Syria Daily: Turkey to US’s Bolton — We Have Implemented “Safe Zone” in Northeast 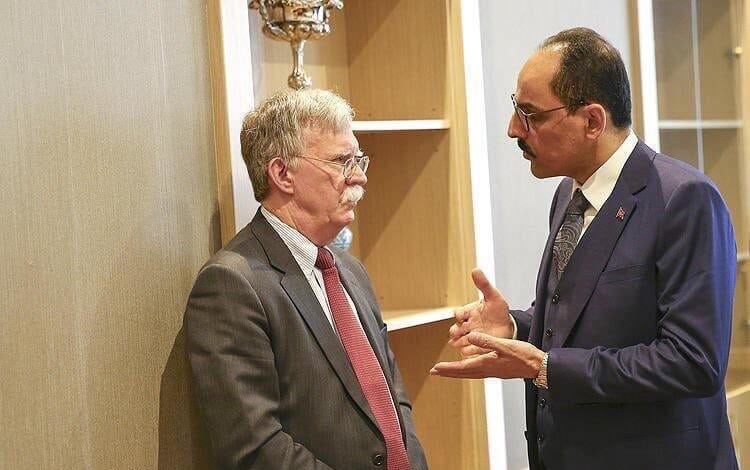 Ibrahim Kalın, the spokesperson for Turkish President Recep Tayyip Erdoğan, told Bolton in a phone call on Wednesday, “Turkish side completed its preparations as part of the implementation of Turkey-US joint operational plan without delay.”

Turkish media did not give Bolton’s response.

Erdoğan lashed out at Washington on Tuesday, “[US officials] say, ‘It’s a very good project,’ but when it comes to take action, we unfortunately see no support. The safe zone is nothing more than a name right now.”

After months of dispute, Turkey and the US agreed in August on patrolling and overflights of a zone along 450 km (250 miles) of the Turkish-Syrian border. But key details were left unclear, including the depth of the area in the Kurdish cantons of Kobani and Cezire.

Turkey is demanding the withdrawal of the Kurdish YPG militia, the leading faction in the US-supported Syrian Democratic Forces which have pushed the Islamic State out of the northeast. Ankara considers the YPG to be part of the Turkish Kurdish insurgency PKK.

A statement from Erdoğan’s office said Kalın and Bolton also discussed “maintaining the Idlib Memorandum”, the demilitarized zone in northwest Syria that has been shattered by a Russia-regime offensive against the last major opposition area in the country.

Last month Russian bombing and regime shelling prevented the Turkish military, which has been in northwest Syria since August 2016, from checking the offensive’s advance in southern Idlib Province. Ankara has condemned the killing of about 900 civilians, wounding of thousands, and displacement of more than 400,000 since late April; however, it has taken no action against Russian airstrikes and regime bombardment.

Russian President Vladimir Putin shut down Erdoğan in a meeting in Moscow last week, insisting that the two leaders agreed on “additional joint steps to neutralize the terrorists’ nests in Idlib and normalize the situation there and in the whole of Syria”.

On Tuesday, Erdoğan said “Idlib is slowly disappearing” but blamed the US rather than Russia for the situation, pointing to an American airstrike last week on the anti-Assad faction Huras al-Din, which is linked to Al Qa’eda:

The Turkish President may meet Donald Trump on the sidelines of the UN General Assembly in New York, scheduled for September 22-25.

A senior Kurdish official said the “safe zone” was off to a good start with Kurdish militia pulling back in a small area near the Turkish border, but said that Ankara’s forces must also be withrawn.

Ilham Ahmed, co-chair of the executive committee of the US-backed Syrian Democratic Council, told the Associated Press on Tuesday, “We seek to find a way to dialogue, and starting to implement this plan expresses our readiness and seriousness.”

Ahmed called on Washington to deploy its troops to oversee the zone: “In the coming days, and because of the needs of the formation and implementation of the security mechanism, they may need more forces. It is not yet clear what the U.S. administration would decide.”

While announcing a joint operations room for the zone, Turkey and the US have not been clear on the ground forces that will patrol the area.