Syria Daily: Erdogan — “Idlib Disappearing”…But Blames US Rather Than Russia 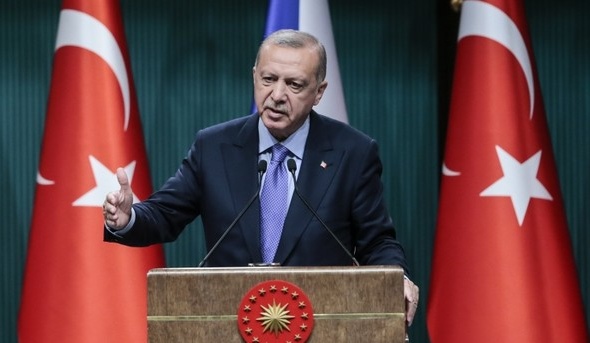 Turkish President Recep Tayyip Erdoğan has said that opposition-held Idlib Province in northwest Syria, under attack by Russia and the Assad regime, is “slowly disappearing” — but is lashing out at the US rather than Moscow.

Erdoğan warned on Tuesday, “Idlib is slowly disappearing. Idlib is being torn down into rubble just like Aleppo”, a reference to the five-month Russian-regime siege, devastation, and assault that took the eastern part of Syria’s largest city in December 2016.

“It is not possible to stay silent against this,” he continued.

However, the Turkish President signaled that Ankara, which has had military forces in northwest Syria alongside anti-Assad rebels since August 2016, will not confront the four-month Russian-regime offensive. Rather than focus on the Russia-regime attacks — which have killed about 900 civilians, wounded thousands, and displaced more than 400,000 as well as seizing almost all of northern Hama and part of southern Idlib Provinces — he emphasized that the US has also begun airstrikes in Idlib.

American warplanes struck a meeting of the anti-Assad faction Huras al-Din, linked to Al Qa’eda, on Saturday. More than 40 fighters were killed, according to US Central Command.

Erdoğan referred to a forthcoming round of the “Astana” talks this month: “We have an upcoming three-way meeting with Russia and Iran. We will discuss what can be done. We hope to take some of the steps before [a UN-convened meeting in] Geneva.”

He also said Idlib would be the most important issue during his meeting with Donald Trump on the sidelines of the the UN General Assembly in New York later in September.

Backing Away from Moscow

Last September Turkey and Russia agreed a demilitarized zone around Idlib and northern Hama. The Turkish military established a ring of 12 observation posts.

However, Assad regime forces periodically shelled posts around Idlib, before and during the offensive that began in late April. In mid-August, as the offensive broke anti-Assad resistance, regime shelling and Russian bombing prevented a Turkish military convoy from taking up positions south of the “ghost town” of Khan Sheikhoun.

The offensive completed the occupation of Khan Sheikhoun and the area to the south two days later. Meanwhile, the Turkish observation at Morek in northern Hama is isolated.

Erdoğan had said that, with Turkey hosting 3.6 million Syrian refugees, the offensive must not cause a new “humanitarian crisis”. Turkish Foreign Minister Mevlüt Çavuşoğlu warned, “The regime needs to not play with fire.”

But Russian President Vladimir Putin quelled Erdoğan in a meeting in Moscow last week. When Erdoğan appealed for a halt to the attacks, including Moscow’s bombing enabling pro-Assad advances, Putin insisted that the two leaders agreed on “additional joint steps to neutralize the terrorists’ nests in Idlib and normalize the situation there and in the whole of Syria”.

Last Friday thousands of Idlib residents, many of them displaced from their homes, approached the closed Turkish border to protest.

Turkey shut the crossings to refugees in 2016.

Erdoğan: “Safe Zone” Only in Name

Erdoğan also complained that the US was not fulfilling an agreement with Turkey for a “safe zone” across two Kurdish cantons in northeast Syria.

After months of dispute, American and Turkish officials agreed on the zone last month along 450 km (250 miles) of the Turkish-Syrian border. But key details were left unclear, including the depth of the area in the Kurdish cantons of Kobani and Cezire.

Turkey is demanding the withdrawal of the Kurdish YPG militia, the leading faction in the US-supported Syrian Democratic Forces which have pushed the Islamic State out of the northeast. Ankara considers the YPG to be part of the Turkish Kurdish insurgency PKK.

Erdoğan said on Tuesday, “[US officials] say, ‘It’s a very good project,’ but when it comes to take action, we unfortunately see no support. The safe zone is nothing more than a name right now.”

See Syria Daily, August 25: While Northwest Burns, Turkey and US Set Up “Safe Zone” in Northeast