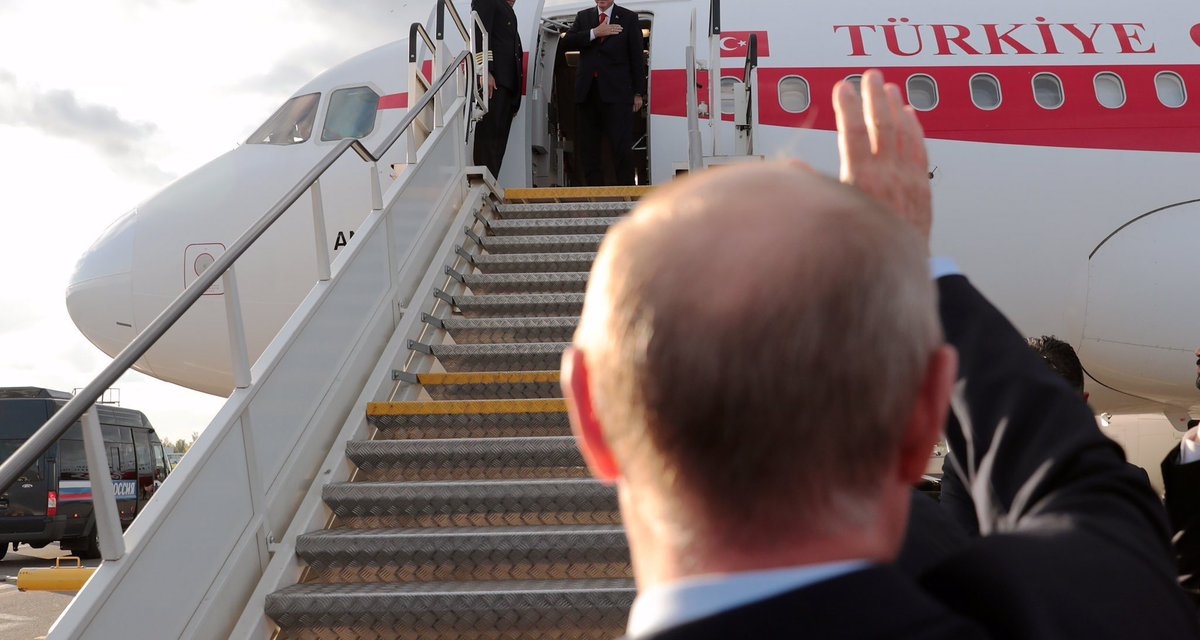 Continuing their deadly attacks on civilians in Idlib Province — and giving an effective response to Turkish President Recep Tayyip Erdoğan’s appeal to Russian counterpart Vladimir Putin to halt the assault — Russian and regime are continuing airstrikes.

One local source told EA, “This is an insane Russian bombing campaign, a dozen Russian jets plus a couple of Assad’s unloading on civilian neighborhoods.”

Throughout the day, the Syria Sentry early warning system has recorded overflights by Russian-made jets every few minutes.

In a further signal to Ankara, one of the strikes was near a Turkish observation post in northern Hama Province.

Air strikes by the Russian air force on the #Turkish observation point in #Sheremgar, west of #Hama pic.twitter.com/LBW5mVfBEM

Meeting in Moscow, Turkish President Recep Tayyip Erdoğan and Russian counterpart Vladimir Putin have sharply differed over the Russian-regime attacks in northwest Syria, on the last major opposition area in the country.

While both cited a commitment to Syria’s “territorial integrity”, Erdoğan challenged the four-month Russia-regime offensive that has taken part of the area while killing almost 900 civilians, wounding thousands, and displacing more than 400,000.

He noted that the offensive had shattered a demilitarized zone around northern Hama and Idlib Provinces, declared by Turkey and Russia last September:

Last year, at a very critical time, we had a deal with Russia and prevented the humanitarian crisis in Idlib. However, regime attacks have been threatening peace in the region since May.

He implicitly referred to a further refugee crisis and his statement, made on Monday, that Ankara is ready to send ground troops into northern Syria to prevent more Syrians joining the 3.6 million already in Turkey: “We have to take the steps when it is mandatory to take them. We have a threat of migration flow towards our borders.”

But Putin ignored Erdoğan’s criticism. Instead, he repeated the claim that the two men agreed on the need to continue the attacks: “Together with Turkey’s president, we have outlined additional joint steps to neutralize the terrorists’ nests in Idlib and normalize the situation there and in the whole of Syria as a result.”

The Russian President paid lip service to his Turkish counterpart’s warning of a humanitarian crisis: “We very well know that Turkey’s burden regarding the refugees is huge. We understand the sensitivities of Turkey very well. President Erdoğan expressed his stance on the issue very clearly today.”

“Not Acceptable to Target Civilians”

The Russia-regime offensive broke anti-Assad resistance this month, seizing all of northern Hama except for a pocket around the Turkish observation post at Morek, on the M5 highway between Aleppo and Homs. The assault also occupied the “ghost town” of Khan Sheikhoun, on the M5 highway, and the area to the south in southern Idlib Province.

About 3 million Syrians — 20% of the country’s remaining population — live in Idlib and northern Hama. Turkish intervened militarily in the area, supporting anti-Assad rebels, in August 2016 to push back the Islamic State.

Erdoğan reiterated on Tuesday, “It is not acceptable for regime to target civilians…raining death on civilians from the air and land under the pretense of battling terrorism”.

A Trade for a Turkish “Safe Zone” in Northeast?

The two men did find common ground on a “constitutional committee”, promised for more than 18 months in the Astana talks between Russia, Turkey, and Iran. ” We wish for Syria to reach its peace as soon as possible,” Erdoğan said.

And Putin endorsed the Turkish effort, joined by the US, for a “safe zone” across Kurdish cantons in northeast Syria as a positive step in “protecting Syria’s territorial integrity”.

After eight months of effort by Erdoğan, Turkey and the US implemented a joint operations room last week to oversee a belt of territory along 450 km (250 miles) of the Turkish-Syrian border, across the Euphrates River and east to the Iraq border.

Important details of the plan, notably the depth of the zone, are still unclear. However, Kurdish officials said Tuesday that the YPG militia had withdrawn 5 km (3 miles) from the border.

The YPG is the leading faction in the US-supported Syrian Democratic Forces, created in autumn 2015 to defeat the Islamic state. But Ankara considers the militia to be part of the Turkish Kurdish insurgency PKK, which has found Turkish security forces for more than 30 years.

Erdoğan used the meeting to maintain pressure on the US:

We want the promise of safe zone to be real. As long as the harassment from the Syrian border continues, there is no way for us to remain silent. We want the terrorists [YPG] to leave Manbij [in eastern Aleppo Province]. Our determination on the issue is full.

Turkey has demanded the YPG’s departure from Manbij, the western-most point of the militia’s presence. However, a “road map” with the US from June 2018, including joint Turkish-US patrols, has yet to be fully implemented.