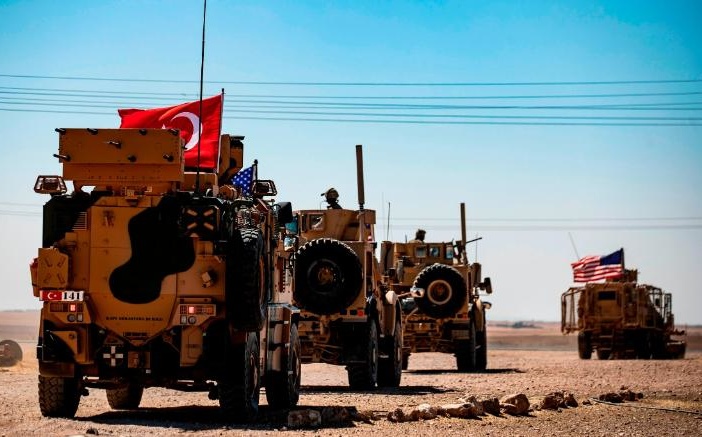 Turkey has stepped up rhetoric against both Kurdish “terrorists” and the US, amid reports of a possible build-up for an offensive in northeast Syria.

Orders from the Turkish Health Ministry have been posted to send more than 50 doctors to a southern region on the border: “[Doctors] will be deployed to Sanliurfa and Mardin Provincial Health Departments in order to carry out health services as part of the Turkish armed forces’s planned cross-border operation in Syria.”

The document, obtained by Rajip Soylu of Middle East Eye, requires the doctors to fulfil a one-month period of service to 20 October, and it cancels all leave indefinitely.

A “Turkish official with knowledge on the matter” confirmed the deployment. “I don’t have anything further to add,” he said.

CNN Turk broadcast images of ambulances and health teams moving near the border in the town of Akcakale in Sanliurfa Province.

“We Will Activate Military Plans”

Earlier this month Turkey and the US began joint patrols of a 450-km (250-mile) “safe zone” along the border and across two Kurdish cantons, extending east across the Euphrates River to the Iraqi border.

Syria Daily, Sept 9: Turkey and US Begin Patrols in “Safe Zone” in Northeast

But the depth of the safe zone was never established — Turkey wanted 30 km (19 miles), while the US sought only 15 km — and Turkish officials immediately began chiding the Americans for supposedly not fulfilling the agreement.

On Thursday, Turkish President Recep Tayyip Erdoğan, said, “If there are no results in two weeks, we will activate our own military plans.”

Defense Minister Hulusi Akar said joint operations will continue as long as they align with Turkey’s interests and aims, but added, “We have completed our preparations. If necessary, we will take the matter into our own hands just as the President [Erdoğan] has said before. Our plans B and C are ready.”

Ankara is demanding the withdrawal of the Kurdish militia YPG from the zone. Turkey considers the YPG to be part of the Turkish Kurdish insurgency PKK, but the militia is the leading faction in the US-supported Syrian Democratic Forces, which has driven the Islamic State out of northeast Syria.

Kurdish groups are seeking an autonomous authority in Kobani and Cezire cantons. Both Turkey and the Assad regime oppose the effort.

A column this morning in Daily Sabah, linked to the Erdoğan Government, chides, “US Sees Turkey’s Concerns, yet Maintains Ties with YPG“.

US officials have sent out conflicting messages.

The American envoy for the anti-ISIS effort in Syria said Washington will stop “penetration” by the Assad regime into the northeast, a day after Damascus called the Syrian Democratic Forces “terrorists” carrying out US and Israeli “schemes” and repeated that it will retake “every inch” of Syrian territory.

James Jeffrey said, “We adhere to…UN Resolution 2254, which makes it clear that there should be a nationwide ceasefire and nobody should be trying to obtain further terrain from anybody else, and that definitely includes the Assad regime. So that’s our position.”

Syria Daily, Sept 16: Assad Regime — We Will Retake “Every Inch” of Kurdish Territory

But Brig. Gen. Scott Naumann, the director of operations for the US-led coalition, said the US will not send additional troops to Syria despite the possible threat to the northeast by both Turkey and the Assad regime.

Defense officials had told CNN that the Pentagon was considering the dispatch of about 150 troops.

But Neumann said Thursday, “We’re not going to increase our footprint on the ground to conduct these patrols because as we see it right now, this is directly linked to our defeat Daesh [ISIS] mission….We have sufficient resources on the ground now.”

Donald Trump ordered the withdrawal of all US forces last December, following a phone call with Erdoğan. But the Pentagon fought back to maintain about 1,000 troops in Syria, to maintain some support for the SDF and to challenge Iran’s influence in the country.

About half of the American forces work alongside the Kurdish-led SDF, while half are at the US base in Tanf near the Iraqi border.

The timelines we set with Turkey, we are on pace to meet, and in many cases, have already put things in place prior to the timelines agreed to.

We’re pretty convinced that as we work with Turkey, the idea of a Turkish incursion into Syria has gone down substantially.