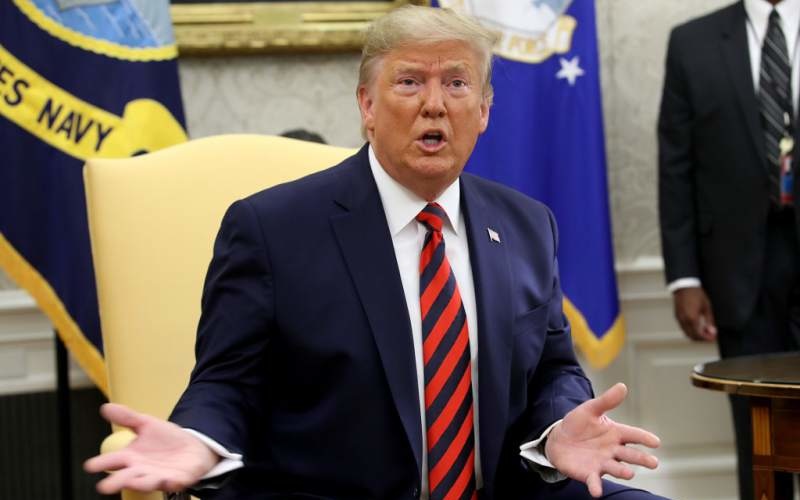 In a late July phone call, Trump asked Zelenskiy “about eight times” to work with Trump’s lawyer Rudy Giuliani, as the Trump campaign tried to dig up political dirt on Biden, Vice President under Barack Obama and a candidate for the Presidency in the 2020 election.

One of The Wall Street Journal’s sources said, “[Trump] told him that he should work with [Giuliani] on Biden, and that people in Washington wanted to know” if supposed allegations against the former Vice President were true.

The source did try to distance Trump from claims of a bargain for Zelenskiy’s cooperation, saying Trump did not mention the White House’s hold-up of $250 million in military aid for Kiev.

On August 12, a US intelligence official filed a complaint about Trump’s risk to foreign policy, which the intelligence community’s Inspector General found to be of “urgent concern”.

That finding triggered a legal requirement to provide the complaint to the House Intelligence Committee, but Director of National Intelligence Joseph Maguire has refused to do so.

On Thursday, The Post reported from its sources that the complaint concerned the Trump-Zelenskiy call. In closed-door testimony to the House Intelligence Committee, Inspector General Michael Atkinson said there were multiple incidents, according to people familiar with the hearing.

Since late 2018, Trump’s attorney Giuliani has sought damaging information from Ukraine on Biden. Trump allies have claimed that, as Vice President, Biden sought to remove Ukraine’s top prosecutor to block an investigation of a Ukrainian gas company with ties to his son, Hunter Biden.

Biden said his intervention with Kiev was because of concerns about corruption. The prosecutor, Viktor Shokin, was dismissed by Parliament in March 2016, a step heralded by the European Union.

But Giuliani, working with two Florida businessman to arrange meetings in five countries about the matter, persisted. In June and August, he met top Ukrainian officials to press his case.

In the August meeting, days after the Trump-Zelenskiy call, Giuliani told Zelenksiy’s aide Andriy Yermak that Ukraine should pursue two cases: that of Hunter Biden and an allegation that Democrats colluded with Ukraine to release information on Trump campaign chairman Paul Manafort during the 2016 election.

“Your country owes it to us and to your country to find out what really happened,” Giuliani said he told Yermak. The attorney claimed Yermak said the Ukrainians were open to pursuing the inquiries, while reiterated a plea for a meeting with Trump to show US support for Ukraine against Russian pressure.

On Thursday, Giuliani initially denied in a CNN interview that he asked any questions about Joe Biden but said seconds later, “Of course I did.”

As Giuliani pressed the Ukrainians, the White House held up the military assistance for Kiev, despite Russia’s annexation of Crimea and Moscow’s backing of separatists in the east of the country.

Last week, Democratic House committee chairs requested the transcript of Trump’s call with Zelenskiy to see if it was part of “President Trump’s effort to coerce the Ukrainian government into pursuing politically-motivated investigations”. Two days later, the White House released the military assistance.

Trump has insisted the story is “Fake News”. He railed on Twitter on Friday:

….statement. Strange that with so many other people hearing or knowing of the perfectly fine and respectful conversation, that they would not have also come forward. Do you know the reason why they did not? Because there was nothing said wrong, it was pitch perfect!

Speaking to reporters, Trump would not say if he asked Zelenskiy to investigate Biden: “It doesn’t matter what I discussed.”

He then repeated his call for the investigation, “Somebody ought to look into that.”