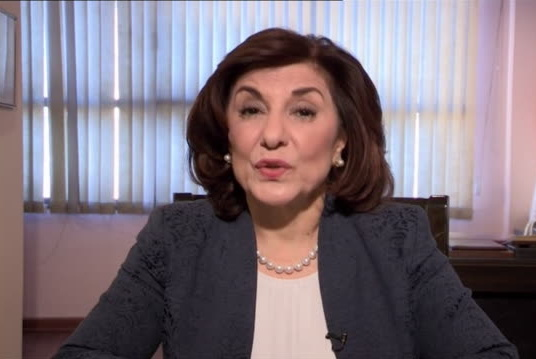 Assad regime senior advisor Bouthaina Shaaban: “We will take every inch of Syria”

The Assad regime has undermined Russia’s declaration of a “ceasefire” in Idlib Province in northwest Syria, the last major opposition area in the country.

On Friday, Russia announced a pause in bombardment which has killed about 900 civilians, wounded thousands, and displaced more than 400,000 since late April, as well as enabling regime forces to recapture almost all of northern Hama Province and part of southern Idlib.

Moscow may have been pushed into the announcement on Friday on by a draft UN Security Council resolution which called for a halt to the attacks, “expressing outrage at the unacceptable levels of violence escalating in and around Idlib Province” and “the indiscriminate attacks in densely populated areas, through an intensified campaign of aerial bombings and the use of barrel bombs”.

Russia will hold the Presidency of the Security Council through September.

But Bouthaina Shaaban, a senior advisor to Bashar al-Assad, quickly dismissed Moscow’s declaration. She told the pro-Assad Lebanese outlet al-Mayadeen late Saturday, that any pause in the assault is temporary to serve the regime strategy “to liberate every inch” of Syria.

She aimed at the Turkish presence in northwest Syria alongside anti-Assad forces, “(Turkish President Recep Tayyip] Erdoğan will be forced to leave Syrian land….This is our decision, not by his choice.”

Despite the “ceasefire”, Assad forces shelled parts of Idlib on Saturday, killing a man in Kafranbel.

At the start of August, after Russia, Turkey, and Iran held political talks in the Kazakh capital Astana, the regime announced a halt to attacks. However, the offensive was resumed four days later and — enabled by intensive Russian airstrikes and advisors on the ground — broke through anti-Assad resistance to sweep up northern Hama and move through southern Idlib, including the capture of Khan Sheikhoun on the M5 highway between Aleppo and Homs.

Russia added a level of brutal irony on Sunday, criticizing a deadly US airstrike for its challenge to Russian-regime attacks in the northwest.

On Saturday, American warplanes struck the operations room of the anti-Assad faction Huras al-Din, which is linked to Al Qa’eda. The raid reportedly killed more than 40 fighters of Huras al-Din and its ally Ansar al-Tawhid.

The Russian Center for “Reconciliation” said the strike violated “deconfliction” arrangements between the American and Russian militaries, since the US gave no advance notice. The Center said American operations, given the US criticism of “alleged” Russian “shelling” in Idlib, was “raising eyebrows”.

“If Russia is serious about its concerns for the displaced and civilians in Syria, it should use its influence with the Assad regime to end indiscriminate aerial bombardments targeting civilians, humanitarians, and infrastructure.