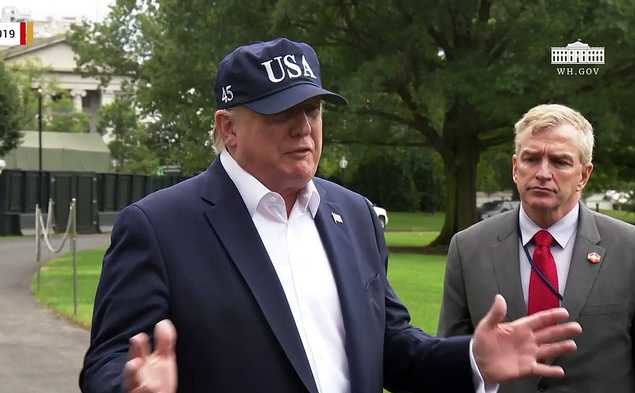 Donald Trump dismisses any significant action over gun control, including background checks on buyers, after the latest US mass killing.

Trump told reporters on Sunday said that the killing of seven people in Midland and Odessa, Texas “really hasn’t changed anything”:

We are in the process of dealing with Democrats and Republicans, and there’s a big package of things that’s going to be put before them by a lot of different people I’ve been speaking to a lot of senators, a lot of house members, Republicans, Democrats — this really hasn’t changed anything, we’re doing a package and we’ll see how it comes about. That’s irrespective of what happened yesterday in Texas.

Over the last five, six, or seven years, no matter how strong you need the background checks, it wouldn’t have stopped any of it.

Another 22 people were injured on Saturday when the gunman fired at random after a traffic stop. Police said the attacker, who reportedly had been fired from his trucking job hours earlier, used a semi-automatic weapon.

The assault came four weeks after a gunman, publishing an anti-immigrant manifesto that paralleled Trump’s language, killed 22 people and wounded 24 in El Paso, about 250 miles to the west of Midland and Odessa. Hours later, nine people were slain in a half-hour in Dayton, Ohio.

As he had after a mass killing at a Parkland, Florida high school in February 2018, Trump said he was considering action such as background checks. However, he backed away amid a phone call with National Rifle Association head Wayne LaPierre.

Later on Sunday, Trump continued his attempt to blame mental illness rather than addressing the prevalence of guns, speaking of “strong measures to keep weapons out of the hands of dangerous and deranged individuals, and substantial reforms to our nation’s broken mental health system”: “To reduce violence, we must also ensure that criminals with guns are put behind bars and kept off the streets.“

Addressing “Domestic Terrorism”, But Not Guns

On Sunday, Acting Homeland Security Secretary Kevin McAleenan said the attacks “absolutely are a homeland security threat. In our counterterrorism strategy and approach, domestic terrorism has taken a front line focus for us.”

He said an office had been formed to address “targeted violence and terrorism prevention, with an explicit focus and balance on domestic terrorism, including racially motivated violent extremism, which we’ve seen much too much of in the recent weeks and months.”

But McAleenan said nothing about the more than 300 million guns in the US.

Beto O’Rourke, who represented El Paso, Texas in the House, called for universal background checks, red flag laws, and buying back weapons like the AR-15 semi-automatic weapons from owners. Former Housing and Urban Development Secretary Julian Castro said he would “maximize executive authority” to combat gun violence and put “as much pressure” as possible on Republican senators for a gun control bill.

GOP Sen. Rick Scott said, “There’s too many people that have mental illnesses that we’re somehow not addressing and they have access to weapons and they shouldn’t.”