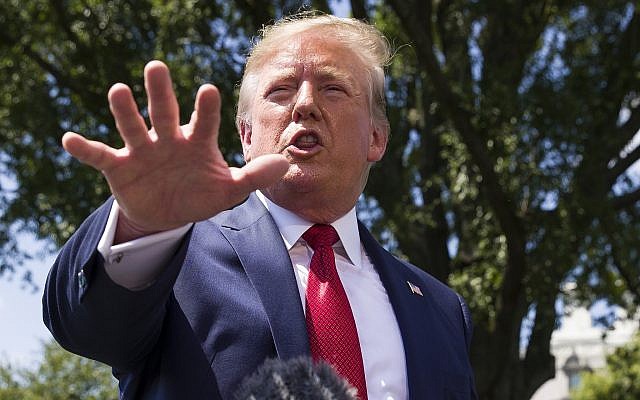 Donald Trump flounders over signs of an economic downturn and a record Government debt, as reported job gains are cut by more than 500,000.

At the start of the week, White House officials said they were considering a payroll tax reduction, countering signals of a downturn and possible recession threatening Trump’s re-election effort in 2020.

Senior Administration officials denied the discussions, but Trump then said he was considering the measure, last used in 2011-2012 to spur a sluggish recovery after the 2008 Great Recession.

However, Trump reversed on Wednesday, backing away from both the payroll tax reduction and a decrease of capital gains taxes.

It was unclear if Trump was influenced by forecasts that the Federal Government’s record-setting debt, fueled by his December 2017 tax-cut package, will be more than $1 trillion in the 2020 fiscal year which begins October 1.

The Congressional Budget Office released its updated projections on Wednesday. In May, the office said it expected a deficit of $896 billion in Fiscal Year 2019 and $892 billion for FY 2020.

Tax revenues for 2018 and 2019 have fallen more than $430 billion short of predictions from June 2017, before the passage of the Administration’s bill for $1.5 trillion in tax cuts.

The Administration has significantly raised defense spending, and also increased non-military domestic expenditure. The debt and growth may also be worsened by the effects of Trump’s trade wars with China and other countries. The CBO summarized:

One likely reason for the lower-than-expected receipts is that some parts of the economy have been weaker than CBO projected in April 2018. A number of developments other than the tax act appear to have contributed to that weakness, including increases in tariffs, greater uncertainty about trade policy and slower economic growth in the rest of the world.

The projections come as Congress is facing debate both to approve Government spending and to raise the debt ceiling by September 30.

On Wednesday the Labor Department said employers added 500,000 fewer jobs in 2018 and early 2019 than previously reported.

Drawing on more definitive data from state unemployment insurance records, the Department set out the position through March. Final updates, including the rest of 2019, will be released in February.

Significantly, for Trump’s ego and his declaration of historic growth, the new figure of just over 2 million new jobs per year is about the same as that in the final year of the Obama Administration in 2016.

While not covering the past five months, the revision adds to signs that Trump’s self-proclaimed boom is not only smaller than declared, but may be reversing. Growth fell to 2.1% from April through June, down from almost 3%. Consumer confidence hit a seven-month low in July, with the measure of economic strength at its lower point since late 2016.

Last week, the bond market had an “inverted yield curve” — in which interest on short-term bonds is greater than that for 10-year bonds — for the first time since the 2008 Great Recession. The inversion of the curve has been an unfailing signal of recession over the past 50 years.

White House officials had acknoledged that they had no plans for a downturn, in part because this might fuel Trump’s anger. Trump and his officials continued on Sunday to declare that all is well with the economy.

That changed on Monday with the leaks to the press of the consideration of the payroll tax cut.

On Twitter and in his appearance on the White House lawn, Trump continued his tactics of declaring his mastery of the economy while blaming the Federal Reserve for any limit on growth:

…..We are competing with many countries that have a far lower interest rate, and we should be lower than them. Yesterday, “highest Dollar in U.S.History.” No inflation. Wake up Federal Reserve. Such growth potential, almost like never before!