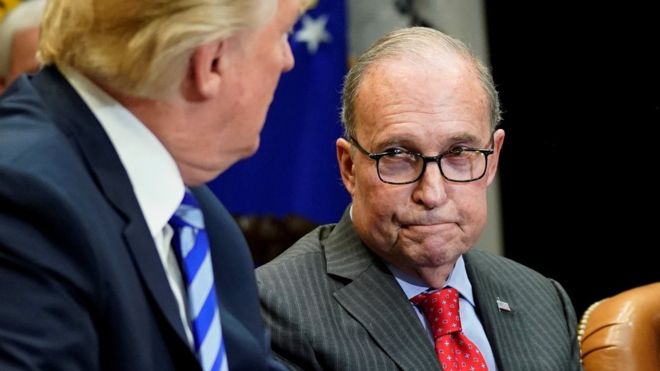 White House officials have finally begun consideration of plans to stave off a recession, amid gathering signs of an economic downturn threatening Donald Trump’s re-election bid.

“Three people familiar with the discussions” said a payroll tax reduction is being explored to boost the economy through more money to workers. The Obama administration used a two-year payroll tax cut in 2011 and 2012, stimulating a sluggish recovery from the 2008 Great Recession.

But wary of Trump, who maintained on Sunday that the economy is “doing tremendously well” and on Monday that it is “very strong”, Administration officials said the idea has not been discussed with him. The plan would also need Congressional approval.

White House aides said last week that they were not considering any plans to deal with a downturn, despite a warning from the bond market of a possible forthcoming recession, a fall in consumer confidence, and a measure of current economic conditions at its lowest point since late 2016.

Trump declared to reporters on Sunday that “consumers are rich, tax-cut loaded up with money”. He falsely claimed that his trade wars with China and other countries “cost nothing or very little”. His top economic advisors Larry Kudlow and Peter Navarro maintained, “We’re doing pretty darn well.”

The tension between a necessity to plan and the assuaging of Trump’s feeling led to confusion.

A White House official said more tax cuts were on the table, “but cutting payroll taxes is not something that is under consideration at this time”. Another “senior administration official” denied the option was under serious consideration. And a third said discussions were hypothetical and not being explored with urgency.

The White House finally put out a statement: “As [National Economic Council Director Kudlow] said yesterday, more tax cuts for the American people are certainly on the table, but cutting payroll taxes is not something under consideration at this time.”

The White House sources also said it is unlikely that Trump would step back further from tariffs imposed on Chinese goods, with his denials that US consumers, manufacturers, and farmers are being affected.

Last week Trump delayed or suspended the imposition of 10% tariffs on $325 billion of Chinese products, which would have meant that all imports — including smartphones, laptop customers, and children’s toys and books — are now charged.

However, tariffs are proceeding on $116 billion of products on September 1 and on $160 billion on December 15. Trump is also maintaining his threat to raise the tariff from 10% to 25% on the $250 billion of Beijing’s goods punished last year.

Under the payroll tax, workers pay 6.2% on the first $132,900 of earnings, and employers pay another 6.2%. The revenues fund programs such as Medicare and Social Security.

White House advisers, including Kudlow, are also suggesting that investors could pay lower taxes on profits when they sell investments. They are also discussing a plan to reduce capital gains taxes without an act of Congress, but this is opposed by Treasury Secretary Steven Mnuchin.

The officials did not comment on the effect on the unprecedented Federal Government debt of more than $1 trillion a year, fed by the Administration’s $1.5 trillion tax-cut package in December 2017.

Trump continued his detached-from-reality Twitter commentary on Monday, insisting all is fantastic and blaming the Federal Reserve for any issues:

…..The Fed Rate, over a fairly short period of time, should be reduced by at least 100 basis points, with perhaps some quantitative easing as well. If that happened, our Economy would be even better, and the World Economy would be greatly and quickly enhanced-good for everyone!

Trump has repeatedly bashed the Federal Reserve and its chairman Jerome Powell for not cutting interest rates, despite the risk of inflation and the effect on financing of the Federal Government’s debt.