TrumpWatch, Day 941: Trump and Officials on Economy’s Downturn — All Is Well 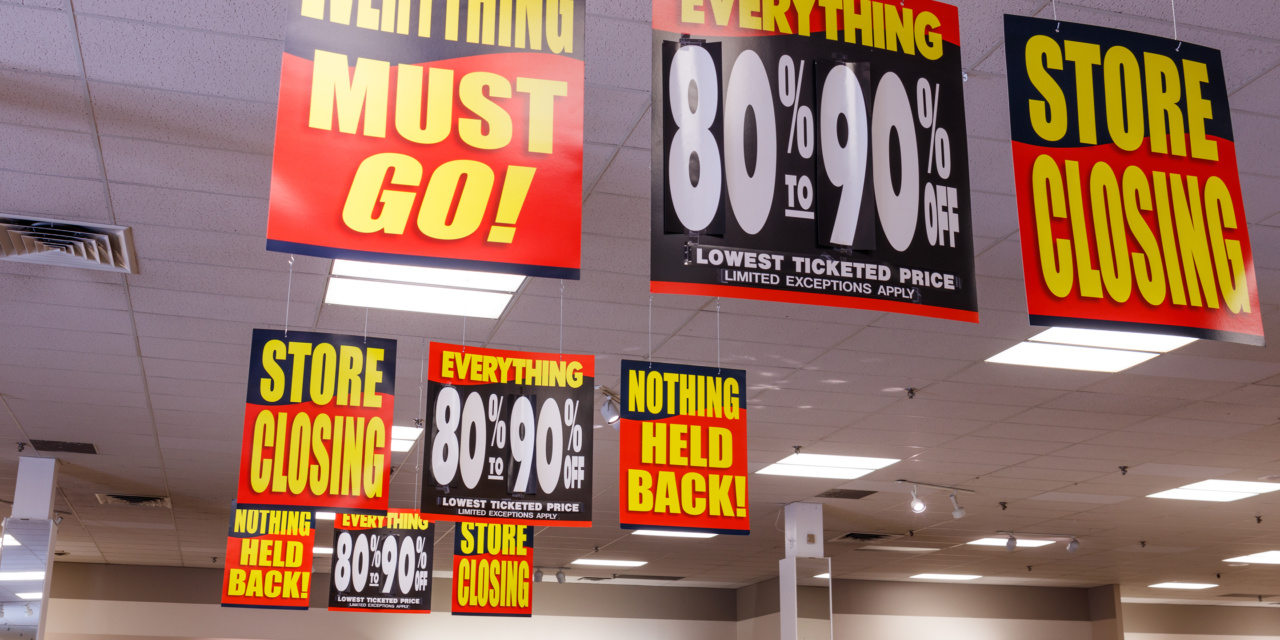 Signs in the women’s retailer Avenue, which is closing all 222 stores

Donald Trump and his officials pursue an all-out effort to deny indications of the US economy’s downturn, jeopardizing Trump’s re-election effort.

After a week of signals of slowing growth and even a possible recession, the Administration used Twitter, statements, and Sunday talk show appearances to dismiss economic news and put out their own reality — often distorting information and forecasts.

Analysts noted that Trump’s trade wars and the unprecedented Federal Government deficit — fueled by the December 2017 tax cuts and more than $1 trillion this year — may be beginning to erode the economy. Growth, which had been at 3% amid the tax-cut bubble, fell to 2.1% between April and June.

But Trump insisted to reporters on Sunday that “most economists” — despite estimates of the cost of Trump’s tariffs on China and other countries at $1.3 trillion, even before a planned expansion of duties on Beijing on September 1 and December 15 — “say we are not going to have a recession”.

“We are doing tremendously well,” Trump said as he left his New Jersey golf resort for Washington, “Consumers are rich, tax cut loaded up with money.” He falsely said, “The tariffs have cost nothing or very little.”

Trump clung to an announcement by the retail giant Walmart that its earnings rose 2.8% in the three months up to July 31. The chain has benefited from struggling competitors and a 37% expansion of its online transactions.

Ignoring all other retailers, Trump said, “I saw Walmart numbers through the roof, better than any poll.”

Trump inadvertently highlighted another red flag for a US downturn with slow and even negative growth in other economies: “[They are] not doing well like we are doing, the rest of the world, if you look at Germany, if you look at European Union, frankly, look at the UK, look at a lot of the countries.”

Trump did not note that Germany’s fall of 0.1% in growth from April to June was due in part to his trade war with China, with German exports significantly affected. Nor did he mention that the UK’s 0.2% drop is mainly because of uncertainty over a No Deal Brexit from the European Union, which Trump and his Administration have encouraged.

He defended the trade war with China, despite the cost and last week’s partial retreat by delaying or suspending some new tariffs:

Senior White House advisors covered for Trump with their own rewriting of economic information, in appearances on Sunday political talk shows.

The chief economic advisor, Larry Kudlow, “No, I don’t see a recession. And let me add just one theme….Just one theme. We’re doing pretty darn well, in my judgment. Let’s not be afraid of optimism.”

Kudlow repeated the Walmart line: “We had some blockbuster retail sales, consumer numbers towards the back end of last week. Really blockbuster numbers.”

He claimed without support, “Most economists on Wall Street towards the end of the week had been marking up their forecasts for the third and fourth quarter. That echoes our view,” and he repeated Trump’s attacks on the Federal Reserve for not cutting interest rates with its “monetary tightening”.

The Federal Reserve has held off on reducing rates to avoid any fueling of inflation, amid the Government’s unprecedented debt, but did drop the level last month for the first time in 11 years in a “one-off” move.

Peter Navarro, a hardline supporter of the trade war, insisted that the signal of recession had not occurred as the bond market’s yield curve was “technically” not inverted.