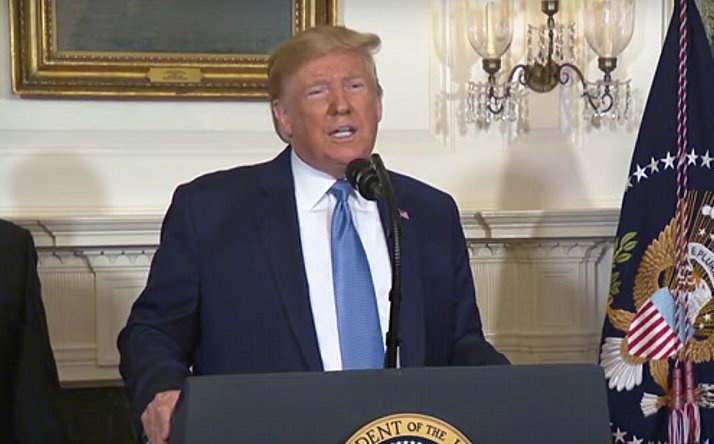 Donald Trump’s staff scramble to protect him after his anti-immigrant language is linked to Saturday’s mass killing in El Paso, Texas.

The suspect, Patrick Crusius, posted a 2,000-word anti-immigrant statement just before he drove 650 miles across Texas to kill 20 people and wound 26 in a mall. He amplified Trump’s repeated declarations of a migrant “invasion” of the US, saying immigrants were replacing white Americans. He pronounced that immigration should go back to their countries — an echo of Trump’s declaration last month about four Democratic Congresswomen of color, three of whom were born in the US and the 4th a citizen who came to America at age 12 from war-torn Somalia.

Trump was relatively muted on Sunday, staying away from Twitter and only appearing in the afternoon to speak to reporters. He praised the “incredible people” of El Paso and Dayton, where nine people were slain and 27 wounded early Sunday; hailed law enforcement, and said — in sharp juxtaposition to his language about immigrants, people of color, the media, and Democrats — “Hate has no place in our country. We’re going to take care of it.”

He did not utter a word about gun control nor about Crusius’s statements about immigrants.

With criticism unabated, White House staff sent Trump into the White House’s Diplomatic Reception Room on Monday morning to read a prepared statement from a teleprompter.

Sniffing, stumbling over words, and mistakenly calling Dayton “Toledo”, Trump finally addressed the anti-immigrant manifesto behind the El Paso killings, “In one voice our nation must condemn racism, bigotry and white supremacy. These sinister ideologies must be defeated.”

Trump did not refer to his language about immigrants or his refusal to speak about white supremacy before Monday.

The statement was reminiscent of Trump’s appearance in August 2017, days after white supremacists had violently marched through Charlottesville, Virginia, killing a woman and injuring dozens. Having inflamed the situation by blaming “both sides”, he finally issued a statement from Trump Tower in New York to “condemn in the strongest possible terms this egregious display of hatred, bigotry and violence”.

But he immediately went off-script to defend the marchers — “Many of those people were there to protest the taking down of the statue of Robert E. Lee” — and return to his both sides theme: “You had a group on one side and you had a group on the other, and they came at each other with clubs and it was vicious and it was horrible.”

Trump did not make a quick reversal yesterday, calling Crusius’s statement as one “consumed by racist hate”. He directed the Justice Department to pursue legislation for the death penalty for “those who commit hate crimes and mass murders”. But he tried to shift blame with a scatter-gun citation of the Internet, video games, and mental illness as causes.

Early Monday morning, before the statement, Trump also tried to pin responsibility on the media:

The Media has a big responsibility to life and safety in our Country. Fake News has contributed greatly to the anger and rage that has built up over many years. News coverage has got to start being fair, balanced and unbiased, or these terrible problems will only get worse!

Trump offered a glimmer of action in his early-morning tweets with a call for bipartisan passage of legislation for “strong background checks”. However, he made no reference in the statement to the proposal.

“It took less than three hours for the President to back off his call for stronger background check legislation,” Speaker Nancy Pelosi and Senate Majority Leader Chuck Schumer said in a joint statement.

House Democrats passed the measure in February, but the Republican-controlled Senate has not considered it.

After other mass killings, Trump has broached the possibility of background checks, raising the age limit on possession of some weapons, and a ban on bump stocks that enable rapid firing. But he has pulled back on all occasions, sometimes after meetings with the National Rifle Association.

Controversially, Trump also appeared to cling to his anti-immigrant theme, saying that the background checks should be linked to “immigration reform” — a phrase that could cover further implementation of his Administration’s “zero tolerance” of migrants and threats to deport legal immigrants.

Monday’s appearance was set up on Sunday night when Trump’s son-in-law Jared Kushner and aides said Trump needed to do more to deal with criticism. They considered background checks, but first drafts of the statement did not mention them or “immigration reform” — so Trump’s Twitter burst caught his own staff by surprise.

Just before the speech, several aides said the linkage of the two proposals was a mistake, and they were deleted from the prepared remarks.