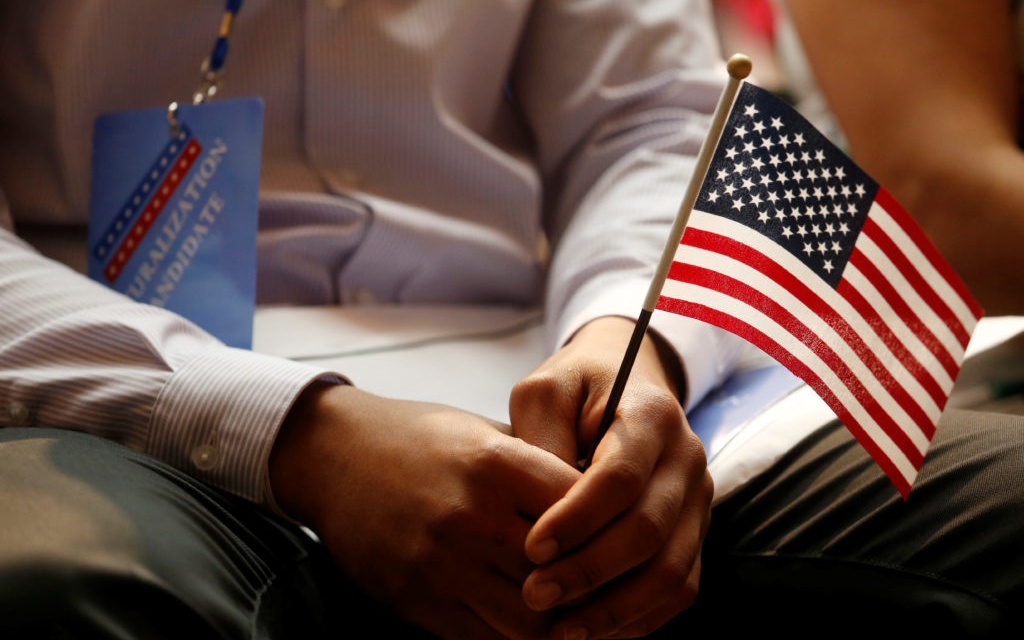 A new citizen holds an American flag at a naturalization ceremony at the New York Public Library, July 3, 2018 (Shannon Stapleton/Reuters)

On Monday, the Administration implemented a 832-page regulation to turn down applicants for visas and “green card” permanent residency if they have low incomes, limited education, or have used public benefits such as Medicaid, food stamps, and housing vouchers.

The measure goes into effect in 60 days.

The Department of Homeland Security tried to use the “public charge” rule, applying the public assistance provision to about 26 million immigrants. The effort was blunted by overwhelming opposition among more than 266,000 comments, such as on the risks to older immigrants with disabilities.

But in May, a draft regulation was circulated. Two weeks later, Trump announced a proposal restricting immigrants from being joined by family members, in favor of admitting “skilled” people.

Francis Cissna, the former director of Citizenship and Immigration Services, had resisted the rush to issue the regulation. But amid a Miller-led purge of “weak” officials, he was forced out and replaced by Kennith Cuccinelli, an immigration hardliner sharing Miller’s views.

The steps accompany the Administration’s “zero tolerance” effort to block asylum seekers from entering the US, put border-crossers into detention, and Trump’s command for raids to seize “millions” of undocumented immmigrants.

Cuccinelli said Monday in the White House that the regulation to restrict visas and green cards will encourage “self-reliance and self-sufficiency for those seeking to come to or stay in the United States”.

Asked about the targeting of low-income immigrants, Cuccinelli explained:

We certainly expect people of any income to be able to stand on their own two feet, so if people are not able to be self-sufficient, than this negative factor is going to bear very heavily against them in a decision about whether they’ll be able to become a legal permanent resident.

But he maintained that the Administration was still upholding the Statue of Liberty’s invitation to “give me your tired, your poor, your huddled masses”: “I’m certainly not prepared to take anything down off the Statue of Liberty. We have a long history of being one of the most welcoming nations in the world.”

The White House put out a deceptive tweet, trying to portray the regulation as an implementation of policy under Democratic President Bill Clinton in the 1990s.

JUST ANNOUNCED: President @realDonaldTrump will enforce a Clinton-era law to ensure that non-citizens do not abuse our public benefit programs and jeopardize the safety net needed by vulnerable Americans. https://t.co/UrZF4mCP6Q

In fact, the 1996 “public charge” rule — applied to someone who is “primarily dependent” on Government assistance, supplying more than half of income — only counted cash benefits. Few people were rejected from stay in the US on these grounds, experts said.

President Trump’s new public charge rule is yet one more example of his Administration turning its back on people fighting to make a better life for them and their families.

Under this rule, children will go hungry; families will go without medical care. I am committed to defending all of New York’s communities, which is why I intend to sue the Trump Administration over this egregious rule.

Robert Greenstein, President of the Center on Budget and Policy Priorities, assessed, “The rule reflects a dark vision of the United States — as an unwelcoming nation that wants to keep out people who seek to join their family, work hard, and climb the economic ladder — based on the erroneous assumption that they won’t contribute to our communities, our economy, and our nation.”

About one in seven adults in immigrant families did not participate in a non-cash safety net program last year because of fear of losing green card status in the future, according to an Urban Institute study.

Among low-income immigrant families, the figure was more than one in five.

There are exceptions to the regulation, such as benefits received by an active duty member of the military, and Medicaid for pregnant women, children under 21 years old, and emergency medical care. The rule does not apply to refugees or asylum seekers.

But publishing the regulation on Monday, the Federal Register acknowledged, “While some commenters provided support for the rule,” it said, “the vast majority of commenters opposed the rule.”