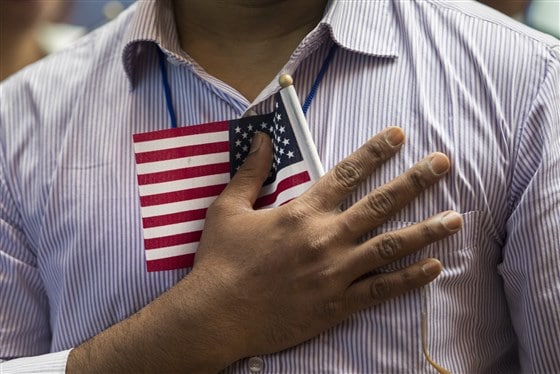 In its latest move to restrict immigration, the Trump Adminstration is barring green cards for immigrants who receive public aid.

Officials announced Saturday that those who legally use public benefits such as food assistance and Section 8 housing vouchers may be denied visas.

If fully implemented, the measure will force millions of poor immigrants to decide between accepting aid and pursuing a green card to live and work legally in the US.

Older immigrants, who receive low-cost prescription drugs through the Medicare Part D program, may also be forced to refuse them or risk being deemed a “public charge” ineligible for legal resident status.

The Administration said about 382,000 people a year will be affected.

Federal law has taken into consideration the acceptance of cash benefits, but the Government has never before considered public benefits such as food aid.

Immigrants may be asked in some cases to post cash bonds of at least $10,000 to avoid being denied green cards.

The Department of Homeland Security said the new rule will “ensure that those seeking to enter and remain in the United States either temporarily or permanently can support themselves financially and will not be reliant on public benefits”.

This is an attack on immigrant families and an attempt to make our immigration system a pay-to-play system where only the wealthy need apply. This is a radical transformation of our immigration, and does a runaround on Congress.

Having pursued a “zero tolerance” policy with undocumented immigrants, including the separation of children from parents, Administration officials such as Stephen Miller are pursuing steps to cut legal immigration and possibly force those legally in the US to leave.

The plan to use the lever of public assistance was first reported in August.

In 2015-2016, the last full fiscal year under the Obama Administration, 1.2 million immigrants became lawful permanent residents. In the first quarter of fiscal year 2017-2018, the Trump Administration was on track for a decline of 20%.

The FBI Agents Association, a group representing thousands of current and former FBI agents, has criticized Donald Trump’s latest insult of the agency:

As we have said, Attacks on our character and demeaning comments about the FBI will not deter Agents from continuing to do what we have always done—dedicate our lives to protecting the American people. https://t.co/HwOnBBkd20

On Friday night, Trump — in his latest attempt to push back the Trump-Russia investigation and concern within his Administration, told a Las Vegas rally that he was going to get rid of the “lingering stench” in the FBI and the Justice Department.

Trump’s remarks came hours after The New York Times reported that Deputy Attorney General Rod Rosenstein had discussed the Cabinet invoking the 25th Amendment to remove the President from office, and had proposed secretly taping conversations with Trump.