UN officials have announced they will carry out a five-day mission inside the besieged Rukban camp in southeast Syria, assessing up to 11,000 Syrians who remain — but are raising concerns that they are putting the displaced under duress to return to home areas, despite concerns about safety.

The UN has sent a message to residents that the mission will begin on Thursday and last until next Tuesday, “to assess the number of persons wishing to leave Rukban” to areas controlled by the Assad regime “in order to facilitate their subsequent transfer”.

The UN added, “A needs assessment will also be conducted for those who have expressed an interest in staying at Rukban.”

Some residents and pro-opposition activists noted that the UN said no humanitarian aid will be provided during the evaluation phase, while assistance is offered in the second stage when residents are transported out of Rukban.

They also noted that the UN will be accompanied by the Syrian Arab Red Crescent, who have overseen what the residents and activists see as “forced returns”. The SARC has manned checkpoints and the shelters to which residents have been moved, with only rare visits by UN staff.

The UN message said there will be eight registration points for those who finally depart after a siege of almost a year, with the Assad regime cutting the main route into the camp and allowing only two aid convoys since January 2018. Starvation is a threat, with food scarce and expensive, and medical supplies are almost exhausted.

When UN staff were last in the camp in February, their survey found more than 90% of the residents — about 50,000 at the time — wanted to return to home areas, which they fled since 2015 amid Islamic State attacks.

However, almost all expressed worries over detentions, forced conscriptions, and harassment by the Assad regime as well as uncertainty over the status of their property. Men have been killed by regime security forces in the centers in Homs Province, with many others taken away for interrogation.

Syria Daily, May 3: More Departures from Rukban Camp — and More Claims of Disappearances

During this mission, the Red Crescent will fill out questionnaires. They also will provide IDs with personal information.

The UN said that, for those who still wish to remain in Rukban or have not yet decided, there will be meetings between its staff and community representatives, “to assess key needs and understand the requirements of those who have chosen to stay in Rukban to try to find sustainable solutions”.

The UN said the departure of people from Rukban is “voluntary”. It said “relief items will be provided”, but did not indicate if it will override the veto of the Assad regime to arrange aid convoys for those who stay.

Instead, “the type and amount of assistance will be determined after the needs assessment is completed”, the message summarized.

The UN goes to great lengths with assurances for those who will now leave the camp, emphasizing that “all available transportation is completely free, you can bring all your personal belongings”.

Up to now, those leaving Rukban have had to pay a fee for transport back to their home areas. 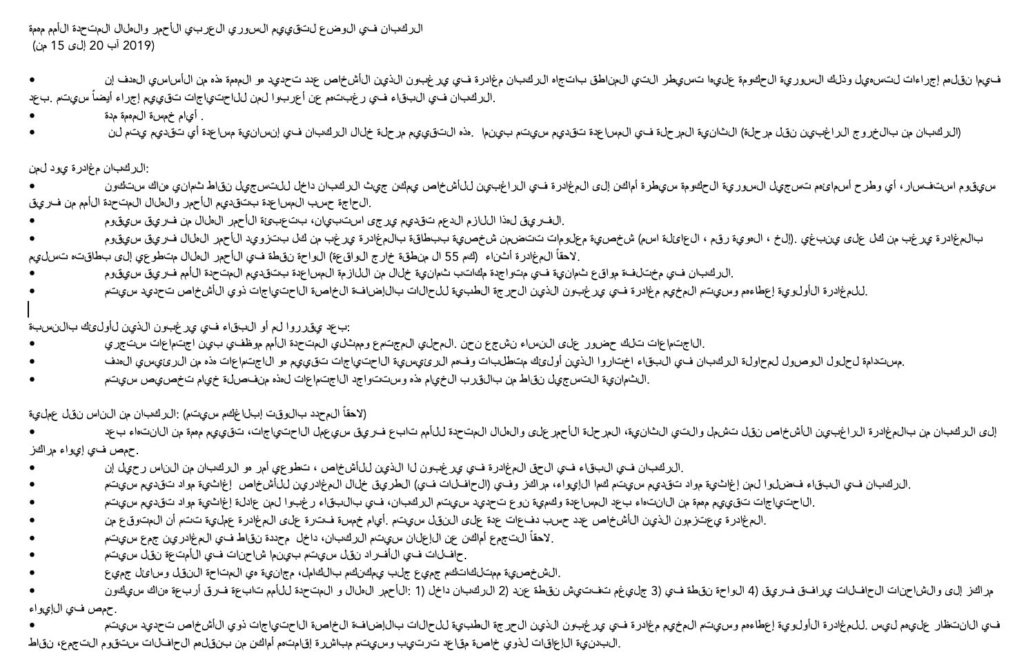