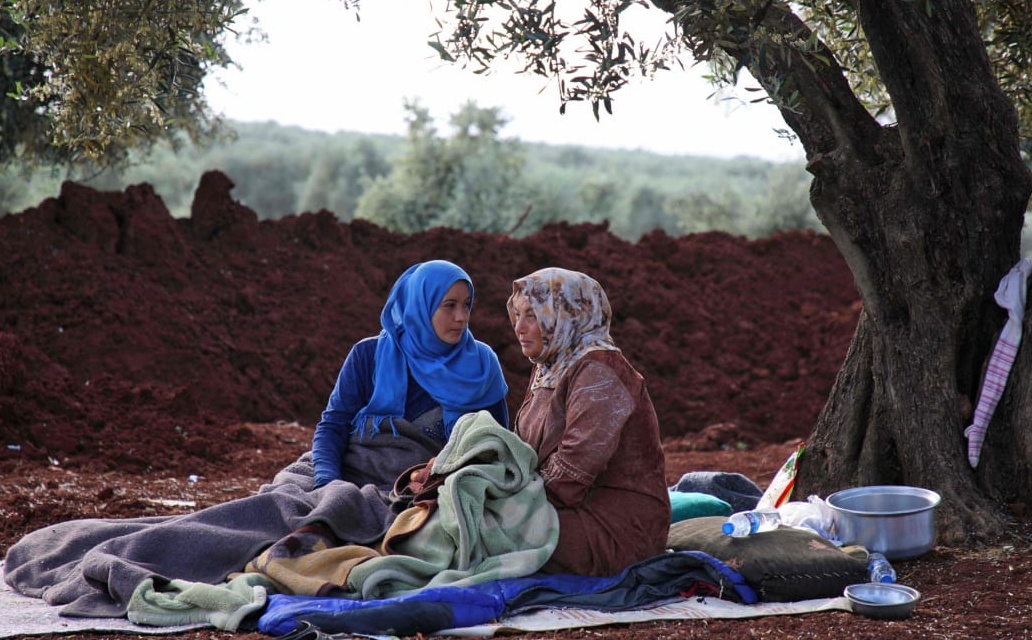 Displaced women sit in a field near a camp in northwest Idlib Province, May 8, 2019

UN officials warned on Thursday that renewed Russian-regime attacks in northwest Syria threaten “the lives of millions of civilians”.

Since the launch of an offensive in late April, bombing and shelling has killed more than 700 civilians, wounded more than 2,200, and displaced more than 400,000. The area hosts about 3 million people — 20% of Syria’s remaining population.

Panos Moumtzis, the UN’s humanitarian chief for Syria, said after a meeting in Geneva that included envoys from Russia:

These people don’t know where to go. A total panic has resumed again. It is like playing with fire at the moment and we worry about it coming out of control.

Najat Rochdi, Moumtzis’s senior humanitarian adviser, summarized, “A new wave of violence is again threatening the lives of millions of civilians who live in the Idlib area.” She noted that many civilians had returned to homes during the brief Russian-regime pause in attacks, but are now at great risk.

Moumtzis added, “We have so far 39 health facilities, 50 schools, water points, markets, bakeries, and multiple civilian neighborhoods who have received a direct hit.”

“A Threat for Turkey and Rest oF Europe”

Supporting Assad forces, intense Russian airstrikes brought one of the first advances for the offensive in more than two months, with the capture of the village of Zakah on Wednesday.

The success opens the way for a further drive on the towns of Kafrzita and Lataminah — both heavily bombarded for weeks — and then towards the M5 highway between Aleppo and Homs.

#Syria: past 2 days towns of #KafrZita & Lataminah (N. #Hama) were hit by one of most severe bombardment in recent years. Aim is to prepare ground assault by pro-Assad forces. https://t.co/Im8bYdag2X pic.twitter.com/pOxlspEMm4

The offensive captured several towns and villages in its first two weeks, but stalled amid resistance by the Turkish-supported National Liberation Front and the Islamist bloc Hay’at Tahrir al-Sham. Anti-Assad counter-attacks regained part of northwest Hama in June, with raids seizing weapons and inflicting casualties.

The UN’s Moumtzis warned of a new wave of refugees, adding to the more than 5.6 million Syrians who have left the coutnry: “All this is happening at the doorstep of Turkey, so there is a threat for Turkey, a direct impact with massive displacement of people toward the north, heading toward Turkey and of course a threat for the rest of Europe.”

Ankara has been silent about the renewed Russian-regime attacks. This morning Daily Sabah, close to the Erdoğan Government headlines, “Witnesses of Idlib Catastrophe Describe Horror as Humanity Fails Them”.

Last week the head of the UN’s humanitarian agency, Mark Lowcock, cited “a level of destruction consistent with a bombing campaign aimed at a scorched-earth policy”. The UN’s human rights head Michelle Bachelet detailed the “war crimes” of the assaults on markets, hospitals, bakeries, and other sites, and criticized the “failure of leadership by the world’s most powerful nations” with their “collective shrug”.

Russian State English-language media is silent about the latest attacks on civilians. Instead, TASS carries a statement from the Russian Center for “Reconciliation”: “Militants operating in the Idlib de-escalation zone opened fire at the city of Aleppo and 18 settlements in the provinces of Hama and Latakia.”