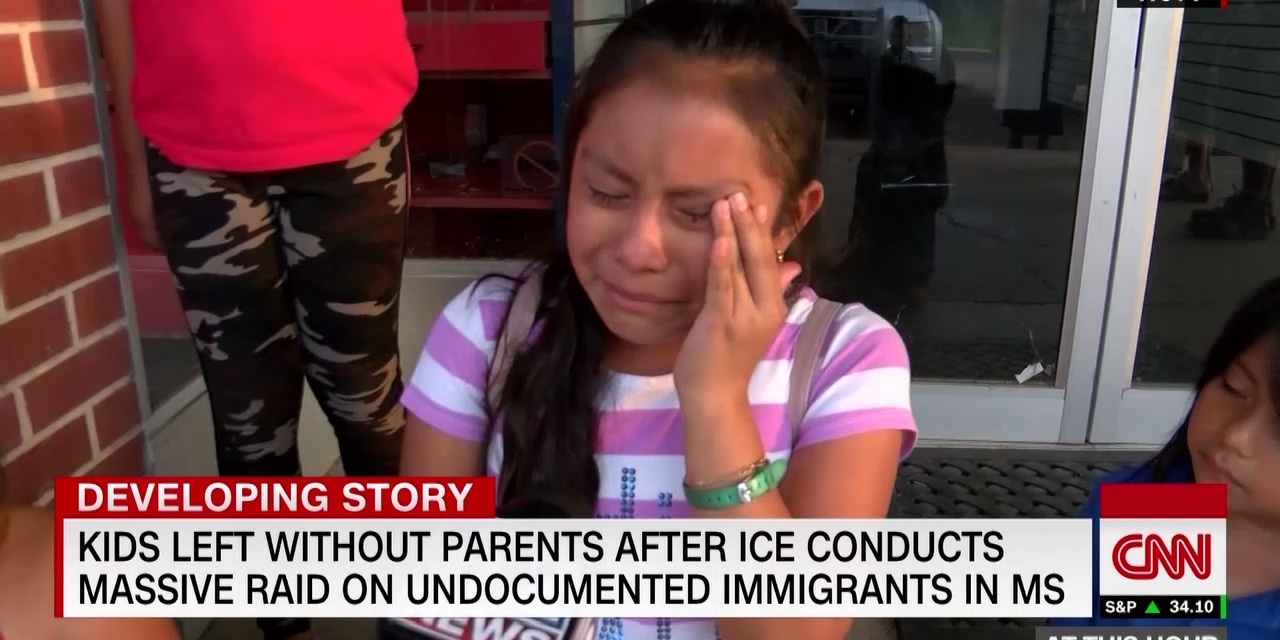 Immigration and Customs Enforcement swept into the plants in the towns of Morton and Forest on Wednesday. Throughout the day and into Thursday, children — suddenly separated from their parents — were kept in a local gym in Forest until neighbors and volunteers gave some of them a place to stay. Residents distributed food and drinks, but most children cried rather than ate.

“I need my dad. He did nothing. He’s not a criminal,” one little girl sobbed to a local TV network.

The gym operator said children were eventually reunited with family members, but in Morton, people waited in a parking lot for news.

Brittany Reynoso said she was there in case members of her church were caught up in the raids:

It’s definitely a ghost town. It is so empty. I’ve never seen Morton or Forest or any of the surrounding areas look so empty during the day. It is horrible. And I honestly don’t think these communities will make it without them. because they really and truly are the backbone of what’s keeping this town afloat.

One of those detained, “Cynthia”, described the raid. The single mother said she hadn’t slept in two days, and her 12-year-old daughter is traumatized after seeing her loaded onto the ICE bus.

Cynthia spoke of an agent telling the people on the bus, “We are going to clean out Mississippi.” She said she was released to the wrong city, almost an hour from her home, overnight.

She said she will not return to work at Koch Foods and ICE officials have kept her ID card. After more than 12 years in the US, she is thinking of returning to Guatemala.

“These Are Our Neighbors”

At least 377 migrants are still detained, a Department of Homeland Security official said.

Jere Miles said 271 were processed and transferred back to arrest locations. Another 32 were released without transport from the processing center.

The status of those released — for example, whether they will be pursued for deportation — is unclear.

Miles claimed 18 juveniles were found working in the plants, one of them 14 years old. The official said nine were processed in a special line.

But the Mississippi Immigrants Rights Alliance emphasized in a news conference:

The men and women taken by the raid are our neighbors. Mississippi did not ask for this raid….

[This has caused a] humanitarian crisis, harming not only the local economy, but also tearing children apart from their parents, spouses from each other, worshipers from their fellow church members and the relationships that make us a community.

Peco Foods, owner of three of the plants, said they adhere to all immigration laws and use the Government’s E-Verify program to screen employees.

PH Foods and Pearl River Foods, the other plant owners, have not yet commented.

In mid-June, Donald Trump announced on Twitter, “Next week ICE will begin the process of removing the millions of illegal aliens who have illicitly found their way into the United States.”

The Administration, with its “zero tolerance” policy, has long sought not only to prevent entry into the US but also to remove undocumented immigrants and to pressure some legal immigrants to depart.

But Trump’s tweet risked operational security. Officials delayed delayed implementation because of concerns over safety of their personnel and the effect on public opinion of more separations of children from parents.

An ICE official was more concerned on Thursday to distance the raids from last Saturday’s mass killing in El Paso targeting Hispanic immigrants.

This was planned for months. Well before El Paso, well before the shootings happened,” the official said. “The dates just happened to be after El Paso. On our end, this was months and months of planning by intel agents, locals. We did this under past presidents. This is business as usual for us.

He tried to quash criticism of the separation of children from mothers and fathers:

I do know it was a concern that came up,” the source said. “We had our community liaison officer to alert school administrators on the day of that it was happening, working with the schools saying students’ parents may be detained.

But he admitted, “The emotion is a horrible thing. I saw kids coming up crying at the gates.”

A woman described the reaction of her 5-year-old son:

The day before yesterday was his first day of school, the day they took [his father], and he asks me for his dad, where he is, and I tell him, “He’s not here.” I told him, “They took him” and he starts to cry because he needs him.

She said her husband, a native of Guatemala, was taken to New Orleans, about 200 miles away from Morton.