The Choice for Rukban’s Besieged: Starve or Risk Detention by Regime 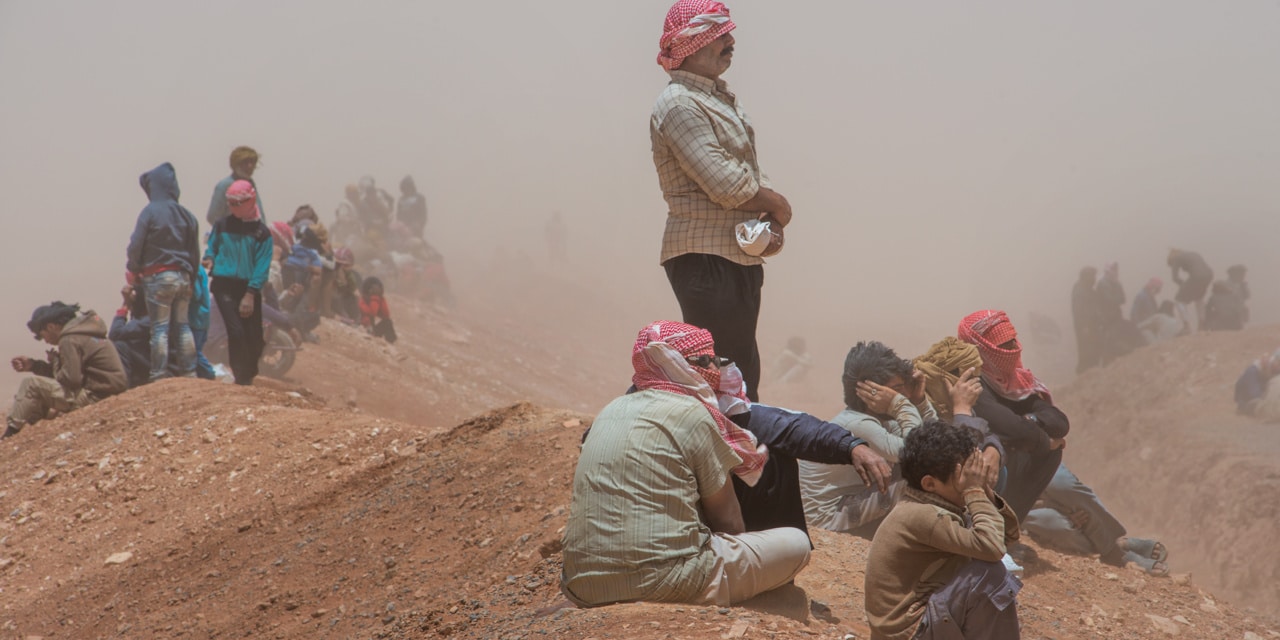 The Rukban camp, in the barren area of southeast Syria near the Jordan border, once held more than 50,000 displaced Syrians.

After months of siege by the Assad regime, backed by Russian military forces and propaganda, the number of residents is between 6,500 and 11,000. Those who remain continue to hold out, despite the threat of starvation and the exhaustion of medicine and other vital supplies, because they fear detention, forced conscription, and harassment if they leave.

“We will stay until the last breath because we fear what awaits us if we return to the regime,” says one resident.

The Syrian Association for Citizen’s Dignity reports on Medium:

In April, the Syrian Association for Citizen’s Dignity published a status report on Rukban, which detailed the tactics employed by the Assad regime and Russia to forcibly return the inhabitants of the camp to Assad-held areas.

We documented the plight of people in the camp who are forced to live under a de facto siege, without basic supplies and amenities, as well as the fate of those who were forced to return and were taken to detention centers where they faced harassment, beatings and in some cases disappearances.

We continue to follow the situation, especially as the siege by Assad and Russian forces intensified, forcing thousands more into choosing detention centers in Assad-held territory over the dire conditions of Rukban. Mouhamad Abuammar personifies thousands still trapped in Rukban, facing this impossible dilemma. In May he told SACD: “I can’t stay here in camp with my children and wife without food and water in this weather. I am seriously considering going to regime areas. Many families I know did that.”

When we checked this week, Abuammar and his family were still in Rukban. He repeated that he is thinking about going due to harsh living conditions, but he is scared as many of his friends and relatives who returned are still detained in “refugee shelters” and aren’t allowed to go out. He is deeply worried what would happen to himself and his family if they were to be detained in these “shelters” like the others he knows.

Through its contacts, SACD established that there are numerous families that came from Rukban held in “refugee shelters” in the Homs area, who are kept in detention because they are wanted by various security branches from Damascus and Homs. Sami (28 years, from Palmyra) and his three children, are detained in one of these shelters since March, when he signed all the papers that were requested from him. He found a local “sponsor” who provided a guarantee, but despite repeated requests he was not allowed to leave the shelter.

Even if they make it out of the “shelters,” this is not a guarantee that Rukban returnees will be allowed to go back to the areas where their homes are. Nashwan (45, from Damascus) and his family have been forced to stay in the Maskana area of Southern of Homs since May. Despite signing the settlement papers and submitting repeated, he was not allowed to leave the area to which he was taken from the shelter.

However, arbitrary arrest and disappearance account for the worst fate met by some of those forced to return from Rukban. Hamza (38) a car mechanic from Qareteen, decided to leave Rukban in May as he had no way to feed the family of a wife and three small children. When he arrived in one of the “shelters” in Homs, he was immediately arrested and taken away by the security forces. His wife has attempted numerous times to find out where he was taken and why, but since May she was unable to find out anything about his fate.

Examples like this clearly illustrate that the people forced to return from Rukban are not safe once they cross into Assad-held areas. Cases such as those of Hamza and others who have been arrested and taken to unknown locations by Assad’s security, despite all the guarantees given by the regime and Russia, testify that the minimum protection thresholds for returnees, defined by the UNHCR as “safe and voluntary return” are not being respected when it comes to people from Rukban.

Returns from Rukban are by no means voluntary or informed, but the result of dire shortage of basic supplies and harsh living conditions, especially for families with children. The cases of Sami and Nashwan, who represent hundreds of families who have been in detention for months after being taken to “refugee shelters,” best testify to this, as no person in their right mind would chose detention and fear as return options.

The pleas of refugees from Rukban to be taken to safe locations in north Syria or elsewhere, instead of being taken to Assad-held areas, fall on the deaf ears of the international community. But the information about the fate of those who were forced to return so far, gathered by SACD and others, ensures that they cannot say they did not know.