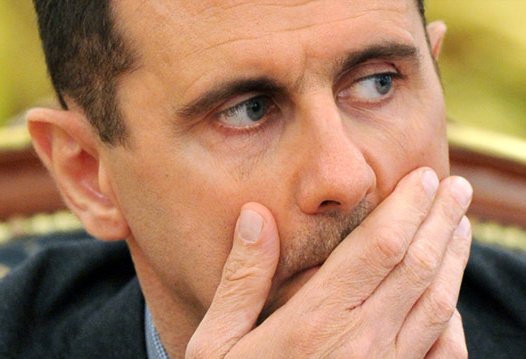 Frustrated in a three-month offensive in northwest Syria, the Assad regime has offered a “ceasefire” if anti-Assad forces pull back across Idlib and northern Hama Provinces.

Regime media, citing a military source, said on Thursday that attacks will be halted if the anti-Assad fighters withdraw 20 km (12 miles) and take all heavy weapons from a demilitarized zone declared last September by Russia and Turkey.

The May 6 offensive by the Assad military, supported by Russian airstrikes and ground advisors, shattered the 15-km (9-mile) deep, 100-km (62-mile) long zone around the last major opposition area in Syria.

The offensive initially seized several towns and villages in northwest Hama Province, but was then checked by rebels and the Islamist bloc of Hay’at Tahrir al-Sham. The anti-Assad forces regained some of the territory in June, and continued raids that seized weapons and inflicted casualties.

Despite repeated attempts and Russian airstrikes, the regime forces could not advance further until they took the hilltop of Tal Maleh, overlooking a road connecting two regime-held villages, earlier this week.

Meanwhile, Russian-regime attacks killed more than 700 civilians and wounded more than 2,200 people since late April. At least 330,000 of Idlib and northern Hama Province’s 3 million population — about 20% of those remaining in Syria — have been displaced. More than 30 medical facilities and at least 34 civil defense positions and vehicles were struck.

On Tuesday, the head of the UN’s humanitarian agency, Mark Lowcock, cited “a level of destruction consistent with a bombing campaign aimed at a scorched-earth policy”. Last Friday, the UN’s human rights head Michelle Bachelet detailed the “war crimes” of the assaults on markets, hospitals, bakeries, and other sites, and criticized the “failure of leadership by the world’s most powerful nations” with their “collective shrug”.

Even as the regime was issuing its announcement, four civilians were killed by Russian-regime bombardment across Idlib and northern Hama:

3- A new truce is being spoken about by the parties to the conflict, including the Russians, who were the first participants in the killing of civilians. Sadly, theirs words have proven in the past to be as dishonourable as their evil actions. pic.twitter.com/SkJIvrlNdL

Russia’s special envoy for Russia Alexander Lavrentyev welcomed the regime announcement but tried to pin blame on anti-Assad forces: “According to our estimates, 90% of the territory remains under the control of terrorist organization Hay’at Tahrir al-Sham (formerly known as Jabhat al-Nusra, outlawed in Russia – TASS) and those affiliated with it.”

Rebels made no official comment, but local sources told EA that the anti-Assad units were unlikely to pull back 20 km.

And Maj. Gen. Hassan Hassan, head of the Syrian Army’s political bureau, indicated that the regime announcement was no more than a public relations tactic.

Hassan told the pro-regime al-Watan newspaper that he hoped Russia or Iran could find a solution through talks with Turkey, which supports the rebel National Liberation Front and has had forces in the northwest since August 2016.

The military path to eliminate terrorism in the north is ongoing….When matters reach a dead end, then the Syria Arab Army which cleansed all these vast areas…will not stop at all, neither at Idlib nor at any area.

Bashar al-Assad and his officials have long asserted that they would retake “every inch” of Syrian territory.

The opposition captured almost all of Idlib Province in spring 2015, putting the regime at a breaking point until a Russian military intervention that September.