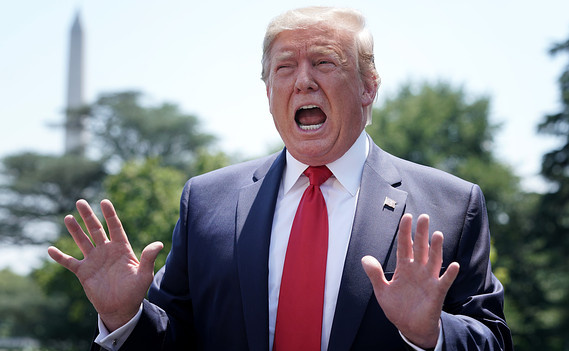 Expanding his trade war with China, Donald Trump announces tariffs on all Chinese products entering the US.

Trump launched the tariffs last year on $250 billion of Chinese goods, and raised the duty from 10% to 25% in May, scuttling trade talks.

Frustrated that the Chinese will not accept his Administration’s terms, he announced on Twitter on Thursday that the remaining $325 billion of Chinese products will face a 10% tariff from September.

…during the talks the U.S. will start, on September 1st, putting a small additional Tariff of 10% on the remaining 300 Billion Dollars of goods and products coming from China into our Country. This does not include the 250 Billion Dollars already Tariffed at 25%…

The additional tariffs will affect products such as smartphones, including Apple iPhones, sneakers, bicycles, and children’s books and toys.

Trump had agreed in June not to impose more tariffs after he met Chinese President Xi Jinping at the G20 summit in Japan, and the trade talks resumed.

But Trump declared on Thursday, after a US delegation returned from discussions in Shanghai, that China had reneged on a promise to import more US agricultural goods — a claim that he loudly made on Twitter in the spring as a sign of “victory”. He blamed Beijing for the American opioid crisis: “My friend President Xi said that he would stop the sale of Fentanyl to the United States – this never happened, and many Americans continue to die!”

He told reporters, “President Xi said he wanted to make a deal but he isn’t moving fast enough….Until such time as there is a deal, we’ll be taxing them.”

Trump said the new tariffs can be raised to 25% or higher.

China has responded to past Trump tariffs with duties on $110 billion of US products, more than 90% of the goods imported each years. Beijing did not announce an immediate response, but Foreign Minister Wang Yi said in Thailand on Friday, “Adding tariffs is definitely not the correct way to resolve economic and trade frictions.”

The next trade talks had been scheduled for September in Washington.

Campaigning for re-election, Trump is gambling that the tariffs do not cause significant economic damage. But US manufacturers, consumers’ associations, and farmers have said that they are suffering from higher import costs and loss of the Chinese market.

On Wednesday, Federal Reserve chairman Jerome Powell announced the first interest rate cut in 11 years because of an anticipated slowdown in the US and global economy. He implicitly cited the impact of Trump’s approach: “Trade-policy tensions nearly boiled over in May and June but now appear to have returned to a simmer.”

Economists estimated this spring that Trump’s tariffs and Chinese retaliation will cost the US economy $1.3 trillion. The White House’s chief economic advisor Larry Kudlow, contradicting Trump, said, “Both sides will pay. Both sides will suffer on this.”

The agricultural sector has been significantly affected, with almost all American soybean exports wiped out. Last week the Administration gave details of a $16 billion bailout for US farmers, but analysts and advocacy groups said the bulk of the payments will go to the wealthiest agricultural concerns rather than smaller farms at risk of closure.