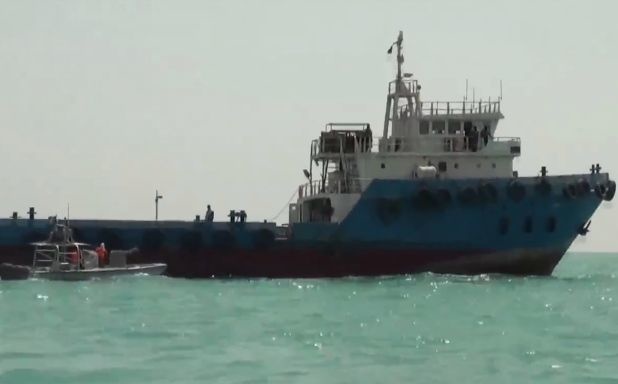 An image from Iran State TV of Revolutionary Guards’ interception of a small oil tanker on July 31, 2019

On Sunday, the Guards said that they intercepted the tanker and its seven crew near the Persian Gulf island of Farsi, north of the Strait of Hormuz, on Wednesday night. Commander Ramezan Zirahi said, “The boats of the IRGC navy were patrolling the area to control traffic and detect illicit trade when they seized the tanker.”

The ship was taken to the southern Iran port of Bushehr and its fuel off-loaded.

Officials later claimed that the vessel was Iraqi and was carrying under 5,000 barrels (700,000 liters) of diesel. Iraq’s Oil Ministry said it had no connection with the tanker: “[We do] not export diesel to the international market.”

Two Iraqi port officials said the vessel is a “small ship” owned by a private company.

The Guards also detained the UAE-based, Panama-flagged tanker Riah on July 14, asserting that it was smuggling about 1 million liters of oil.

On July 19, the military force boarded the UK-flagged, Swedish-owned Stena Impero in the Strait of Hormuz, taking it to Bushehr. The interception followed the Supreme Leader’s declaration that Iran would retaliate for “UK piracy” — Britain’s impoundment of an Iranian supertanker, suspected of taking oil to Syria’s Assad regime, off the coast of Gibraltar on July 4.

Foreign Minister Mohammad Javad Zarif said on Monday that Iran will no longer tolerate “maritime offenses” in the Persian Gulf and the Strait of Hormuz: “Iran used to forgo some maritime offenses in…[the] Gulf but will never close [its] eyes anymore.”

He linked London to comprehensive US sanctions against the Islamic Republic: “[The] UK Government has been complicit in the US economic terrorism against Iran.”

About 1/5th of the world’s oil passes through the Strait.