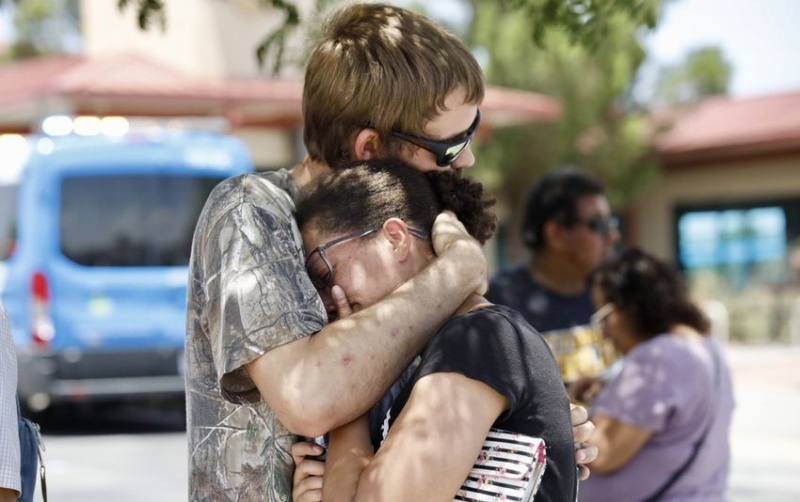 Facing criticism over his language of animosity towards immigrants and people of color, Donald Trump says little of substance about the weekend’s mass killings in Texas and Ohio.

A gunman opened fire with multiple weapons in a shopping mall near El Paso on Saturday afternoon, killing 20 people and injuring 26. Just after 1 am on Sunday, an assailant with a semi-automatic weapons killed nine people and wounded 27 outside a bar in Dayton.

The captured suspect in the El Paso killings, Patrick Crusius, posted a “manifesto” just before his attack. He said he was acting to stop immigrants replacing whites in America, and — paralleling Trump’s language — said the immigrants should “return to their countries”.

Analysts noted not only Trump’s recent remarks telling four Democratic Congresswomen of color — three of whom were born in the US; the fourth an American citizen after leaving war-torn Somalia at the age of 12 — to “go back to their countries”, but also his labelling of migrants as animals, rapists, and criminals.

A video circulated of a Trump rally in May where, in response to his declaration of an “invasion” and question “How do we stop these people?”, a supporter shouts, “Shoot them.”

Trump smiles and responds, “That’s only in the [Florida] Panhandle you can get away with that stuff.”

But he was uncharacteristically quiet on Twitter throughout Sunday, with his only message — or one from his staff in his name — saying flags will be lowered at the White House through Thursday.

On Sunday afternoon Trump, flanked by wife Melania, faced the press as they left New Jersey. He stuck to general remarks about the “incredible people” of El Paso and Dayton and praise for law enforcement.

Finally, in lines trying to knock back criticism, he said, “Hate has no place in our country. We’re going to take care of it.”

However, Trump did not utter a word about gun control nor Crusius’s statements about immigrants.

Pressed on what he will do about the “gun problem”, Trump replied, “We’re talking to a lot of people. A lot of things are in the works. We have done much more than most Administrations….We’ve done actually a lot.”

Trump did not give a single example of what had been done in his 30 months in office, instead shifting to blame of “people who are seriously mentally ill”.

Trump said a further statement will be made Monday morning.

Language as “Crack Cocaine” for Killers

Experts noted the links between inflammatory rhetoric by politicians and the mass killings. Nathan Kalmoe of Louisiana State University, an analyst of hate speech, summarized:

The people who carry out these attacks are already violent and hateful people. But top political leaders and partisan media figures encourage extremism when they endorse white supremacist ideas and play with violent language. Having the most powerful person on Earth echo their hateful views may even give extremists a sense of impunity.

Democratic Presidential candidate Beto O’Rourke, who represented El Paso in Congress, declared bluntly on Sunday TV, “I’m saying that President Trump has a lot to do with what happened…yesterday….[He] sows the kind of fear, the kind of reaction that we saw in El Paso.”

But David Livingstone Smith of the University of New England, who writes about dehumanization of categories of people, explained:

This has always been part of American life. But Trump has given people permission to say what they think. And that’s crack cocaine. That’s powerful. When someone allows you to be authentic, that’s a very, very potent thing. People have come out of the shadows.