TrumpWatch, Day 911: Responding to Trump — “What Makes Us Great is Our Diversity” 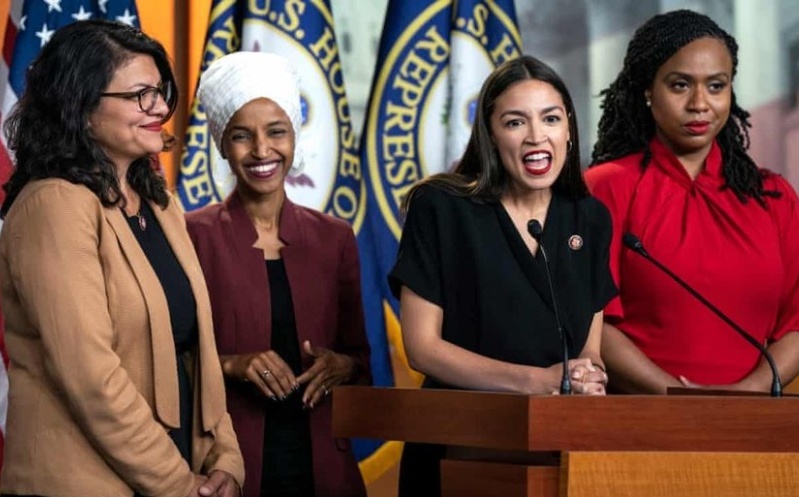 Implicitly responding to Donald Trump’s racist attacks on four Democratic Congresswomen, Michelle Obama calls for a celebration of “our America”.

What truly makes our country great is its diversity. I’ve seen that beauty in so many ways over the years. Whether we are born here or seek refuge here, there’s a place for us all. We must remember it’s not my America or your America. It’s our America.

Obama’s message was a refrain of her 2016 call for decency, “When they go low, we go high.” It amplified the words of the four Congresswomen — Reps. Alexandra Ocasio-Cortez of New York, Rashida Tlaib of Michigan, Ilhan Omar of Minnesota, and Ayanna Pressley of Massachusetts — after Trump, campaigning for re-election 2020, launched his assault on Sunday night by telling the legislators to “go back…to your country”.

The quartet responded on Monday by elevating the issues on which they are campaigning, such as the environment, immigration, education, health care, and economic justice. Omar summarized, “I know that we’re focused on making [America] better. Because we don’t leave the things that we love — and when we love this country, we propose the solutions to fix it.”

See also EA on BBC, RFI, and talkRADIO: Trump’s Racist Tweets — and How to Respond

Pressley featured a higher national minimum wage — adopted by the House earlier this week — in a Friday retweet, and Ocasio-Cortez linked the environment, economy, and infrastruture in promotion of the Green New Deal:

This is what the climate crisis is doing, and will do, to American infrastructure.

This is why we need a #GreenNewDeal that invests in a solution on the scale of the problem – and can help our nation transition, adjust, and prevent further damage in the climate crisis. https://t.co/4LjwWtJjD6

She stood firm in another message:

The GOP wants to send us back:

But we won’t go back.
We will move forward.

Forward to the dignity of all people & protection of our planet. https://t.co/GaN2n7C7PF

I fight to keep the promise our country represents that is based on love for humanity. I won't be silenced in fighting for the America that allowed my mother (who only has 8th grade edu & poor when she got here) to see her daughter achieve what she thought was impossible. #Onward https://t.co/boiatwsv77

And Omar, who was given a heroine’s welcome when she returned to Minnesota on Thursday for a Town Hall meeting, reiterated her message:

Together we are fighting for a vision of America where its promise is alive for all who seek it. https://t.co/RrBlpIxsFN

Meanwhile, Trump tried to renew his attack after he was forced on Thursday, because of concern from GOP legislators, to retreat over his supporters’ chant of “Send Her Back” at his North Carolina rally the previous night.

Asked by reporters to repeat the disavowal of the crowd, including his lie that he tried to cut off the derogatory chant, Trump repeated insulting falsehoods about the Congresswomen:

Trump said the North Carolina crowd were “incredible patriots” and bristled at Omar’s challenge that the American people will end the Trumpian “nightmare”: “[She is] lucky to be where she is.”

Later in the day, as he left for the weekend at his New Jersey golf club, Trump again declined to repeat the disavowal, persisting with the lies about his opponents:

ou know what’s racist to me, when someone goes out and says the horrible things about our country. The people of our country that are anti-Semitic, that hate everybody, that speak with scorn and hate — that to me is really a dangerous thing.