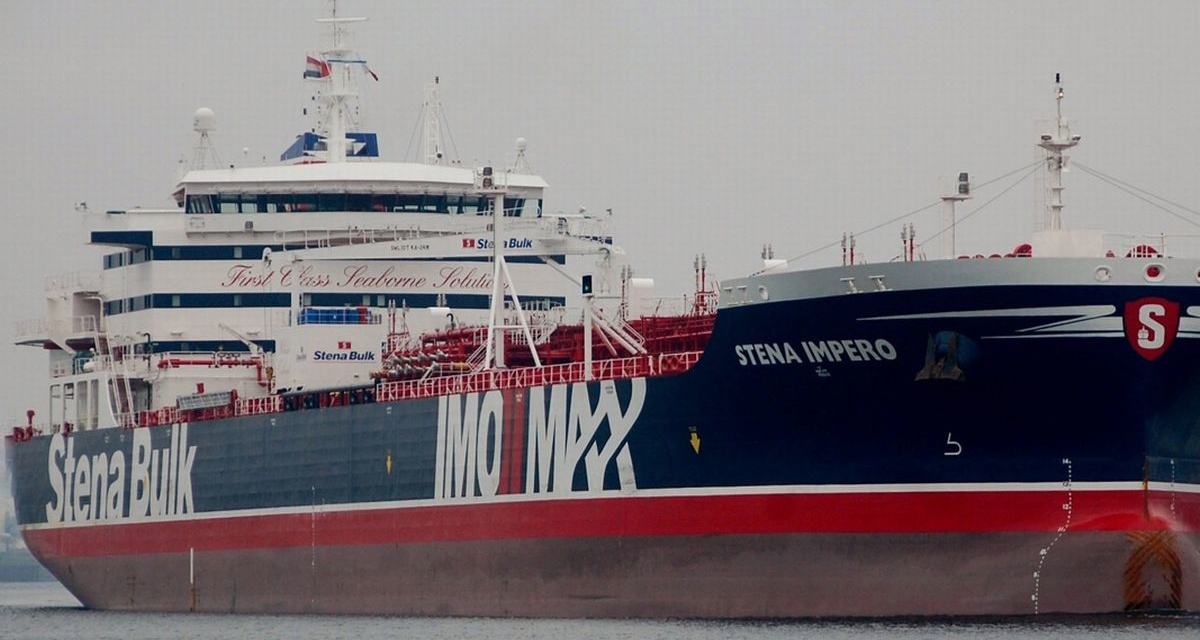 Iran’s Revolutionary Guards seized a UK oil tanker on Friday in the Strait of Hormuz, through which 1/6th of the world’s oil passes.

There are conflicting reports about the situation of a second tanker, which was at least briefly held by Iran’s elite military force.

The Guards initially declared that the Stena Impero was being held “at the request of Hormozgan Ports and Maritime Organization when passing through the Strait of Hormuz, for failing to respect international maritime rules”. They said the tanker had “violated three international naval regulations“, including turning off a GPS locator, breaking the traffic pattern in the Strait of Hormuz, and polluting the water by dumping crude oil residue.

Iranian officials revised their justification as the vessel was taken to the port of Bandar Abbas in Hormozgan Province in southern Iran.

The general director of the Ports and Maritime Organization later said that the tanker was in an accident with a fishing boat, claiming that the boat had attempted to signal to the Stena Impero but was ignored.

The owner of the Stena Impero said it was “approached” about 4 pm “by unidentified small crafts and a helicopter during transit of the Strait of Hormuz while the vessel was in international waters”.

The company said none of the 23 crew were injured. Iranian authorities said they will be held while an investigation into the alleged accident is conducted.

See also EA on Radio Islam: An Iran-UK Showdown in Strait of Hormuz?

Soon after confirmation of the Stena Impero’s detention, maritime trackers said a second tanker, the Liberian-flagged MV Mesdar, had slowed and then turned sharply toward Iran.

Iranian media reported that the tanker was also being seized. The Revolutionary Guards subsequently claimed that the vessel was briefly intercepted but was released after a warning that it was violating environmental regulations.

UK Foreign Secretary Jeremy Hunt said he was “extremely concerned” about the reports and would convene a meeting of the Cabinet’s Cobra committee.

He said there were no UK citizens aboard either tanker and added:

Our ambassador in Tehran is in contact with the Iranian Ministry of Foreign Affairs to resolve the situation and we are working closely with international partners.

These seizures are unacceptable. It is essential that freedom of navigation is maintained and that all ships can move safely and freely in the region.

Hunt summarized, “We’re not looking at military options; we’re looking at a diplomatic way to resolve the situation. But we are very clear that it must be resolved.”

The US Government, which has imposed comprehensive sanctions on Tehran and has been in an escalating conflict with Iran in the Persian Gulf, expressed solidarity with London.

While Iran’s official story is now that the Stena Impero collided with a fishing boat, its military commanders and officials vowed retaliation for the UK’s seizure of an Iranian supertanker in Gibraltar’s waters on July 4.

On Monday, the Supreme Leader promised:

The vicious British government committed piracy and attacked our ship; they commit crimes and legalize it. The Islamic Republic and the believing members of the establishment will not leave such vicious acts without a response.

The Grace 1, carrying 2.1 million barrels of oil, was intercepted at the mouth of the Mediterranean, having taken the long route around the southern tip of Africa. The UK said the supertanker was breaking European Union sanctions on oil deliveries to Syria’s Assad regime. The Revolutionary Guards denied the vessel was en route to the port of Baniyas in western Syria.

The Guards denied that they were trying to seize the British Heritage, owned by the oil company BP, but commander Adm. Ali Fadavi said the UK and US would soon “seriously regret” the impoundment of the Iranian supertanker.

On Thursday, Iran confirmed that it had taken a tanker in the Strait of Hormuz, claiming it was smuggling one million liters of oil out of the Islamic Republic. Authorities did not name the vessel, but Iranian State TV showed speedboats surrounding the Panama-flagged, UAE-based Riah last weekend.

Iranian officials initially said that they had rescued a disabled tanker and towed it to port.