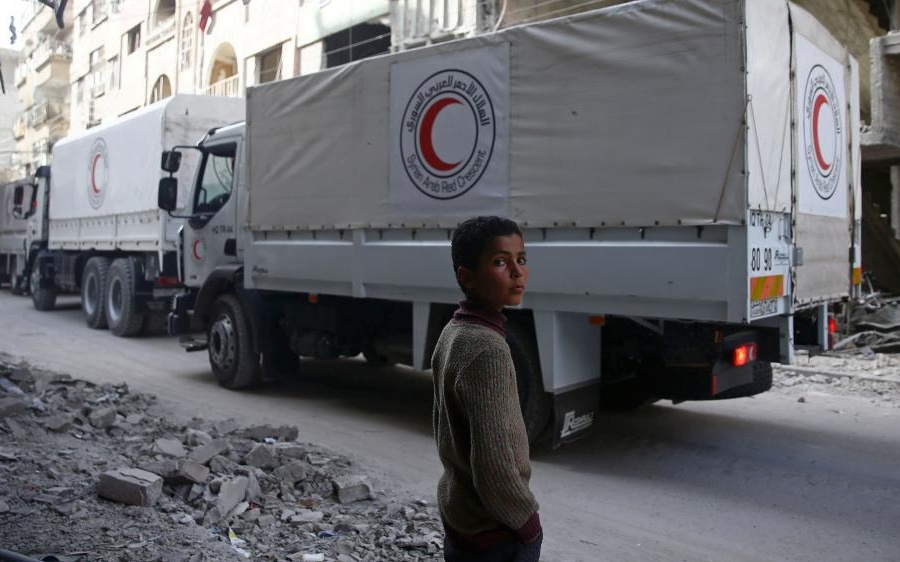 A senior UN official has defended cooperation with Syria’s Assad regime over the provision of humanitarian aid, despite the large majority going to regime-held areas, access being denied to those in opposition territory, and reports of widespread corruption and sanctions-busting.

Amin Awad, director of the Middle East and North Africa bureau at the UN High Commissioner for Refugees, maintained in an interview with The National:

I reject the argument that the UN is working with cronies of one regime or another.

For us it is secondary who is who. I do not have a mechanism where we comb every single contract to see do you have one, 10 or 90% connection with the regime or not. We have to be realistic.

For years, aid agencies, humanitarian staff, and medics have expressed concern about the UN’s relationship with the regime despite its alleged war crimes against civilians, including protracted sieges to force surrenders, and money going to Assad’s inner circle.

The Foreign Ministry has required all humanitarian agencies to work with the regime’s official partner, the Syrian Arab Red Crescent, prohibiting field visits and programming without the Red Crescent’s permission.

To force capitulation of areas such as east Aleppo city, Damascus suburbs, and the East Ghouta area, the regime repeatedly denied permission for aid convoys. The practice continues: only two deliveries have been allowed since January 2018 to the Rukban camp in the barren area near Jordan, where there were more than 50,000 displaced Syrians.

Even when access was approved, supplies were removed or stolen by regime forces. In 2017, medical equipment, drugs, and hygiene kits were seized from 54 of the 55 UN-led convoys that were allowed.

In 2016, 73 aid groups have suspended cooperation with the UN in Syria, after revelations that the regime had gained “significant and substantial” influence over the relief effort.
Contracts worth tens of millions of dollars were given to Assad’s wife Asma; his cousin, the tycoon Rami Makhlouf; and other businessmen whose companies are under US and European Union sanctions.

To ensure that some aid could get to opposition territory, the UN and other international agencies have set up offices in Turkey and Jordan. However, the UN continued to run most of its operations out of Damascus, and this spring the Office for the Coordination of Humanitarian Affairs proposed shifting all Jordan-based programs to the Syrian capital.

The OCHA has even sanitized language in its reports to avoid offense to the regime, using “conflict” instead of “crisis” after objections by Damascus.

Awad would not say how much the UN’s refugee agency UNHCR spends in regime areas, claiming that the contracts covering “rehabilitation” projects such as sanitation and schools are subject “to very fair, transparent bidding procedures as prescribed by the UN in New York”.

But an analysis by the Syria Report, an economic and business newsletter, showed that the UN provided $1 billion in aid to areas controlled by regime in 2018. That was an amount equivalent to 25% of the regime’s total budget of $4 billion.

Sources say the regime and its allies revised their business models for UN aid and rebuilding projects, setting up new corporate structures and shell companies.

One of the new firms is Ramak for Humanitarian and Development Projects, owned by Assad’s sanctioned billionaire cousin Makhlouf.

But Awad indicated that the UN was taking no measures to scrutinize recipients for corruption and violations of international sanctions.

If there are business people who have been there for a long time, whether they are part of a regime or not, you cannot keep combing who is who. You are in a country and you have to deliver.

For us, it is secondary who is who.