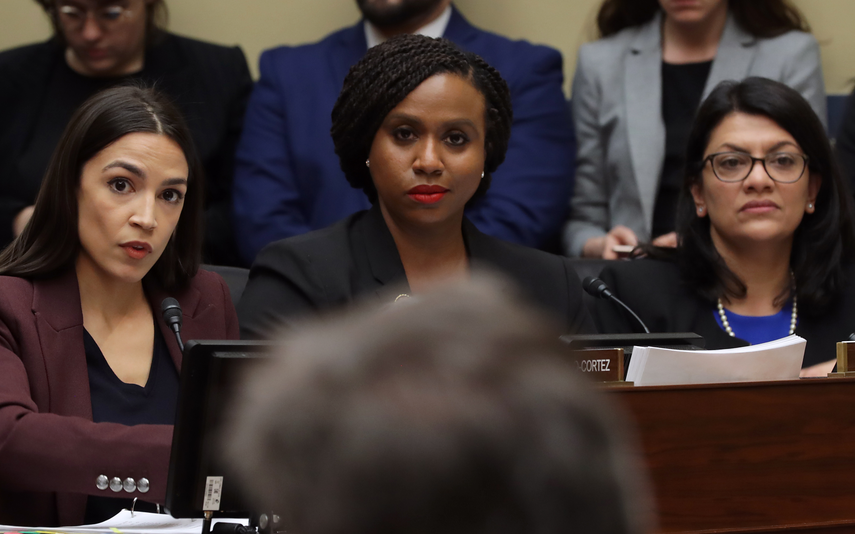 Stepping up his tactic of confrontation for re-election, Donald Trump fires a series of racist tweets at Democratic Congresswomen.

So interesting to see “Progressive” Democrat Congresswomen, who originally came from countries whose governments are a complete and total catastrophe, the worst, most corrupt and inept anywhere in the world (if they even have a functioning government at all), now loudly……

….it is done. These places need your help badly, you can’t leave fast enough. I’m sure that Nancy Pelosi would be very happy to quickly work out free travel arrangements!

Trump did not name the Congresswomen, but observers linked the tweet to four first-term representatives who have made an impact with their progressive policies and calls for actions on issues such as immigration, the environment, health care, and economic justice.

Rep. Ilhan Omar of Minnesota was born in war-torn Mogadishu, Somalia, who came to the US at age 12 with her family. Rep. Alexandra Ocasio Cortez of New York is of Puerto Rican descent. Rep. Rashida Tlaib of Michigan — who, with Omar, are the first female Muslim representatives in US history — is the daughter of Palestinian immigrants. Rep. Alyanna Pressley of Massachusetts grew up in Chicago.

Trump’s advisors are hoping, in the 2020 campaign, to portray the Congresswomen as key members of an “extremist” and “radical” faction which has taken over the Democratic Party. Their effort has been fueled this month by tensions between House Speaker Nancy Pelosi and the group, over how to respond to the Administration’s mass detention of migrants in inhumane conditions.

But the tweets could backfire by highlight Trump’s record on issues of race and religion. He has derided migrants from Central America as “animals”, excused — and some claim supported — white extremists over their violent in Virginia in 2017, labeled Caribbean and African countries as “shitholes”, insulted the Muslim parents of a Gold Star Marine killed in Iraq, and criticized a judge from Indiana as a “Mexican”.

“We’ve Got Things to Do”

The progressive Congresswomen each highlighted Trump’s “white nationalism” while focusing on their policies of inclusion.

You know what we’re going to do tomorrow?

Same thing we do every week. Fight for:
✅ Living wages & unions
✅ A humane border
✅ Healthcare + edu as rights
✅ Loosening the grip of corp lobbyists on our democracy

They can stay busy defending racism.

We’ve got things to do.

THIS is what racism looks like. WE are what democracy looks like. And we’re not going anywhere. Except back to DC to fight for the families you marginalize and vilify everyday. pic.twitter.com/vYzoxCgN0X

As Members of Congress, the only country we swear an oath to is the United States.

Which is why we are fighting to protect it from the worst, most corrupt and inept president we have ever seen. https://t.co/FBygHa2QTt

Want a response to a lawless & complete failure of a President?

Ocasio-Cortez cut to the heart of the matter with this message to Trump: “On top of not accepting an America that elected us, you cannot accept that we don’t fear you, either. You can’t accept that we will call your bluff & offer a positive vision for this country. And that’s what makes you seethe.”

Other Democrats rallied around the Congresswomen. Significantly, Pelosi was among the first to respond:

When @realDonaldTrump tells four American Congresswomen to go back to their countries, he reaffirms his plan to “Make America Great Again” has always been about making America white again.

Our diversity is our strength and our unity is our power. https://t.co/ODqqHneyES

She then highlighted a common line on Trump’s anti-immigrant “zero tolerance” policy:

I reject @realDonaldTrump’s xenophobic comments meant to divide our nation. Rather than attack Members of Congress, he should work with us for humane immigration policy that reflects American values. Stop the raids.

Many Americans responded on social media that they had been the targets of versions of Trump’s taunt, starting at school and the playground. Among them was Senator and Presidential candidate Cory Booker: “We’ve heard this our whole lives. Now we hear it from the Oval Office.”

Growing up I used to hear “go back to Mexico” from many kids, though I was born in the USA. I thought then that it was just kids. https://t.co/BguGAwQP0S

The White House and a spokesman for Senate Majority Leader Mitch McConnell declined to comment. The staff of Republican House leaders did not respond to e-mails.

Meanwhile, Trump pressed ahead with his dehumanizing remarks about migrants. He tried to counter revelations of the inhumane conditions in which they are being held in detention centers, falsely claiming a “big percentage are criminals”.

…..Sorry, can’t let them into our Country. If too crowded, tell them not to come to USA, and tell the Dems to fix the Loopholes – Problem Solved!

Immigration and Customs Enforcement agents were scheduled on Sunday to begin raids on undocumented immigrants in 10 cities, carrying out Trump’s order to deport “millions” of “illegal aliens”.

And he closed the day with another electioneering tweets, doubling down on his taunt:

Their disgusting language and the many terrible things they say about the United States must not be allowed to go unchallenged.