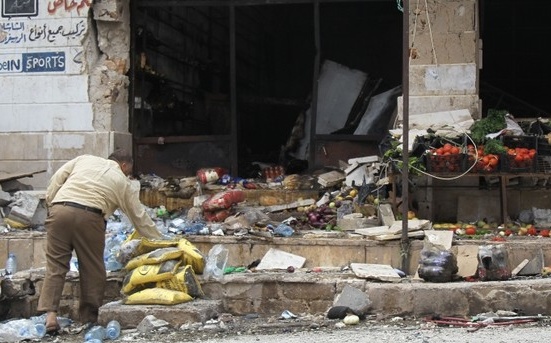 The latest Assad regime bombing of a market in northwest Syria has killed at least 12 people and injured scores.

#Syria: aftermath of airstrike on MaarShoreen. Only today dozens of people were killed & wounded during raids carried out on Greater #Idlib. GRAPHIC. pic.twitter.com/Mg1yAcTKQn

12 civilian were killed and more than 10 were injured by regime airstrikes on #Maar_Shoreen in the southern countryside of Idlib.
Hadi Abdullah reported from #Maar_Shoreen. pic.twitter.com/TBSMpGa6PC

Russian-regime attacks have killed at least 600 civilians, including 157 children, in Idlib since late April. More than 2,100 people have been injured, and at least 330,000 of Idlib and northern Hama’s 3 million population — about 20% of those remaining in Syria — have been displaced.

Many of the bombings have been on markets where people congregate. Others have been on medical facilities, with 34 struck, and on 31 civil defense centers and vehicles.

Last Friday, as Bashar al-Assad met Russian officials in Damascus, regime bombardment killed 11 civilians, most of them children, and wounded 45 in coordinated attacks across Idlib.

Despite the assault on civilians, the offensive has been unable to break resistance. Enabled by Russian airstrikes and advisors on the ground, Assad forces quickly took several towns and villages in northwest Hama but have been checked by Turkish-backed rebels and the Islamist bloc Hay’at Tahrir al-Sham.