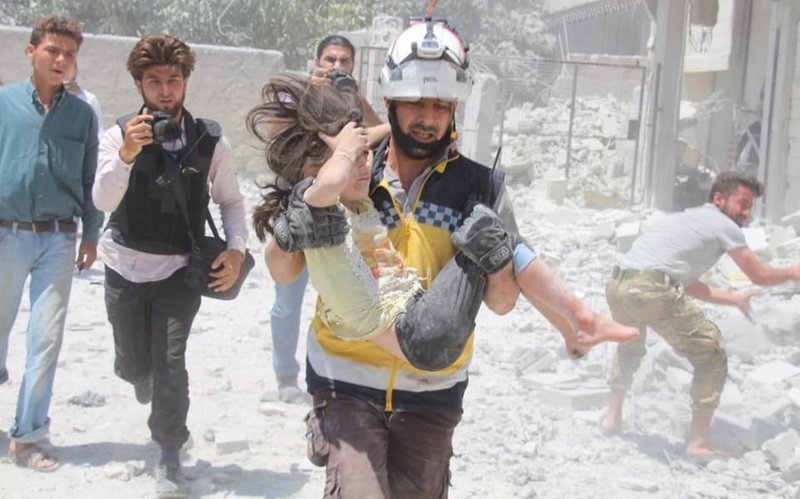 A White Helmets rescuer carries a girl away from the scene of a pro-Assad airstrike, Ariha, Idlib Province, July 24, 2019

Pro-Assad forces have carried out another mass killing in Idlib Province in northwest Syria, with at least 16 civilians slain in the latest bombing.

White Helmets rescuers reported at least 10 fatalities in Tubish village, near the “ghost town” of Khan Sheikhoun in the south of Idlib.

2- 10 victims have been retrieved by #Whitehelmets until now, and 10 injured civilians were rescued, after their homes collapsed due to repeated airstrikes, resulting in destruction to more than 15 houses. pic.twitter.com/0qTlt0EDHL

The search for victims under the rubble continued throughout Wednesday.

Three women were killed in the town of Mohambel, and casualties were also reported in Ariha.

Ariha #Idlib this morning. As you can see this is a civilian neighirhood and women and children are the main victims of Russian backed regime attacks. This has been going on for at weeks now as the world remains silent to such abhorrent attacks #SaveIdlib #Syria @ObaidaHitto pic.twitter.com/tWvh2mrmQi

About 100 civilians have been slain in the past week, as Russia and the Assad regime step up attacks amid their frustration over a stalled offensive in neighboring northern Hama Province.

On Monday, as the Pope’s envoy met Bashar al-Assad in Damascus, the pro-Assad bombardment killed at least 59 people and wounded more than 100.

The latest assault has concentrated on towns and villages along the M5 highway from Aleppo to Homs. Khan Sheikhoun, the target of an April 2017 sarin attack, has been reduced to a “ghost town” with almost all residents — many of them having been displaced from other parts of Syria — fleeing once again, closer to the Turkish border.

Since late April, the Russian-regime attacks — shattering a demilitarized zone declared by Russia and Turkey last September — have killed about 700 civilians, including more than 150 children. More than 2,200 people have been injured, and at least 330,000 of Idlib and northern Hama’s 3 million population — about 20% of those remaining in Syria — have been displaced.

The situation is so inhumane. Russia is testing its weapons on human beings and bombing their houses and shelters. How many times can you carry injured or dead children?
We are no robots, we have emotions and our hearts can't take anymore. pic.twitter.com/IFbOXiIXAM

The Russian-regime offensive, to retake part of the last major opposition area in Syria, began on May 6. It took several towns and villages in the first two weeks, but was then checked by Turkish-backed rebels of the National Liberation Front and by the Islamist bloc Hay’at Tahrir al-Sham. Anti-Assad counter-attacks regained territory in June, and the pro-Assad forces have been unable to advance since then, instead facing raids seizing weapons and inflicting casualties.