UN officials based in Turkey have updated the casualties from Monday’s pro-Assad bombing and shelling.

Mark Curtis, the Deputy Regional Coordinator for Syria, said at least 59 people were killed and more than 100 injured.

At least 39, including eight women and five children, were slain in the attack on the market in Ma’arat al-Nu’man. The toll is expected to rise as bodies are retrieved from rubble.

“Some of the bodies were torn into pieces or burnt beyond recognition,” Curtis said in his statement.

A rescuer and a hospital employee are among the victims.

Curtis insisted, “These people must be protected. The world must not turn its back on them.” However, he offered no measures beyond calling on all parties to adhere to obligations under international law.

At least 38 people were killed and 50 wounded by pro-Assad bombing of Idlib Province in northwest Syria.

On the fourth straight day of intense bombardment across the opposition area, 32 were slain in attacks struck a market in the town of Ma’arat al-Nu’man, south of Idlib and on the M5 highway between Aleppo and Homs.

“Bodies are lying on the streets. May God take revenge on [Russian President Vladimir] Putin and [Bashar al-Assad] for their crimes,” said Abdul Rahman al-Yasser, a White Helmets rescuer as he searched for bodies under the rubble.

The White Helmets said Russian warplanes carried out four raids, including their characteristic “double tap” bombing in which a second attack targets those responding to the initial bombing. The civil defense organization provided details, including exact times of takeoff and flight, of one Russian jet from the Hmeimim airbases that dropped five bombs.

Among the dead was rescuer Amir al-Bunni.

Six people were killed in Saraqeb, northeast of Ma’arat al-Num’an on the M5.

Khan Sheikhoun, also on the highway, was bombarded throughout the weekend. At least 23 people, including children and another rescuer, were killed in and near the “ghost town” on Sunday.

Russia’s Defense Ministry tried to distance itself from the latest mass killing, insisting that claims of Russian involvement were “a fake” from the White Helmets.

Russia denies committing the massacre !!
Important update from the director of #MaaratalNuman sector on the field situation and the massacre committed..
4:30 pm #Syria time. pic.twitter.com/3GjZbUeCBZ

But Turkey repeated its call on Moscow to end any participation and restrain Assad’s military, “The responsibility to stop the regime attacks is on our neighbor Russia.”

Russian-regime attacks — shattering a demilitarized zone declared by Russia and Turkey last September — have killed at least 650 civilians, including more than 150 children, in Idlib since late April. More than 2,100 people have been injured, and at least 330,000 of Idlib and northern Hama’s 3 million population — about 20% of those remaining in Syria — have been displaced.

Turkson, who heads the Vatican department’s for human development, gave Assad a letter from the Pope which expressed concern for the humanitarian situation in northwest Syria and pressed for a negotiated end to violence.

The note also sought the safe return of more than 11 million Syrians — about half of the country’s pre-conflict population — displaced by the fighting, and the humane treatment of detainees, many thousands of whom have been tortured and killed or died from poor conditions.

Vatican Secretary of State Cardinal Pietro Parolin said, “In the letter sent to President Assad, the Holy Father encourages him to show good will and to work towards finding viable solutions, putting an end to a conflict which has lasted far too long and which has led to the loss of numerous innocent lives.”

According to Syrian State media, Assad did not respond to the Pope’s appeals. Instead, he told Turkson that it was important to put pressure on countries supporting “terrorists”. 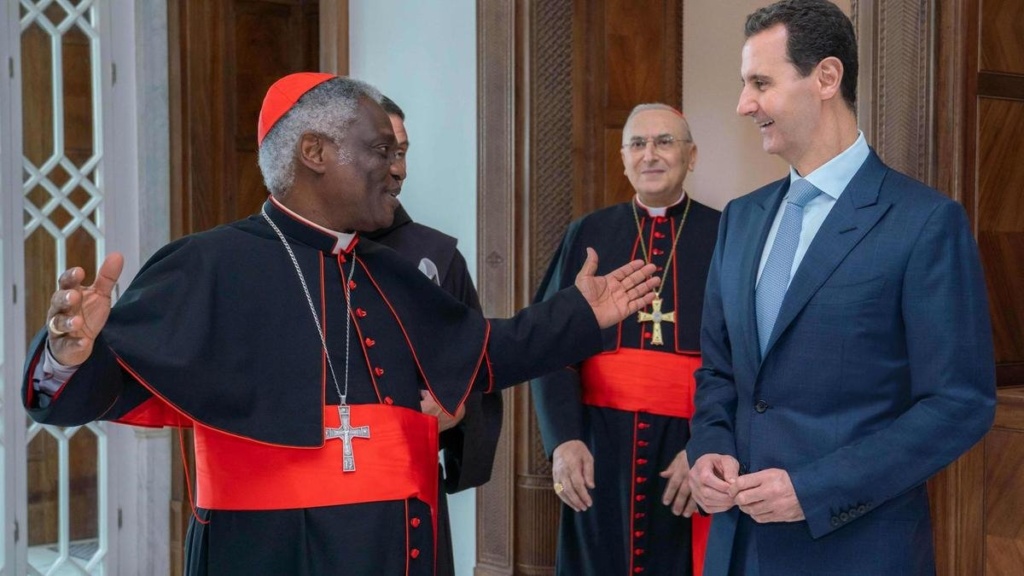