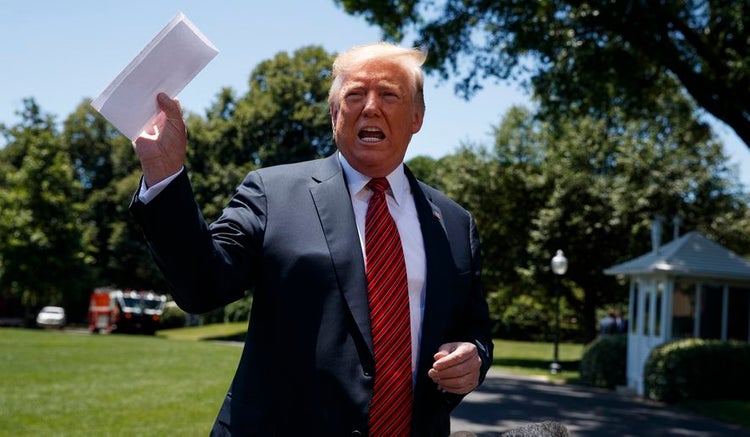 Donald Trump waves a piece of paper about an agreement with Mexico on migrants, White House Lawn, June 11, 2019

Donald Trump persists with his declaration of a great victory for his tariff threat against Mexico, pursuing his anti-immigrant message for re-election in 2020.

But amid the revelations that Mexico agreed with US officials on the steps in December and March — long before last Friday’s announcement and the lifting of an imminent 5% tariff which could have risen to 25% — Trump is still struggling to demonstrate his Art of the Deal.

Since last weekend’s exposure of the December and March arrangements on deployment of Mexican security personnel and Mexico’s hosting of some migrants awaiting decisions on asylum applications in the US, Trump has loudly spoken about “secret provisions” in Friday’s agreement.

On Tuesday, as Trump left the White House for an Iowa rally, he waved a piece of paper which supposedly had the terms of the “very long and very good” agreement.

But he gave no details. Mexican Foreign Minister Marcelo Ebrard knocked back the flourish: he said that there was no additional deal beyond Friday’s public statement, “We don’t have anything to hide.”

And the Washington Post’s reconstruction of the piece of paper, from images taken by its photographer, also undercut Trump.

The paper merely said that “each party would accept the return, and process refugee status claims, of third-party nationals who have crossed that party’s territory” — leaving unclear whether there was any extension of Mexico’s commitments from December and March.

The document concluded that if the US was unsatisfied with Mexico’s steps in the next 45 days, the Mexicans would have another 45 days for implementation.

White House officials, including Homeland Security Director Kevin McAleenan, have tried to cover Trump by saying that Friday’s agreement pushed Mexico into implementation — and on a greater scale — of arrangements. They cited the deployment of 6,000 security personnel and a commitment for interception of more migrants.

Mexican Foreign Minister Ebrard said in a Tuesday news conference that the agreement was for just for 45 days for Mexico to prove that it could check migration without agreeing to a “safe third country” deal.

The Trump Administration has pressed for an agreement in which Mexico would hold all migrants coming from Guatemala, on the grounds that migrants must stop in the first country reached after departure from their home areas.

Mexico has resisted the demand, citing the effect on the country’s economy and resources.

Ebrard said yesterday that Vice President Mike Pence pushed for the “safe third” commitment last week — “it seemed like it was third safe country agreement or tariffs” — but Mexico negotiated the 45-day window to divert the demand, showing that its measures will work.

He acknowledged that in 45 days, if Trump is not satisfied, the Administration probably will ask again for a “safe third” agreement. However, he reiterated that Mexico has not made any commitment and that any arrangement will have to be approved by lawmakers and probably negotiated with other countries in the region.