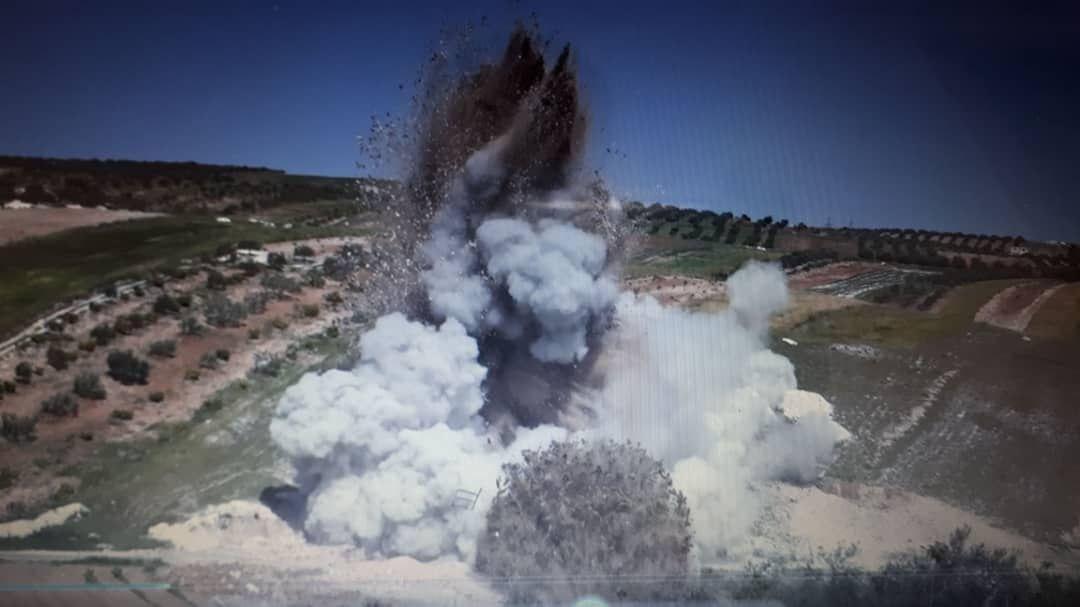 The underground hospital at Hass in northern Hama Province is destroyed by Russian bombing, May 5, 2019

Russia and the Assad regime continued their attacks on opposition-held northwest Syria on Sunday, with more hospitals destroyed or damaged.

Breaking a demilitarized zone announced by Russia and Turkey last September, Assad forces stepped up bombardment of Idlib and northern Hama Provinces from mid-February, with Russia carrying out occasional airstrikes. The assault has been sustained since Tuesday, including attacks on medical facilities and rescuers. Russia is again dropping “bunker-buster” bombs and the regime is using “barrel bombs”, explosive-filled cylinders dropped out of helicopters.

On Sunday there were more than 100 airstrikes — one almost every five minutes — on about 40 locations. The White Helmets civil defense said another eight civilians were killed, including three children and a medic.

The underground hospital in Hass in northern Hama was destroyed with a “bunker-buster” bomb, and the facility in Kafranbel in Idlib damaged.

As a prelude to all-out offensives, rescue workers and medical facilities have been targeted in cases from east Aleppo city in December 2016 to the East Ghouta area near Damascus in spring 2018.

The latest attacks have added to the killing of hundreds of civilians and displacement of an estimated 323,000 since last September.

Those displaced in the past week have gone to camps on the Turkish borders or sought shelter in olive orchards.

Idlib and northern Hama are home to about 3 million Syrians, 20% of the country’s remaining population after more than eight years of conflict. Many of them have fled pro-Assad assaults and forced transfers from other areas of Syria.

Turkish-supported rebels said Russia and the regime, putting aside the 15 to 20-km wide and 100-km long demilitarized zone around Idlib and northern Hama, are trying to seize control of the M4 and M5 highways. The routes link Syria’s largest city Aleppo with Hama and with Latakia on the Mediterranean coast.

There has long been a Russian aim to capture these highways. This is rejected as a principle of our revolution and it would have meant the displacement of tens of thousands of people who live in the area and refuse to be under Russian [rule].

Rebels said they repelled a regime attempt in northern Hama, killing at least 20 troops and destroying a tank with its crew.

Despite the effective dissolution of the demilitarized zone — and regime shelling of one of 12 Turkish observation posts, wounding two soldiers — Ankara has been silent.

In February, at a summit with Turkish and Iranian counterparts, Russian President Vladimir Putin spoke of erasing “terrorists” from the northwest but indicated it was not yet time for an offensive. He repeated the line almost a month ago in another discussion with Turkish President Recep Tayyip Erdoğan. However, officials such as Foreign Minister Sergey Lavrov have maintained the talk of attacks on “extremists”.