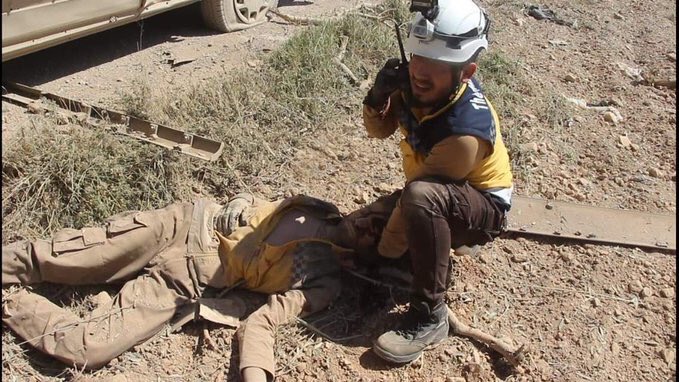 A White Helmets rescuer crouches over his colleague Mohammad Shawa, mortally wounded in a Russian “double tap” bombing on Idlib Province in northwest Syria, May 5, 2019

Russia and the Assad regime stepped up bombing and shelling of northwest Syria on Saturday, killing civilians and a rescuer and striking a Turkish observation post.

The regime had already escalated bombardment from mid-February, killing more than 150 civilians and displacing tens of thousands, with Russia contributing occasional airstrikes and breaking the “demilitarized zone” it declared with Turkey last September.

But the past week’s attacks are among the most intense, building the possibility of a “softening-up” of Idlib and northern Hama Provinces before an offensive to seize at least part of the largest opposition area remaining in Syria.

Seven civilians, including four women and two children, were reportedly killed. Another 20, including seven children and four women, were wounded.

Two children were killed and 9 civilians were injured, after a warplane air strike targeted Muhambel City center in the southern #Idlib this afternoon. Our teams worked to retrieve the victims and managed to rescue several wounded civilians from the rubble. #Syria pic.twitter.com/YZ7uu6Cq2i

The White Helmets civil defense said it has recorded more than 30 civilians killed since Monday. Ahmad al-Dbis of the Union of Medical Care and Relief Organizations said fatalities exceeded 50.

So far Moscow has withheld its enabling of an all-out assault, probably because of the Turkish forces alongside rebels in the northwest since August 2016.

However, in a further sign of steps towards an offensive, rescue workers and medical facilities are being targeted — as they were in the deadly Russian-regime reoccupations of east Aleppo city in December 2016 and the East Ghouta area near Damascus in spring 2018.

Warning: The video contains harsh scenes..
The first moments of the double airstrike targeting our White Helmets team in western #Idlib this afternoon, and the injury of the volunteer Mohammed Shawwa and his subsequent death from his wounds. RIP, Hero. #Syria pic.twitter.com/dfp49wIXSN

Helicopters arriving to evacuate the injured to Turkey:

Now the bombing has returned and is much heavier and has spread very widely in Jabal al-Zawiya and rural northern Hama. The planes are not stopping at all and the bombing is continuing in a very big way like yesterday and worse.

About 3 million people — 20% of Syria’s remaining population — live in Idlib and northern Hama. Many have fled other parts of the country amid pro-Assad assaults and forced transfers of population.