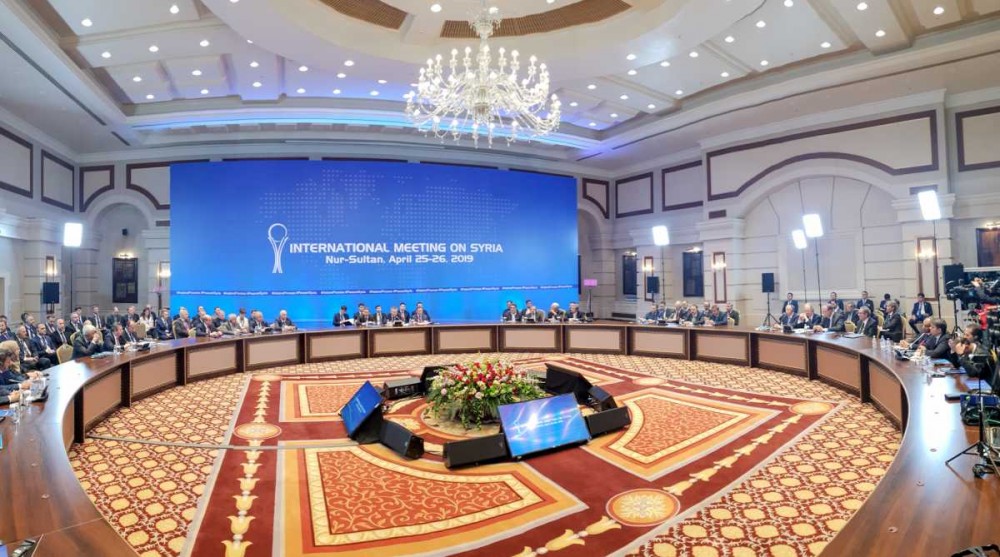 : Russia has followed the end of the Astana talks with airstrikes on the opposition area in northwest Syria.

Syrian State news agency SANA said the military had attacked “terrorists…in the countryside of Idle and Ham”. It claimed a civilian in Masyaf in Hama Province was injured by a “terrorist rocket”.

Speaking in Beijing, Russian President Vladimir Putin said Moscow is not planning to enable an Assad regime offensive on the area — for now.

With no sense of irony, he cited civilians’ sense of security.

Desperate moments during the White Helmets' Search and Rescue operations after Russian attacks were launched on #Kafranbel earlier today. A baby and two men were retrieved lifeless from under the massive rubble. Another man was rescued with his legs crushed under concrete. #Idlib pic.twitter.com/ilsfASZNJw

Two days of talks between Russia, Turkey, and Iran have ended with no progress over the political, military, and economic situation in Syria.

The 12th round of discussions in Kazazhstan’s capital Astana failed to agree on the composition of a committee for a new Constitution. The three countries said they will discuss the issue further at the next UN-organized talks in Geneva.

The committee was proposed in Astana in January 2018, but the regime has balked at opposition members proposed for the negotiations and Bashar al-Assad is opposed to any steps that could lead to his departure from power.

Alexander Lavrentyev, Russia’s Syria envoy, tried to cover the lack of advance yesterday, saying the formation of the committee was “at the finish line” after 15 months:

The timing has not been agreed yet, taking into account the upcoming month of Ramadan, it is most likely to happen after that.

But I think by that time Mr [UN envoy for Syria Geir] Pedersen will be able to announce [the committee].

The conference statement also made no reference to any agreement over the opposition area in northwest Syria, where the Assad regime has been persistently shelling in defiance of a demilitarized zone declared by Russia and Turkey last September. More than 140 people have been killed and tens of thousands displaced in Idlib and northern Hama Provinces since mid-February.

Ja’afari turned against the “Turkish regime”, claiming that it “has not complied with its commitments to the Sochi Agreement [for the demilitarized zones] or to remove terrorist organizations from Idlib.”

He assailed US and European sanctions on the Assad regime, over its role in the killing and displacement of Syrian civilians, as “economic terrorism that is escalating through unilateral economic measures”.

He said this was four times the size of the Golan Heights in southwest Syria. The conference condemned this month’s US recognition of Israeli sovereignty over the Golan, occupied in the 1967 Arab-Israeli War.