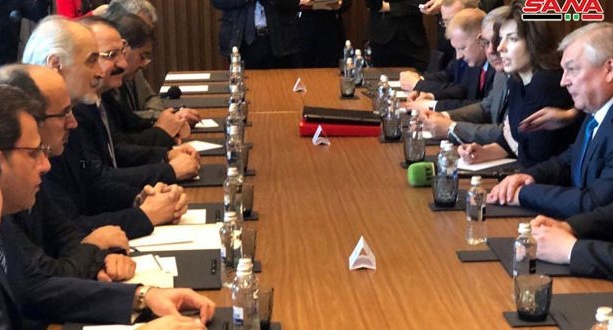 Russia, Turkey, and Iran have convened again over the political, military, and economic situation in Syria, but few details have been given of the opening sessions.

On the first of two days of talks, the three delegations and the UN envoy for Syria, Geir Pedersen, discussed a process for a new Syrian Constitution, first proposed in January 2018 but held up for months primarily by Assad regime objections.

The regime has balked at opposition members proposed for the negotiations, and Bashar al-Assad is opposed to any steps that could lead to his departure from power.

“Even if a Constitutional Committee is created, it will then take a long time to reach a very uncertain result,” a “Western diplomat” assessed.

Delegations considered the opposition area in northwest Syria, where the Assad regime has been persistently shelling in defiance of a demilitarized zone declared by Russia and Turkey last September. More than 140 people have been killed and tens of thousands displaced since mid-February.

Despite its sponsorship of the demilitarized zone in Idlib and northern Hama Provinces, Russia has carried out occasional airstrikes on the pretext of attacking “terrorists”. Moscow is also spreading the lie that rebels and White Helmets are staging chemical attacks, a possible prelude to a Russian-regime offensive.

Turkish forces have been alongside rebels in the area since August 2016, first pushing out the Islamic State and then taking much of the Kurdish canton of Afrin in early 2018.

Plenary sessions will be held on Friday.