TrumpWatch, Day 827: In NRA Speech, Trump Pulls US Out of Conventional Arms Treaty 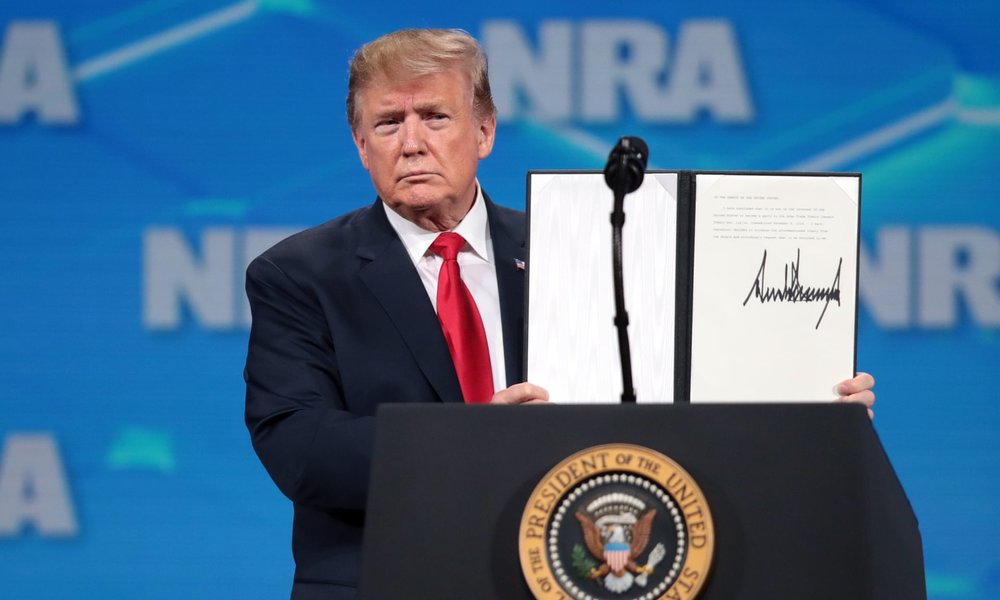 Combining a campaign speech with a snub of international agreements, Donald Trump pulls the US out of a treaty to regulate conventional weapons.

Speaking to National Rifle Association members in Indianapolis, Trump signed a letter on-stage that withdrew America from the Arms Trade Treaty, which tries to hinder the sale of conventional arms to countries that do not protect human rights.

The treaty was brokered by the UN and signed by President Barack Obama, but was never ratified by the Senate. Despite its aims, the accord does not require that the US to alter domestic laws or procedures over its arms sales.

Trump offered an alternate reality, saying his letter was a “big, big factor” in blocking a “badly misguided” treaty.

The US joins North Korea and Iran, who abstained from participation in the treaty.

A “senior administration official” rationalized Trump’s performance, claiming a lack of treaty compliance by large arms exporters such as China and Russia. He maintained that the US has its own set of controls to ensure the appropriate sale of arms abroad.

Trump’s National Security Advisor John Bolton is a vehement foe of multilateral arrangements, dating back to his time as Assistant Secretary of State and then UN Ambassador in the George W. Bush Administration. Among the international conventions he opposed were those on chemical and biological weapons and on small arms.

The Trump Administration has also withdrawn from other agreements such as the Paris Accord on climate and the nuclear deal with Iran, as well as expressing the intention to scrap a treaty with Russia on intermediate-range nuclear missiles.

Thomas Countryman, a former Assistant Secretary of State for international security and nonproliferation and lead US negotiator on the Arms Trade Treaty, responded yesterday:

The president’s action today is yet another mistaken step that threatens to make the world less safe, rather than more secure.

It is sad, but to be expected, that this president opposes efforts to require other countries to meet the high standards of U.S. military export decisions.

Elsewhere in the speech, Trump railed against a “corrupt” news media and repeated his claim that he had faced an attempted overthrow of his Administration, amid investigations of Trump-Russia links:

They tried for a coup, didn’t work out so well. Didn’t need a gun for that one, did I?