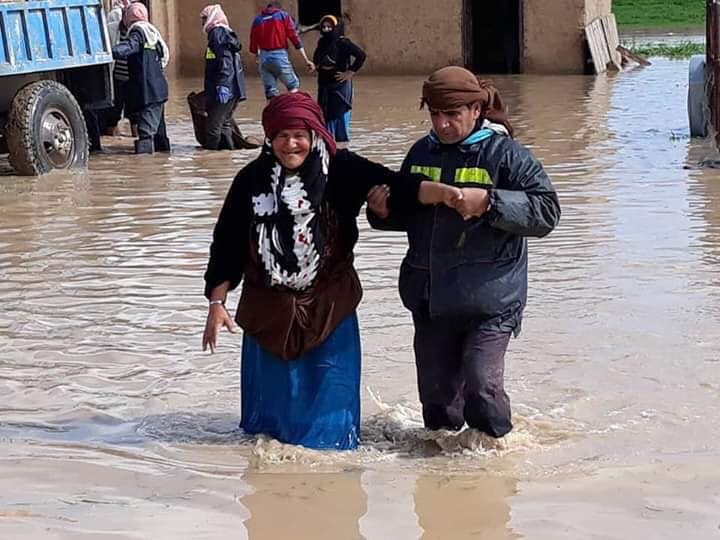 A man helps an elderly woman through flood waters in Tel Hamis in northeast Syria, in a picture posted on March 30, 2019

Residents struggled to walk in knee-high water, with women holding hands with small children. People were rescued from cars, and livestock died in fields after several days of storms.

Ismail Abdallah, a volunteer with the White Helmets civil defense, said affected areas include Atmeh and Azaz near the Turkish border and al-Bab north of Aleppo.

“We received dozens of calls from people who asked to be evacuated on Saturday night,” Abdallah said.

“Hundreds of tents along the Turkish border were destroyed. Roads and schools are closed,” said Samer Daabol, a freelance photographer in Atmeh.

Local media reported that a 35-year old woman and a child died in Kurdish territory in Hasakah Province.

More than six million people — about 25% of Syria’s population — have been displaced since March 2011. Another 5.6 million are registered refugees outside the country.

The already bleak living conditions of several camps in northern #Syria have come under heavy and damaging rains. #WhiteHelmets are on site providing as much aid and assistance as possible in the affected camps as the flooding continues. pic.twitter.com/raI4aAn0xV

Camps in Northern Syria are experiencing a true humanitarian DISASTER.
19 camps have been impacted by the storms in northern Idlib, especially in Tal Karama. Hundreds of tents occupied by more than 1,800 families have been swept away by the floods caused by the heavy rain.#Idlib pic.twitter.com/snqPIdwQB0