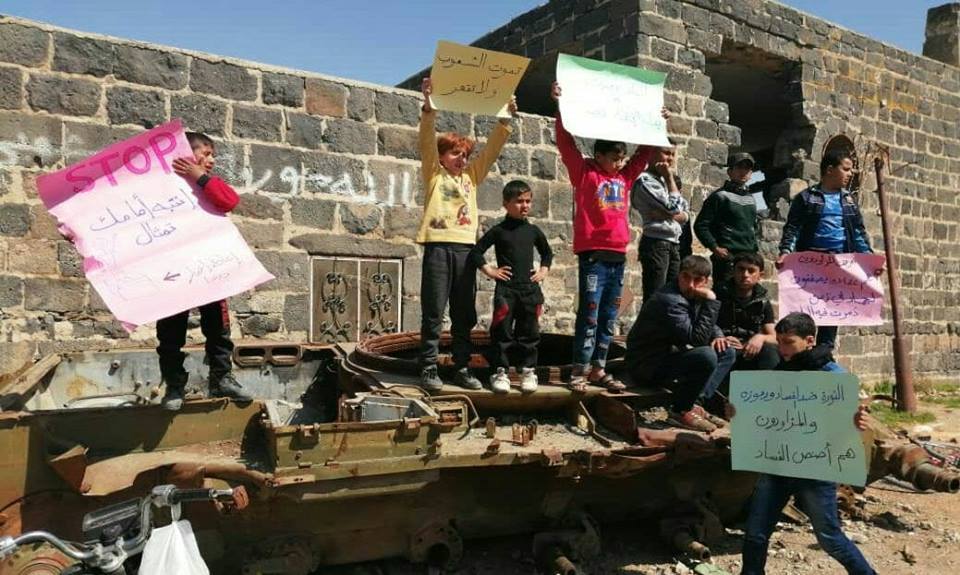 Children stand atop a wrecked regime tank with signs of protest against a new statue of former leader Hafez al-Assad, Daraa, Syria, March 10, 2019

Protest has returned to Daraa, the original site of Syria’s 2011 uprising, with hundreds of people marching over the erection of a new statue of Bashar al-Assad’s father Hafez.

The statue of Hafez, who was President from 1970 to 2000, was toppled at the start of the uprising — sparked in Daraa by the arrest and abuse of boys who were spraying graffiti on walls and then the regime’s repression of protests.

Residents walked through the damaged Old City calling for Assad’s overthrow: “Syria is ours, not for the house of Assad.”

Youths carried a placard: “It will fall. Your statue is from the past, it’s not welcome here.” Another placard declared, “The country has been destroyed and, instead of reconstruction, we place memorials.”

Now in central #Daraa
“Long live #Syria!
Down with Bashar!”
After the regime tried to install a statue of Hafez in central Daraa pic.twitter.com/4hMBYYcQli

Security personnel closed off the area to stop people from other parts of the city joining the demonstration.

The regime had given schools and public employees a Sunday vacation to attend the inauguration of the new bronze statue of Hafez. The gathering broke up after gunfire near the square caused panic, a witness said.

Pro-Assad forces reoccupied Daraa and the rest of opposition-held southern Syria this spring and summer. Reports of unrest have circulated, with smaller marches of protest and attacks on regime checkpoints. Using information from former rebel commanders, opposition negotiators, and local activists, Syria Direct has confirmed at least 15 assassinations since July

More than six months later, assassinations and disappearances are targeting all sides in Daraa’s fractious political landscape: not only former rebel commanders and opposition supporters, but also Syrian army officers, security forces and local officials affiliated with the Syrian government.

Residents complain that services have not been fully restored and that there are chronic power shortages. Men fear forced conscription into regime forces.

Demonstration in #Daraa grows with people calling for freedom#Syria pic.twitter.com/WYQoBbN08D

From today's demonstrations in the #Daraa Freedom forever #Bashar_al_Assad falls

Videos shared by activists online show demonstrators carrying signs and shouting slogans as they march through a southern neighborhood of Daraa city. Chants included ‘Death, not humiliation!’ and ‘With our souls, we’ll redeem our country!’ 2/6 pic.twitter.com/FgLwC4Vzq1