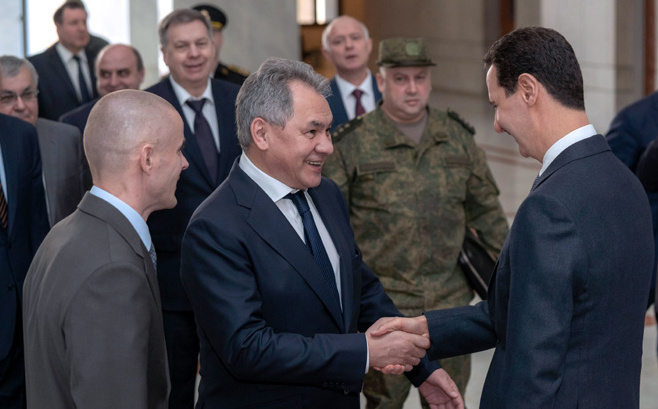 Bashar al-Assad has hosted the Russian Defense Minister, in a meeting that displayed concern about the ongoing partition of Syria and reconstruction of regime-held areas.

Russian and Syrian State media prodcued anodyne readouts of Assad’s discussion with Sergey Shoygu on Tuesday, with declarations of “high level coordination in all fields” and “steadfastness in the face of terrorism”.

Shoygu said, “Russia will continue offering all forms of possible support to the Syrian people to complete liberation of all Syrian territories and preserve the territorial integrity, sovereignty and independence of Syria.”

The phrase “territorial integrity” implicitly touched on tension over both opposition-held northwest Syria and Kurdish control of 27% of Syrian territory, in the north and east of the country.

On Monday, the Assad regime’s Defense Minister, Gen. Ali Abdallah Ayoub, warning to both the opposition and Kurds: “We do not compromise when it comes to our right to defend its sovereignty.”

But any regime military operations are dependent on support from Russian forces, through extensive bombing and “advisors” on the ground.

Last September Russia suspended an imminent offensive on Idlib and northern Hama Provinces in northwest Syria, where more than 3 million Syrians — 20% of the country’s population — live. Instead, Moscow joined Turkey in declaration of a demilitarized zone around the area.

Russia has occasionally joined regime forces in air and ground attacks, citing action against “terrorists”, but has given no sign of support for an offensive.

Encouraged by Russia, the regime has held talks with Kurdish factions about control of north and east Syria, but has made no progress.

Syrian State news agency SANA obscured these difficulties with the portrayal of the Assad-Shoygu talks:

Viewpoints were identical on the necessity of continuing the joint work to put suitable solutions to restore security and stability to those regions and adopt probable procedures to not allowing the hostile countries…to achieve, through their policies and practices in the two regions, what they have failed to do during the years of crisis.

Russian State media, announcing that Shoygu brought a message from President Vladimir Putin, cloaked a reference to the reconstruction issue in the phrase “issues around Russian humanitarian aid to Syria and the return of refugees”.

Syria has suffered more than $400 billion in damage and lost more than 75% of its GDP in the eight-year conflict.

Most of the international community are refusing to give the regime any funds unless there is a process for political transition, but Assad has ruled out relinquishing his hold on power.

Meanwhile, Russia and Iran — the two allies propping up the regime — face economic difficulties and can provide only a fraction of funds. In large areas reoccupied by regime forces since 2016, little progress has been made on repair of destroyed homes and businesses.

Shoygu pulled a curtain over the situation with the proclamation, “We have managed to preserve the Syrian state and create conditions for the people to return to peaceful life.”

But he tipped off Moscow’s concern, “The Western states are trying to minimize all the positive developments in Syria and create new obstacles to the conclusion of the crisis.”