Syria Daily: Putin Wags Finger Over Opposition Idlib, But No Details of Action 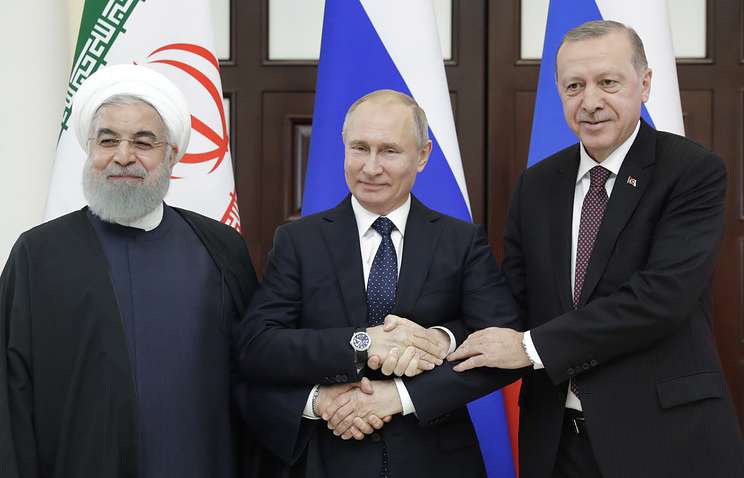 At a summit with Turkish and Iranian counterparts, Russian President Vladimir Putin has issued a warning about opposition-held Idlib Province in northwest Syria, but has not said if Moscow will break the demilitarized which it declared with Ankara last September.

Putin hosted Turkey’s Recep Tayyip Erdoğan and Iran’s Hassan Rouhani in the resort city of Sochi on the Black Sea on Thursday. The Kremlin said he told his guests:

We should not put up with the presence of terrorist groups in Idlib. That’s why I propose we consider practical concrete steps that Russia, Turkey and Iran can take to completely destroy this hotbed of terrorists.

Putin said afterwards that the three countries had agreed to take “extra steps”, but did not say what they were. Kremlin spokesman Dmitry Peskov said no military operations had been agreed.

In September, Russia and Turkey declared a 15 to 20-km wide and 100-km wide demilitarized zone around Idlib and northern Hama Provinces, where more than 3 million Syrians — 20% of the population still in the country — live. The agreement suspended an imminent Russian-Assad regime offensive to overrun the last major opposition area in Syria.

The hardline Islamist group Hay’at Tahrir al-Sham, which once was linked to Al Qa’eda, took part of Idlib from rebel factions in 2017 and seized more territory in Idlib, northern Hama, and western Aleppo Provinces at the start of this year.

Rouhani said he support tough action. Erdoğan did not respond to Putin’s suggestion of a joint plan. After the summit, he said that Turkey would do everything possible to stabilize Idlib but repeated his warning that any moves must not set off a humanitarian catastrophe.

Idlib as Bargaining Chip for Northeast?

Meanwhile, Russia put pressure on Erdoğan over his plan to extend the Turkish presence in Kurdish-held northeast Syria, if the US withdraws its 2,000 troops supporting the Kurdish-led Syrian Democratic Forces.

The Turkish President has said a 32-km (20-mile) “safe zone” should be established along the Turkish-Syrian border, across the Kurdish cantons of Kobani and Cezire. The plan is being checked by American resistance, even as US agencies fight to push back Donald Trump’s December 19 order for US troop withdrawal.

Syria Daily, Feb 10: Erdoğan Steps Up Attack on US Over Kurdish-Held North

Russian Foreign Minister Maria Zakharova said, “The question of the presence of a military contingent acting on the authority of a third country on the territory of a sovereign country and especially Syria must be decided directly by Damascus. That’s our base position.”

After the summit, Erdoğan said Turkey, Russia, and Iran are “on the brink” of taking steps east of the Euphrates River. He did not say what they were.

The statements raised speculation by analysts that Moscow will use the Turkish-Kurdish issue to exercise leverage over Idlib, offering Ankara a freer hand in the northeast in return for operations to take control from the opposition in the northwest.