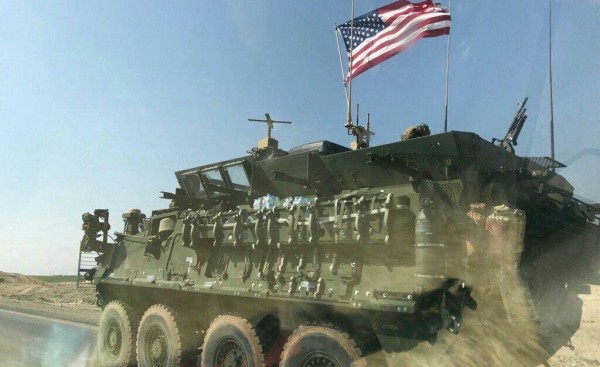 A US armored vehicle near Manbij, Syria, March 2017

Two US troops and two civilian personnel were among 16 people killed by an Islamic State bombing in northern Syria on Wednesday.

The suicide attack in Manbij in western Aleppo Province could complicate Donald Trump’s December 19 order for the withdrawal of all 2,000 American military personnel from Syria.

Trump said that the troops can be removed because the Islamic State has been “completely defeated”, but US agencies have pushed back, warning that ISIS — while reduced to a pocket of territory along the Iraqi border in eastern Syria — can still carry out operations.

Hours after the attack, the US military confirmed the deaths of the four Americans and said three troops were wounded.

Claimed footage of moment of blast:

A spokesman for the US-led coalition said the American troops were killed while conducting a routine patrol in the city. However, witnesses said the bomber attacked a restaurant where US personnel were meeting members of a local militia: “An explosion hit near a restaurant, targeting the Americans, and there were some forces from the Manbij Military Council with them.”

A Pentagon spokeswoman said that only two US troops have previously been killed in action in Syria. There have been two non-combat fatalities.

US and Turkey agreed last summer to patrol Manbij, a mainly-Arab city taken from ISIS by the US-supported, Kurdish-led Syrian Democratic Forces in August 2017.

The arrangement has been under pressure from Turkey’s Erdoğan Government, which has criticized Washington for not ensuring the withdrawal of the Kurdish militia YPG from the area.

Syria Daily, Dec 30: Turkey & Russia Agree “Coordination” After US Leaves — But What About Manbij?

Pence: We Have Defeated ISIS

Soon after news broke of the attack, Vice President Mike Pence insisted, “The Caliphate has crumbled. ISIS has been defeated”:

Here's @VP Mike Pence proclaiming proudly and unequivocally today — mere hours after a bombing in Syria that ISIS has taken credit for killed at least 4 American troops — that "ISIS has been defeated."

As we begin to bring our troops home, the American people can be assured, for the sake of our soldiers, their families, and our nation, we will never allow the remnants of ISIS to reestablish their evil and murderous caliphate.

Turkey, which has been trying to split Trump from US officials like Bolton, also maintained the call for American departure. President Recep Tayyip Erdoğan said he did not believe the attack would affect the order for withdrawal “because I saw honorable Trump’s determination on this point”.

LIVE — Erdoğan: The attack in Manbij might have been meant to affect Trump's decision to pull out from Syria. But as I saw Mr. Trump's decisiveness, I don't think a backward step would follow such a terror attack. Otherwise, it would mean a victory for Daesh pic.twitter.com/sErlWZLwh5

Trump did not mention the American deaths in his Wednesday comments.