Brexit, the Far Right, and Antagonistic Politics in the UK 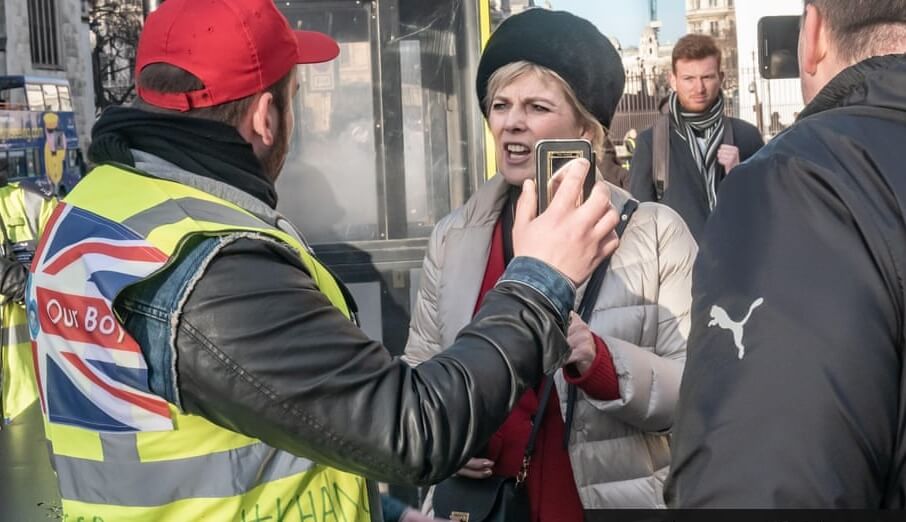 Dr Alex Oaten of the University of Birmingham writes for The Conversation:

In a shocking video circulating ahead of the House of Commons’ Brexit vote, Conservative MP Anna Soubry is seen being mobbed on the street outside Parliament. A group of angry pro-Brexit protesters bark questions at her and taunt her with jibes of “Nazi” and “Fascist”. Their leader, James Goddard, wearing a high-vis yellow jacket, waves his phone around as he shouts at her. This small but vocal and intimidating group have been haunting Parliament recently, getting in the faces of Remain-supporting MPs and journalists.

These people do have a right to protest. Free speech and free assembly are cornerstones of democracy. However, democracy also necessitates an acceptance that others may legitimately hold opposing viewpoints to our own and, with it, a willingness to listen to such views.

Brexit, the Far Right, and Antagonistic Politics in the UK

It was clear that the demonstrators who surrounded Soubry were interested in neither debate nor discussion. As the gang circled, hurling multiple questions at her, along with a steady stream of abuse, it became apparent that these protesters were interested in neither answers nor discussion. They were there to create a highly antagonistic spectacle for consumption on social media.

After the thugs chanted Nazi at Anna Soubry while she was on BBC, I went to check on her. But she had company… pic.twitter.com/II7nIdqMoF

Since the EU referendum in 2016, political discourse has become increasingly polarized. There is a fine line between democratic debate and populist antagonism. Brexit has unleashed an “us” and “them” mentality that is dividing our democracy along increasingly antagonistic fault lines.

Conflict will always exist within democracy and Brexit is perhaps the starkest reminder of this. After all, Remainers and Leavers cannot both have their way.

Conflict cannot and should not be eradicated within a democracy because, as the political theorist Chantal Mouffe has argued, “the specificity of modern democracy is precisely the recognition and the legitimation of conflict”.

While conflict is inevitable, it is also essential for the health of our democracy that the conflicting sides recognise each other’s right to exist and their right to hold and defend an opposing view. This is the difference between “agonism”, which is defined by Mouffe as a struggle between adversaries who still recognise each other’s rights, and “antagonism”, which is a struggle between enemies. Those who mobbed Soubry on Monday demonstrated the increasingly antagonistic nature of Brexit politics.

When we start screaming “Nazi” at each other – and when we use mob tactics to intimidate our opponents on the street – we are no longer operating within the realms of agonism because we are no longer respecting our adversary’s right to exist and hold a contrasting opinion to our own. Instead, we are fighting an enemy whose position we view as a threat to our existence and who, consequently, we seek to destroy. This is the politics of pure antagonism, the politics of populism.

Examples of this antagonism have been evident in different forms since the referendum. In December the UK Independence Party sponsored a Brexit Betrayal rally, where angry protesters and a collection of far-right groups came together in London with a portable gallows for Theresa May the “traitor”. This language is part of a wider populist discourse that is inherent among some far-right pro-Brexiteers, who claim that the “people” are being “betrayed” by “traitors” within.

Such antagonistic language is not only the domain of far-right street protest movements. In November 2016 the Daily Mail famously ran a headline, “Enemies of the People”, lambasting the three judges who had ruled that the UK Government would need the approval of parliament to invoke Article 50 to open Brexit negotiations. The headline, complete with pictures of the judges, presented the “people” as a homogenous group who were in an antagonistic struggle with their “enemies” who posed an existential threat. Such headlines only serve to add credence to far-right narratives.

While far-right groups and some in the pro-Brexit media are clearly using highly antagonistic language, it should be noted that some Remainers have not been averse to ratcheting up the tension, referring to pro-Brexiteers as “gammons” – a clearly pejorative term.

"This is astonishing. This is what has happened to our country"

Ultimately, whether you are likening your opponents to dead animal meat or to a dictator isn’t really the issue; both constructions are part of the same process of creating and sustaining an antagonistic frontier that simplifies and divides “us” and “them” and which suggests that “they” have no right to an opinion.

Sadly, this form of antagonistic politics cannot easily be resolved or even reduced. It is likely that up-close abuse of politicians and journalists will continue, despite police promises to step up protection. And, while Goddard’s Facebook account has been deleted, such action is only likely to feed his supporters’ belief that they are the victims of establishment “traitors”.

One need only look at Tommy Robinson, the former leader of far-right group the English Defence League, to see how clashing with the establishment can actually help your message resonate with supporters. Robinson is now an adviser to the UKIP leader.

The highly public abuse of Soubry should serve as a reminder to those of us who truly value our democracy that, unlike the mob outside Parliament, we need to listen as well as to speak.