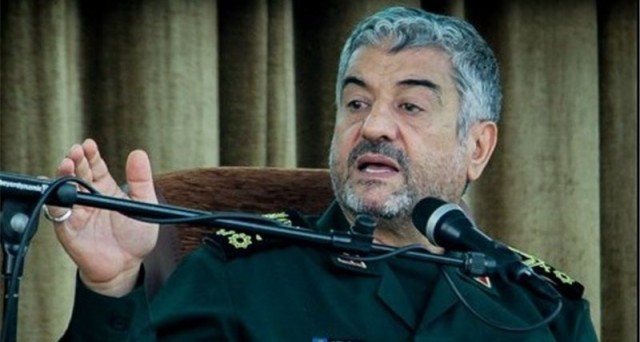 Iran’s Revolutionary Guards have reiterated that they will remain in Syria, propping up the Assad regime’s military in the 94-month conflict.

Guards commander Maj. Gen. Mohammad Ali Jafari (pictured) said Wednesday, “We will protect all of the military advisors as well as weapons and equipment that we have deployed to Syria in order to reinforce the Islamic resistance fighters and support the people of this Islamic country.”

Jafari dismissed Israel’s demands for the withdrawal of Iranian forces: “Rest assured that your ridiculous threat means nothing to us,” Jafari said of Netanyahu’s words.

In a rare confirmation of Israel’s missile strikes on pro-Assad targets, including bases with Iranian commanders and Iranian-led foreign militia, Netanyahu acknowledged raids last Friday on a weapons warehouse at Damascus International Airport.

Israel has periodically struck Assad regime, Iranian, and Hezbollah positions throughout Syria’s conflict. The attacks initially focused on Iranian transfers of weapons and missiles to Hezbollah and on the movement of Iranian and Hezbollah personnel to southwest Syria near the Israeli-occupied Golan Heights. In the past year, they have expanded to support Netanyahu’s demand for Iranian military withdrawal.

Just beware that you are twisting the lion’s tail. Fear the day that Iranian precision-guided missiles come down on your head roaring, and avenge all the blood that you have shed from the oppressed Muslims in the region.

Iran’s Foreign Ministry spokesman Bahram Qassemi also issued a threat against Netanyahu’s “pointless propaganda”,
“We will teach them how to talk and walk if necessary.”

Tehran has provided military, economic, and political support for the Assad regime since the Syrian uprising began in March 2011. In autumn 2012, the Revolutionary Guards prevented the collapse of Assad’s military with a program to train and equip 50,000 militia. In 2015, alongside Russian air and ground operations, Iran expanded its use of its troops and Iranian-led militias to secure regime-held parts of Syria and erode opposition-held territory.