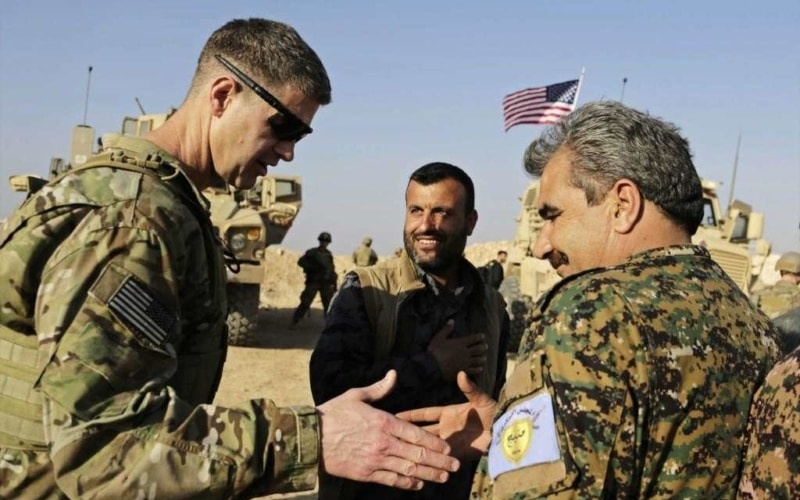 Putin told journalists at his annual year-end news conference, “On this, Donald is right. I agree with him.”

Analyst Nicholas Heras says fighters of the Deir ez-Zor Military Council in eastern Syria, which works with the US-led coalition, are now defecting to the Islamic State.

Heard within the last hour at least 50 DEZMC fighters went MIA after word reached them of Trump's decision. Feared defections to ISIS. Source supports CJTFOIR efforts in DEZ. Trust the source, and this seems to show how Trump's decision is already fraying C-ISIS effort on ground.

Turkey’s military chief has moved quickly to capitalize on Donald Trump’s order, saying Kurdish fighters east of the Euphrates River in Syria “will be buried in their ditches when the time comes”.

Gen. Hulusi Akar, during a visit to a Qatari-Turkish joint military base in Doha, pointed to offensives both on Manbij, west of the Euphrates, and territory to the east which Turkey has been shelling since late October.

Now we have Manbij and the east of the Euphrates in front of us. We are working intensively on this subject.

Right now it is being said that some ditches, tunnels were dug in Manbij and to the east of the Euphrates. They can dig tunnels or ditches if they want, they can go underground if they want, when the time and place comes they will buried in the ditches they dug. No one should doubt this.

France will keep its forces in Syria despite Donald Trump’s order to withdraw all American troops.

“For now of course we remain in Syria,” said European Affairs Minister Nathalie Loiseau. “The fight against terrorism is not over.”

France has fighter jets in Jordan and artillery along the Syrian border in Iraq, as well as special forces inside Syria.

“It’s true that the coalition has made significant progress in Syria, but this fight continues, and we will continue it,” Louiseau said.

He explains, “A senior administration official was able to answer no substantive question about Syria troop withdrawal. In short, they have no idea how this is going to happen.”

Gen. Joseph Votel, the head of US Central Command, and Brett McGurk, the US envoy to the anti-Islamic State coalition, strongly protested the withdrawal. Both spoke of the necessity of Kurdish fighters in defeating ISIS, and said US departure would leave them vulnerable to Turkish attack.

Votel also noted the bolstering of Bashar al-Assad in power.

McGurk told reporters last week that the US maintain a presence to ensure no revival of ISIS: “We know that once the physical space is defeated, we can’t just pick up and leave. We want to stay on the ground and make sure that stability can be maintained in these areas.”

The “senior White House official” said, “We are under no illusions that ISIS writ large or the scourge of Sunni radical terrorism has in some way gone away.” However, he said that statements by Votel, McGurk, and National Security Advisor John Bolton — who had asserted the US will remain in Syria as a buffer against Iranian influence — did not matter: “[Trump] gets to do that. That’s his prerogative.”

Current and former officials said Trump’s order is a rebuke to Defense Secretary Jim Mattis, who had argued that the in Syria is not over and who tried to explain to Trump that withdrawal will bring more turmoil in the region.

The White House official referred questions about the process of withdrawal to the Pentagon, but officials there said they could give no clarification.

Mattis, Secretary of State Mike Pompeo, and Bolton met Monday as Trump was said to have decided on withdrawal. US officials argued against the departure, but reportedly gave up trying to get Trump to change his mind by Tuesday night.

One Pentagon official suggested that Trump made the announcement to divert from his troubles as the Trump-Russia inquiry and other investigations close on him.

ORIGINAL ENTRY: In an abrupt move, the Trump Administration is withdrawing all US military personnel from Syria.

Officials said the decision, made on Tuesday, covers the entire force of more than 2,000 troops in northern and eastern Syria.

Erdoğan has told audiences since the discussion that Trump accepted the Turkish case for US detachment from “terrorists”, the Kurdish militia YPG backed by Washington through the Syrian Democratic Forces.

The US official confirmed this: “Everything that has followed is implementing the agreement that was made in that call.”

News of Trump’s command came hours after confirmation of a $3.5 billion sale of US Patriot missiles to Ankara.

The move would effectively abandon the Kurdish-led SDF, created by the US in October 2015 to push back the Islamic State. The departure would open the way for pro-Assad forces to retake territory controlled by the Kurds — about one-third of Syria.

The largest US personnel base is in Tanf, in eastern Syria near the Iraqi and Jordanian borders, but it also has a series of posts in Kurdish-controlled territory in the north and northeast.

A map of US and Russian positions in Syria at the start of 2018: 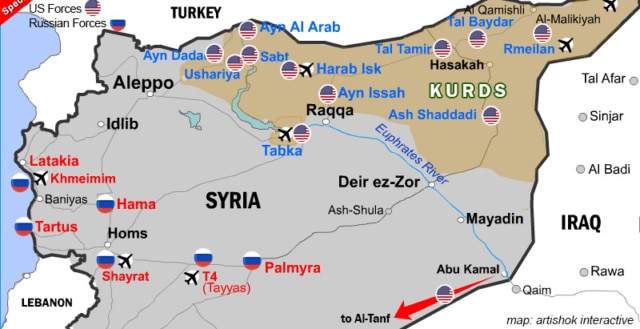 Syrian rebels who have been trained at Tanf for the anti-ISIS campaign would be exposed to regime attack, and 50,000 displaced Syrians in the Rukban camp — in the 55-km exclusion zone around the base — face an uncertain future.

The withdrawal would also give way to Turkey, which has promised an offensive against the Kurdish militia YPG, the leading force in the SDF. Turkish President Recep Tayyip Erdoğan repeated this week that the attack against “terrorists”, both west and east of the Euphrates River, is imminent.

Turkish forces have shelled YPG positions east of the Euphrates since last October. The two sides clashed in northern Syria last week, bringing an expression of concern from the Pentagon.

The SDF has been trying to capture the last major Islamic State pocket in eastern Syria, in and near the town of Hajin. The Forces said over the weekend that they have taken much of the town but are still facing resistance.

WH press sec: we have started returning US troops home as we transition to the next phase of the campaign pic.twitter.com/Z8e5Iyi6Fh

But Pentagon officials are reportedly still trying to talk Trump out of the decision, saying it would be a betrayal of Kurdish allies.

”At this time, we continue to work by, with and through our partners in the region,” said Pentagon spokesman Col. Rob Manning.

One Pentagon official said the withdrawal will be phased out over several weeks and US airstrikes against the Islamic State will continue, with Kurdish fighters on the ground as spotters.

Another said the US sought to withdraw troops within 60 to 100 days, although the State Department is removing all its personnel within 24 hours, while a third official said the military timetable could be quicker.

Responding to this, a Pentagon official asks me: “so when does Russia announce their victory?” https://t.co/1kWL3XH9oT 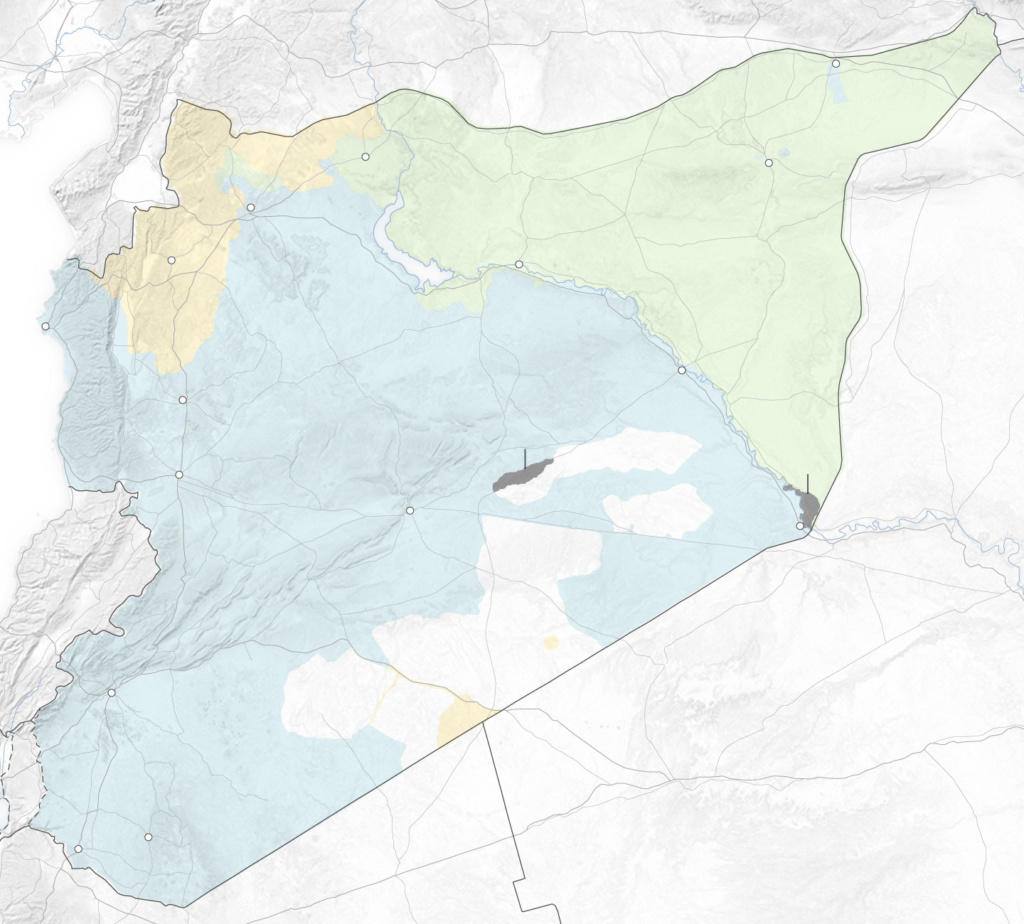 “We Have Defeated ISIS”

Donald Trump sought a withdrawal in March but was pushed back by the Pentagon, which increased the deployment. Trump did freeze funds for recovery and stabilization efforts in northern Syria.

We have defeated ISIS in Syria, my only reason for being there during the Trump Presidency.

He later reinforced his message with a video and the repetition of the dubious claim: “We have won against ISIS. Our boys, our young women, our men — they’re all coming back, and they’re coming back now.”

Russia waged a months-long propaganda campaign pushing for US departure, including disinformation that the Americans have been training “extremists” and sheltering the Islamic State. Turkey stepped up its demands for the US to break from the YPG.

The Executive Director of the Syrian Emergency Task Force reported disarray in the US Government as news spread of Trump’s order:

Joel Rayburn, Deputy Assistant Secretary and Special Envoy for #Syria just cancelled a closed meeting I was attending this morning. Everyone at state department is lost with this sudden reversal of policy by the president. Sources tell me heads are exploding all over DC Iran Wins

The UK, part of the US-led militiary coalition in Iraq and Syria since intervention in 2014, objected to the American withdrawal.

Tobias Ellwood, a Defense Minister, responded to Trump on Twitter.

I strongly disagree.
It has morphed into other forms of extremism and the threat is very much alive. https://t.co/wrRMTBJ4tX

A UK Government statement later said that, despite progress in the campaign against the Islamic State, “We must not lose sight of the threat they pose….Even without territory, [they] will remain a threat.”