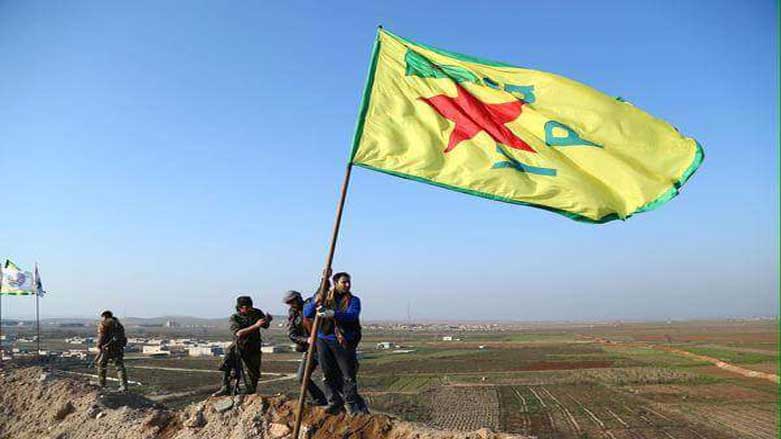 Kurdish YPG fighters at Tel Rifaat, the site of Thursday’s clashes with Turkish forces, in February 2016

Turkish President Recep Tayyip Erdoğan said on Friday that Turkish forces will enter the Syrian town of Manbij if the US does not remove Kurdish YPG militia, as well as targeting Kurdish-controlled areas east of the Euphrates River:

Manbij is a place where Arabs live, but they have surrendered the area to the terror organization. Now we are saying that you should cleanse, remove them, or else we will enter Manbij. I am speaking very clearly.

Turkey and the US reached an uneasy agreement earlier this year for military supervision of the Manbij area, taken by the US-supported, Kurdish-led Syrian Democratic Forces from the Islamic State in August 2016.

But Erdoğan and his official claim that the Americans have not lived up to a commitment to remove the YPG from the town in eastern Aleppo Province.

The Turkish military has clashed with the Kurdish militia YPG in northern Syria, a day after Turkey’s President Recep Tayyip Erdoğan vowed an offensive.

A Turkish soldier was killed by fire from YPG fighters in the Tel Rifaat area, west of the Euphrates River, according to Ankara’s army. It said Turkish forces returned fire.

Erdoğan said Wednesday at a defence industry summit, “Turkey will carry out a military operation in a couple of days….It is time to realize our decision to wipe out terror groups east of the Euphrates.”

A spokesman for Turkish-allied rebels said up to 15,000 men are ready to join the offensive, although no date has been set. Tal Rifaat was taken by the YPG from Syrian rebels in February 2016.

“The battle will be launched simultaneously from several fronts,” Major Youssef Hamoud said. “It will be in Manbij and Tel Abyad and Ras al-Ayn.”

The US and Turkish militaries have maintained a tenuous agreement for oversight of Manbij, the city at the western edge of the advance by the Kurdish-led Syrian Democratic Forces, created by the US in October 2015 to push back the Islamic State.

But Erdoğan and his officials have expressed anger that the US has not forced YPG withdrawal from the city. The President said Wednesday, “Although Manbij is made up of 80-85% Arabs, there are terror organizations there and they are not being honest, they still can’t remove the terrorists from there. Then we will do it.”

US Calls on Turkey to Cooperate

Pentagon spokesman Commander Sean Robertson said in a statement that unilateral military action by any party is of grave concern:

Unilateral military action into northeast Syria by any party, particularly as U.S. personnel may be present or in the vicinity, is of grave concern. We would find any such actions unacceptable.

Coordination and consultation between the US and Turkey is the only approach to address issues of security concern in this area.

Robertson tried to offer reassurance that the American military is committed to working with its Turkish counterpart, but cautioned that “uncoordinated military operations” will undermine the shared interest: “We have solemn obligations to one another’s security. We are fully committed to Turkey’s border security.”

In March 2018, a Turkish-rebel offensive took over almost all of the Kurdish canton of Afrin in northwest Syria, leaving the Kurds in control of the Kobani and Cezire cantons in the north and northeast.

At the end of October, Turkish forces shelled YPG positions east of the Euphrates for the first time.