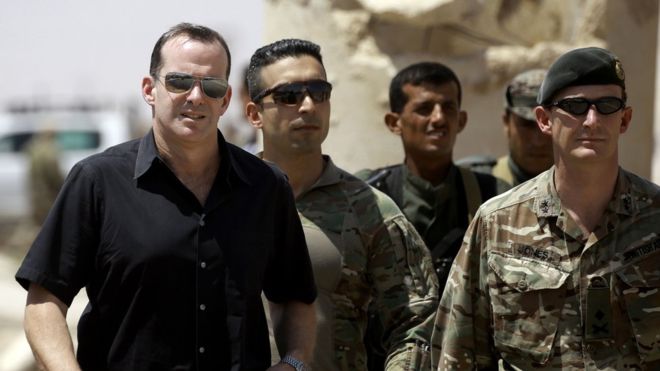 Brett McGurk with a US commander and Kurdish YPG forces in Syria, 2017 (AFP)

Brett McGurk, the US envoy to the anti-ISIS coalition, has resigned in protest at Donald Trump’s order for a full American withdrawal at Syria.

McGurk has been in the role since October 2015, when the US created the Kurdish-led Syrian Democratic Forces to push back the Islamic State in northern and eastern Syria. He had said privately that he was leaving at the end of February, but he brought forward the date to December 31 after Trump’s Wednesday command.

A State Department official confirmed that McGurk had informed Secretary of State Mike Pompeo on Friday of his decision.

McGurk had been briefing coalition partners, before Trump’s surprise announcement, that the US was committed to remaining in Syria, fighting the Islamic State and countering Iran. He told reporters on December 11 at the State Department, “It would be reckless if we were just to say, well, the physical caliphate is defeated, so we can just leave now. Nobody is declaring a mission accomplished.”

In an e-mail to colleagues, McGurk said:

The recent decision by the president came as a shock and was a complete reversal of policy that was articulated to us. It left our coalition partners confused and our fighting partners bewildered.

I worked this week to help manage some of the fallout but — as many of you heard in my meetings and phone calls — I ultimately concluded that I could not carry out these new instructions and maintain my integrity.

Sources said the envoy was also swayed by the resignation of Defense Secretary James Mattis on Thursday, also because of Trump’s insistence on the departure of 2,000 US personnel from Syria.

American officials involved with the SDF in the anti-ISIS campaign have been telling journalists that the Kurdish forces have been betrayed.

A sr military official told me US special forces troops distraught, upset, morally disturbed by having to tell their kurdish allies in Syria that, because of orders, their promises of defense won’t be kept.

Kurdish elements, notably the Syrian Kurdistan Democratic Union Party (PYD) and its YPG militia, control about 27% of Syria. However, they face pressure and possible attack from both Turkey and pro-Assad forces.

The Erdoğan Government considers the PYD and YPG to be part of the Turkish Kurdish insurgency PKK, which has battled Ankara’s security forces for more than 30 years. President Recep Tayyip Erdoğan has pledged an offensive to erase “terrorists”, although he said on Friday that operations were delayed in the wake of Trump’s announcement.

The Assad regime has pledged to retake “every inch” of Syria, including the Kurdish-controlled areas.

Trump Sneers at McGurk and Mattis

Trump decided on the spur of the moment, during a phone call with Erdoğan on December 14 to issue his withdrawal order. He did not consult military or civilian officials, and pushed away their objections through Thursday when Mattis made a last attempt at a reversal of the command.

On Saturday, Trump sneered at McGurk.

Brett McGurk, who I do not know, was appointed by President Obama in 2015. Was supposed to leave in February but he just resigned prior to leaving. Grandstander? The Fake News is making such a big deal about this nothing event!

Trump also jabbed at Mattis, a retired four-star general widely seen as one of the last stabilizing forces in the Administration.

When President Obama ingloriously fired Jim Mattis, I gave him a second chance. Some thought I shouldn’t, I thought I should. Interesting relationship-but I also gave all of the resources that he never really had. Allies are very important-but not when they take advantage of U.S.