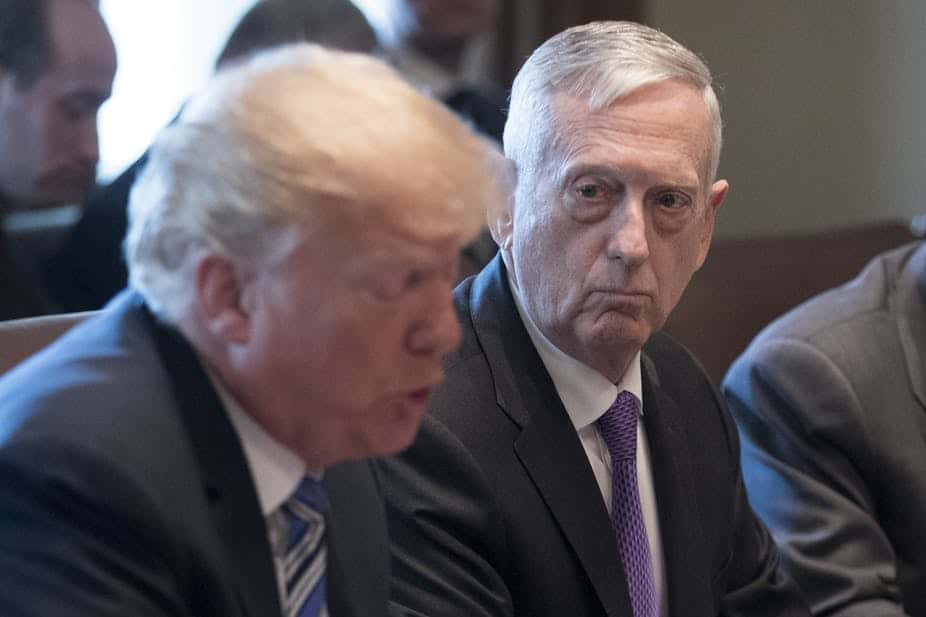 The last adult in the Trump White House playground is gone, and The Donald is throwing his toys around.

Defense Secretary Jim Mattis was one of three retired generals in the new Trump Administration whose hope was to contain an ill-informed, temperamental, and unpredictable President. Now they’re all gone: National Security Advisor H.R. McMaster, pushed out early this year; White House Chief of Staff John Kelly, giving up at the end of December; and Mattis, who resigned Thursday after losing hope that Trump can be restrained from impulsive actions defying his advisors, threatening US allies, and even embracing American foes.

The catalyst for Mattis’s departure is Syria, where Trump has abruptly ordered the withdrawal of all 2,000 US troops and is likely to end the US air campaign against the Islamic State. But the list of his concerns about Trump is far longer, including the American presence in Afghanistan, Trump’s hostility to NATO allies and lack of understanding of the organization, and Trump’s affinity for Vladimir Putin even as Russia pursues an aggressive foreign policy and intervention in US domestic affairs.

As Mattis put it in his resignation letter, a message of rebuke to Trump: “My views on treating allies with respect and also being clear-eyed about both malign actors and strategic competitors are strongly held and informed by over four decades of immersion in these issues.”

With Trump willing to toss aside alliances and shred international arrangements, this could be the most serious challenge to US foreign policy and American partners since 1945. But what does it mean in specific areas?

EA on TRT World and RFI: Mattis Gives Up on Trump — A Breaking Point in US Foreign Policy?
TrumpWatch, Day 700: Mattis Quits With Sharp Rebuke to Trump

American policy has never been clear or decisive over Syria’s 93-month conflict. But Trump’s impulsive order for withdrawal threatens a new cycle of violence while shredding any US approach not only to the country but to the region.

Since autumn 2015, Washington has worked with Kurdish groups to push back the Islamic State in northern and eastern Syria. Those groups, through the Syrian Democratic Forces, have reduced ISIS to a pocket of territory near the Iraqi border. But Trump lied when he tweeted that the battle against the Islamic State is “won”, and ISIS could be resurgent, as in their lightning offensive across Iraq in 2014, if the opportunity presents itself.

More importantly, in the far wider conflict beyond the Islamic State, Trump is abandoning Syria’s Kurds to the predatory ambitions of others. The Assad regime, propped up by Russia, has vowed to regain the one-third of the country controlled by Kurdish factions. Turkey, which considers the Syrian Kurdistan Democratic Union Party (PYD) and its YPG militia as part of the Turkish Kurdish insurgency PKK, has pledged offensives both west and east of the Euphrates River. President Recep Tayyip Erdoğan has said “terrorists” — Kurdish fighters — will be erased, and military chief Hulusi Akar says they will die in their trenches.

US support of the Kurds was never a benevolent mission. Instead, beyond the anti-ISIS campaign, the American presence has become a buffer against the influence of Iran, a key ally of the Assad regime. Now that buffer disappears, and American policy against the Islamic State is in disarray.

The Pentagon was already planning to halve the US presence of 14,000 troops in Afghanistan, but Trump’s shift on Syria may have unsettling effects as Washington still grapples with the situation more than 17 years after 9/11.

Even with the full complement of American forces and international partners, defeat of the Taliban has been a mirage, with the insurgents rebuilding influence to control almost half the fragmented country. The focus has shifted from military victory to negotiation for political resolution.

But Trump has complicated the tactics with his impulsive interventions — leading to his being called an “idiot” by both McMaster and Kelly, and a “moron” by then-Secretary of State Rex Tillerson. He has angered Pakistan, an essential part of the negotiating process, by slashing US military aid, and his declarations about a full withdrawal have emboldened the Taliban rather than brought them to the table.

The US deployment in Afghanistan is part of a NATO-led mission to train, advise, and assist Afghan security forces. But Trump’s threat to NATO is far more than an Afghan drawdown.

The core of the US-European alliance has been bashed repeatedly by Trump, with his false insistence — the outcome of his lack of knowledge — that NATO “owes” money to the US. During his campaign, he labelled the organization “obsolete”, and at last July’s summit, he was still threatening to withdraw the US from the bloc after 69 years. Meanwhile, Trump was casting insults at individual members, notably Germany.

Mattis was an assurance that the US institutional relationships with NATO and its members, the linchpin of alliance, would continue despite the President. But the general’s departure, and the prospect that Trump will want a “yes man” to replace him, could renew uncertainties.

The loss of Mattis will likely deepen the split personality of the Administration towards Russia. Most of Trump’s advisors view Moscow with concern and favor a firm line that includes sanctions and opposition to Russian ventures in areas such as Ukraine and the Baltic States.

But Trump’s admiration for Putin has led to his foot-dragging and even undermining of the American position. He has held out against enforcement of sanctions, until a combination of Congress and US agencies forced his compliance. With Putin standing next to him, Trump has accepted the Russian annexation of Crimea and has chosen the Russian leader over the American officials concluding that Moscow interfered in the 2016 election.

Because a replacement for Mattis is not yet clear, it is uncertain whether the balance of Trump v. agencies will shift. But Putin is already revelling in the chaos within the Administration: asked on Thursday about Trump’s announcement on withdrawal from Syria, he said, “On this, Donald is right. I agree with him.”

In general, Trump and Mattis were on the same page about a firm stance towards Beijing, despite Trump’s affinity for “President for Life” Xi Jinping.

However, they approached the issue from different perspectives. Mattis and the Pentagon were concerned about the build-up of Chinese military capabilities and possible arenas of conflict such as the South China Sea. Trump’s priority was the launching of a trade war with China, underpinned by the President’s fundamental lack of understanding of basic economic concepts.

The trade confrontation, which could escalate sharply after the expiry of a 90-day pause in February, could have military effects. And that could unsettle the Pentagon’s calculations of how the rivalry with China should be approached.

Meanwhile, Trump continues to unsettle the military with his personal affair with North Korea’s Kim Jong-un. Their June 2018 summit was all photo opportunity and no substance, with no movement on issues beyond a reference to “denuclearization”. Instead, Trump has bedevilled his own commanders with sudden declarations such as a suspension of joint US-South Korean military exercises.

US intelligence agencies have repeated that North Korea is still pursuing an expansion of nuclear capability, and Pyongyang said this week that “denuclearization” is conditioned on US withdrawal from the Korean Peninsula. Normally, such a demand would have been rebuffed by Washington, but Trump’s Syria and Afghanistan moves are portents that his overrule of the military is always possible.

The replacement for Mattis is not yet apparent. But it is a marker of the decay of US policy that the question could be close to irrelevant, be the candidate former general and Fox TV pundit Jack Keane or Trump loyalist and defence hawk Senator Tom Cotton. For Trump is now beyond advice and guidance. US foreign policy rests on the whim of this man: angry and frustrated by investigations closing in on him, but bunkered in the self-confidence that he is smarter than anyone else in the room.