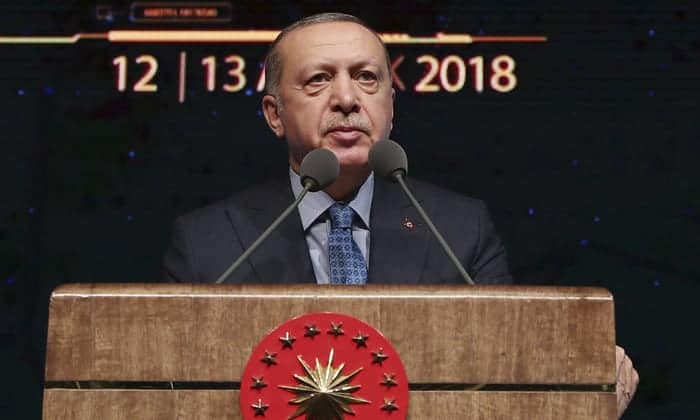 Erdoğan said Wednesday at the Turkish Defense Industry Summit, “Turkey will carry out a military operation in a couple of days….It is time to realize our decision to wipe out terror groups east of the Euphrates.”

The US has backed the Syrian Democratic Forces, led by the Kurdish militia YPG, since its creation in October 2015 to push back the Islamic State in northern and eastern Syria. The SDF has reduced ISIS to a pocket along the Iraqi border and is now trying to seize that area around Hajin.

But Turkey considers the Syrian Kurdish Democratic Union Party (PYD) and its YPG military branch to be part of the Turkish Kurdish insurgency PKK, which has fought Ankara’s security forces for more than 30 years.

Erdoğan said the target of the forthcoming operation will not be US personnel but “terrorists”.

To back up his statement, Erdoğan-linked media is pointing to a Tuesday statement by US President Donald Trump that there is longer a significant ISIS threat to be countered in Syria: “We’ve done a very, very major job on Daesh [Islamic State]. There are very few of them left in that area of the world….Within another 30 days, there won’t be any of them left.”

Erdoğan asserted yesterday, “There is not a Daesh threat in Syria anymore….They are talking about a 150-kilometer zone where they are active. If it is about this zone, Turkey is ready to immediately eliminate any Daesh presence in the area.”

Turkey and the US have established a tense cooperation elsewhere in northern Syria, notably in military oversight of Manbij, west of the Euphrates. The SDF captured the city, with a mainly-Arab population, from ISIS in August 2016.

But Ankara has stepped up calls for American withdrawal — which Trump has sought, but which the Pentagon has successfully resisted. At the end of October, they pressed the campaign with shelling of YPG positions east of the Euphrates for the first time.

The SDF briefly halted its Hajin offensive against the Islamic State in protest, and the US military established observation posts on the Turkish border.

Turkey also appears to have been unsettled by a Sunday statement from General Joseph Dunford, the chairman of the US Joint Chiefs of Staff, that the Americans will train 30,000 to 40,000 anti-ISIS fighters — a long-term commitment, since only 20% of the force is now ready, said the general.

They said they did not supply heavy weapons when we objected to them about arming the YPG. They said they will collect the current arms after the threat of Daesh is eliminated. Who are you deceiving?

In March 2018, a Turkish-rebel offensive took over almost all of the Kurdish canton of Afrin in northwest Syria, leaving the Kurds in control of the Kobani and Cezire cantons in the north and northeast.

Erdoğan also issued a warning about Manbij, the western edge of the SDF’s advance against ISIS: “Although Manbij is made up of 80-85 percent Arabs, there are terror organizations there and they are not being honest, they still can’t remove the terrorists from there. Then we will do it.”