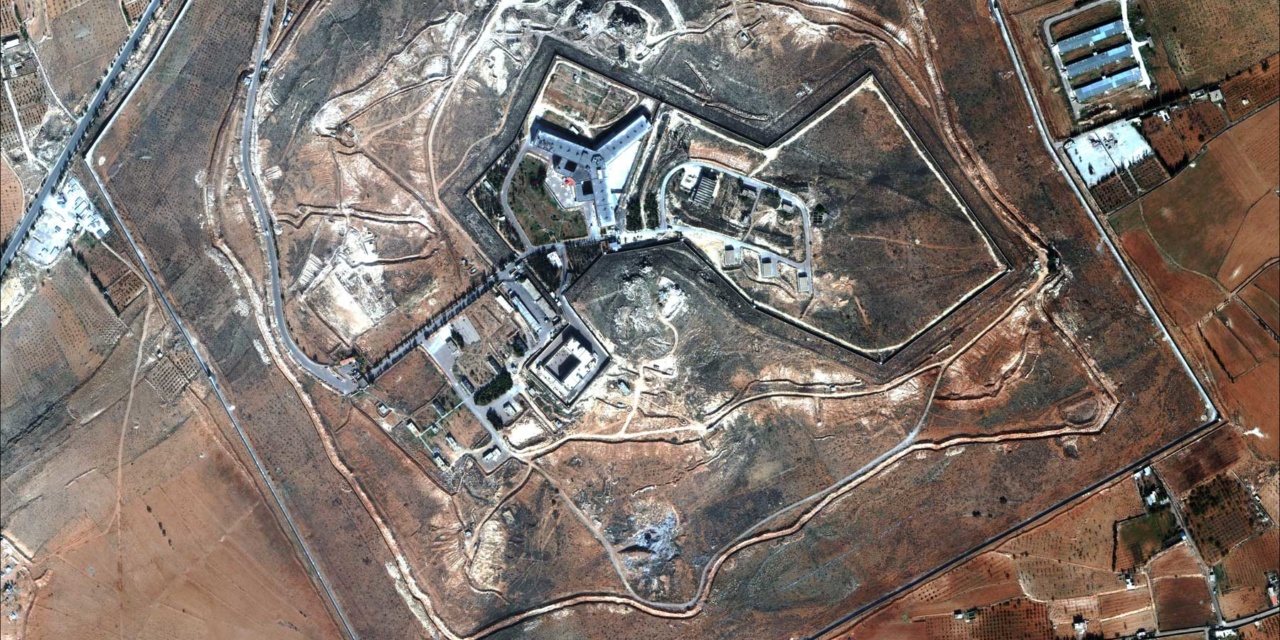 A satellite view of Sednaya Prison near Damascus (DigitalGlobe)

Former detainees say the Assad regime is speeding up executions of political prisoners in Sednaya Prison near Syria’s capital Damascus.

Sednaya has already achieved notoriety in Syria’s uprising, with Amnesty International estimating up to 13,000 hangings between March 2011 and the end of 2015.

Tens of thousands of detainees have been executed or have died from abuse and poor conditions during the conflict. A regime official said this autumn that families would be notified of the demise of at least 50,000 “disappeared” and that the number could reach 100,000.

Now 27 men, recently released from Sednaya, have described the transfer of detainees from jails across Syria to join those executed in pre-dawn hangings at the prison. The rushed killed have sharply reduced the population of Sednaya — once estimated at 10,000 to 20,000 inmates — with at least one near-empty section.

Some of the former prisoners were sentenced to hang, but were freed after relatives paid tens of thousands of dollars.

“There was no room for leniency on my second visit [to the court,” one man said. “Almost everyone in that room was sentenced to death. They were reading the sentences aloud.”

Another spoke of detainees killed before they reached the gallows with guards forcing a metal pipe down the throat of a cellmate: “They pinned him to the wall with it and then left him to die. His body lay among us all night.”

Yet another described prisoners in his own cell being forced to kick to death another inmate.

Satellite imagery of Sednaya from early March shows dozens of dark objects that experts say are consistent with human bodies. Isaac Baker of the Harvard Humanitarian Initiative’s Signal Program on Human Security and Technology concludes, “While analysis and available data does not prove, it does corroborate, and is consistent with, eyewitness accounts of mass executions at this facility.”

Satellite imagery of military land south of Damascus, used for mass graves, appears to show an increase in burial pits and headstones. Defectors who worked in the military prison system said this area is the probable site for the mass burial of Sednaya prisoners.

Survivors such as “Hassan”, now in Turkey, reflect, “The Sednaya memories cannot easily be forgotten. Most of my cellmates are dead now. I keep thinking of the people who are still there.”