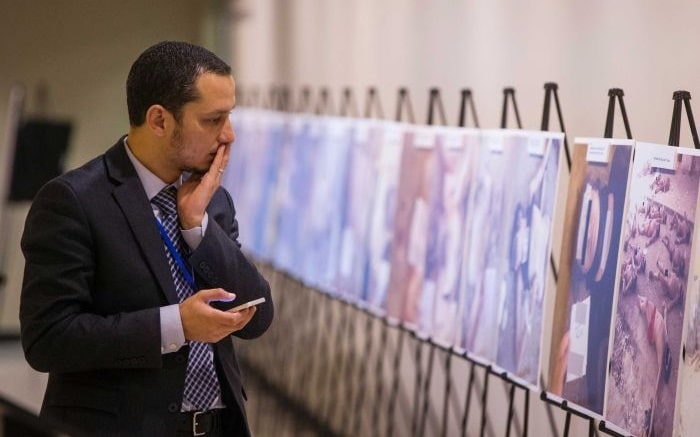 The Syrian Network for Human Rights has issued a report detailing the killing of 13,029 people by torture since Syria’s uprising began in March 2011.

Almost all of the deaths — 12,090, including 161 children and 41 women — were in the prisons of the Assad regime. The Islamic State and rebels were each blamed for 30 killed; Jabhat Fatah al-Sham (formerly Jabhat al-Nusra) for 17; and Kurdish factions for 26.

The SNHR, which has monitored casualties and destruction since the start of the uprising, sets out individual cases of killings and testimonies by survivors. It says 106,727 people are still in detention, 87% of them in regime prisons and “unofficial” detention centers. There are “one or two” deaths each day from torture. In addition, there has been an increase in 2017 in killings by torture by other parties, with the figure now at two to three each week.

In August 2013, a defecting military photographer brought out almost 29,000 photographs of at least 6,786 detainees who died in regime prisons or after being transferred from detention to a military hospital. Human Rights Watch assessed the material and found “evidence of widespread torture, starvation, beatings, and disease”.

In February 2017, Amnesty International assessed that between 5,000 and 13,000 were executed by hanging at Sednaya Prison outside Damascus from 2011 to late 2015. Groups of up to 50 people were hung every week and often twice a week.

Bashar al-Assad has appeared on Syrian currency for the first time, with his portrait on a new 2,000-pound banknote.

The Assad regime hopes to check inflation with the introduction of the highest-value note in Syrian history. The inflation rate, which peaked at 121% in August 2013, is now about 50%.

Previously the highest denomination of Syrian banknote was 1,000 pounds. Assad’s father, the late President Hafez al-Assad, appeared on coins and on an older version of the 1,000-pound note, which is still in circulation.