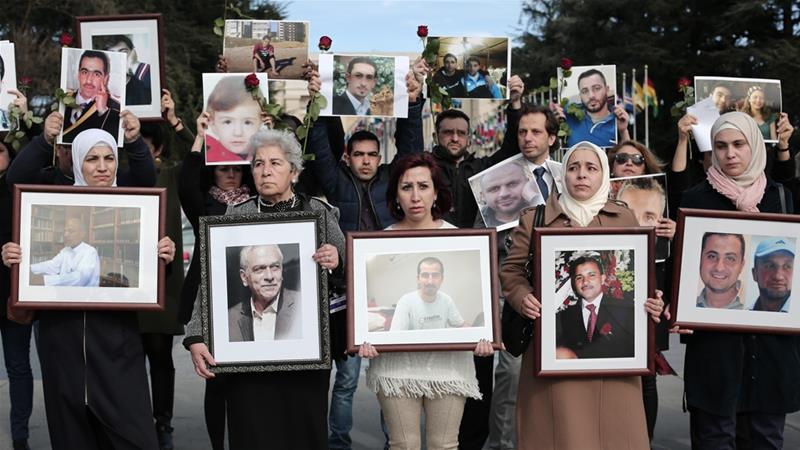 Journalist Riam Dalati, citing an informed source, says the Assad regime will soon confirm the killing and deaths of tens of thousands of detainees since the Syrian uprising began in March 2011.

A source close to #Damascus has revealed that #Aleppo will be 'soon' receiving thousands of detainees death notifications. 'At least half of those deaths may have been executions', according to him. Those executed were held on terrorism charges or detained on the battlefield.

In recent weeks, relatives have been receiving confirmation of executions and deaths from inhumane conditions. The notifications, reportedly covering hundreds and even thousands of prisoners, have come when families have sought civil records from local offices.

The military photographer Caesar, who defected in 2013, brought out pictures of thousands of detainees who were killed or died in custody. Amnesty International estimates that up to 13,000 prisoners were executed in one prison, Sednaya near Damascus, between 2011 and late 2015.

See Assad Regime to 100s of Syria’s Parents: Your Children Died in Detention

Dalati’s information points to a systematic settling of accounts by the Assad regime as it tries to consolidate control in much of Syria.

The source believes the notifications will top 30,000 within a year and possibly go northwards of 50,000. While many have been executed, loads have died of starvation, infections turning into sepsis for lack of medical care, and tuberculosis, among other diseases

But the actual number of dead will exceed even these tens of thousands, as the notifications only cover “formal” detentions. Thousands who died in the various security branches under interrogation are not included: “The numbers do not account for torture casualties. As far as I know, those die within a week of detention in security branches.”

Estimating the total of detainees since 2011 at more than 100,000, the source says he is “extremely doubtful” that many will emerge alive, noting that the majority were peaceful protesters and media activists.

Some of them were only reported to be seen at a protest, while others weren’t regular protesters, even. They could’ve only gone once, but unfortunately, that sealed their fate.