Fact-Checking Trump’s Lies: “Like A Talking Doll Programmed for Eternity” 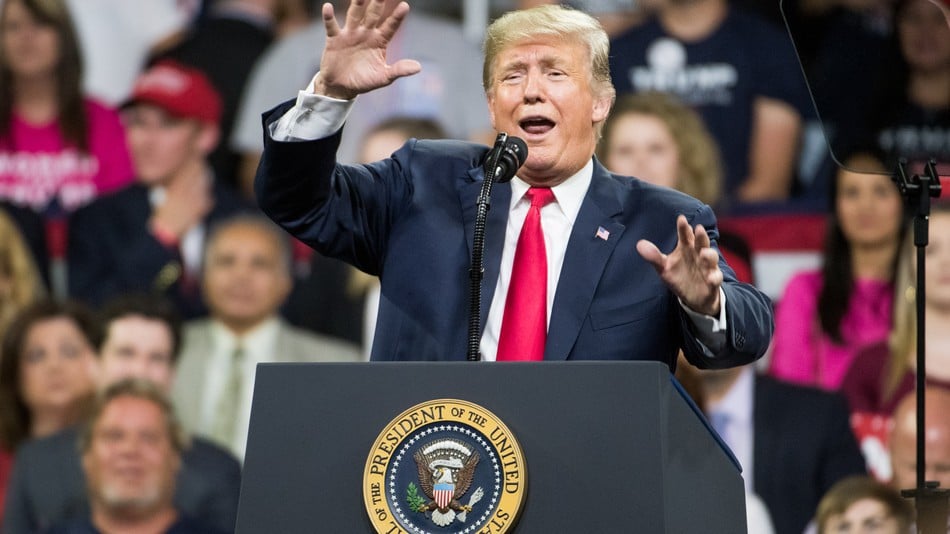 Donald Trump speaks at a rally in Mississippi, October 2, 2018

Donald Trump has uttered almost 6,500 lies or misleading statements in his 22 months in office. Given the deluge, how does anyone keep up with truth v. Trumpian alternative reality?

Daniel Dale of the Toronto Star explains in a column for The Washington Post:

I’ve made it my mission to fact-check every word Donald Trump utters as President. That means trying to watch every speech, read every transcript, decipher every tweet. I’ve accidentally established a reputation for using Twitter to point out that he’s lying within seconds of him telling a lie.

People sometimes ask in response how I can blast out these corrections so quickly. But I have no special talent. My secret is that Trump tells the same lies over and over.

Listen to this president long enough, and you can almost sense when a lie is coming. If Trump tells a story in which an unnamed person calls him “sir,” it’s probably invented. If Trump claims he has set a record, he probably hasn’t. If Trump cites any number at all, the real number is usually smaller.

Fact-checking Trump is kind of like fact-checking one of those talking dolls programmed to say the same phrases for eternity, except if none of those phrases were true. As any parent who owns a squealing Elmo can tell you, the phrases can get tiresome. I’m sure my Twitter followers get bored when I remind them that Trump wasn’t the president who got the Veterans Choice health-care program passed (Barack Obama signed it into law in 2014 ), that US Steel is not building six, seven, eight or nine new plants (it has recently invested in two existing plants) and that foreign governments don’t force their unsavory citizens into the lottery for U.S. green cards (would-be immigrants enter of their own free will).

I keep saying that foreign governments don’t do this, though, because Trump keeps saying they do. I believe that journalists need to be just as tireless in combating the president’s lying as the president is in telling the lies, no matter how repetitive or pedantic it can sometimes make us seem.

VideoCast: “Y’all, We Need to Have An Honest Chat – Trump Lies”

I’m a Canadian reporter, the Washington bureau chief for the Toronto Star. I wasn’t sent here to cover the honesty beat. I do most of the fact-checking on my own time, spending weekday nights and painful Sundays staring at rally transcripts in my pajamas.

My American colleagues have done wonderful investigative and explanatory journalism on Trump. But with some notable exceptions, like The Washington Post’s terrific fact-checking team led by Glenn Kessler, I don’t think US media outlets have been persistent enough in fighting a daily battle for truth itself.

How much lying did Donald Trump do in the run-up to the midterms?

He made 815 false claims in one month. EIGHT HUNDRED FIFTEEN.

I began making a comprehensive list of Trump’s false claims in September 2016, two years after a wild four years covering infamous Toronto Mayor Rob Ford . Having spent so much time contemplating a homegrown liar, it fast became clear to me that Trump’s serial dishonesty was a central feature of his campaign. But his avalanche of deception was being treated as a sideshow to the real news rather than as the news itself — relegated to reporters’ Twitter feeds rather than featured in the headlines where it belonged.

There has been some incremental improvement in the coverage. But I still see the same troubling failures two years later. Even the best of Trump’s interviewers seldom challenge him when he lies to their faces — despite the fact that almost all of the lies have been fact-checked before.

Trump regularly makes 20 to 30 false claims in his rally speeches. But if you watched a network news segment, read an Associated Press article or glanced at the front page of the newspaper in the city that hosted him, you’d typically have no idea that he was so wholly inaccurate.

If a car salesman told you 36 untrue things in 75 minutes, that would probably be the first thing you told your friends about your trip to the dealership. It should have been the first thing we all told our readers about Trump’s August rally in Wilkes-Barre, Pa.

This issue is so urgent because Trump is getting worse and worse. In 2017, he averaged three false claims per day. In 2018, it is about nine per day. In the month leading up to the midterms: a staggering 26 per day. By my count, he’s now at 3,749 false claims since his inauguration. The Post, which tracks both false and misleading claims, has tallied up to 6,420.

Meanwhile, the press continues to blast out the lies unnoted. Two weeks ago, Axios and the AP uncritically tweeted his nonsense about the United States being the only nation to grant birthright citizenship. (They updated after they were criticized.) It happened again Monday, when Trump earned credulous tweets and headlines from ABC, NBC and others for his groundless assertion about “massively infected” ballots in Florida.

There’s nothing especially strategic about much of Trump’s lying; he does it because that is what he has always done. But the president also knows the lies will be broadcast unfiltered to tens of millions of people — by some of the very outlets he disparages as “fake news.”

Many of Trump’s false claims are so transparently wrong that I can fact-check them with a Google search. It’s the comically trivial ones that stand out. I’ll never forget when the Boy Scouts of America got back to me to say that the president of the United States had made up a nonexistent phone call in which the Scouts’ chief executive supposedly told him he had given “the greatest speech that was ever made” to a Scout Jamboree.

For reporting such things, I receive vitriolic emails from some of Trump’s fervent supporters. More interesting to me are the messages from well-meaning skeptics. Why waste your time, people ask, when facts obviously don’t matter anymore?

I disagree. There is a substantial constituency for accurate information about the claims of a president who is, polls suggest, seen as untrustworthy by two-thirds of voters. Even people who generally know that Trump isn’t honest might not know how he is misleading them, and they might want to. The media shouldn’t treat Trump’s devotees as America’s only relevant people.

We also shouldn’t write off every devotee. I’ve met Trump voters who insist that he’s honest, even Trump voters who say they like his lying because it bothers “elites” like me. But I’ve also spoken to Trump voters like Bruce Brown of rural Pennsylvania, who gets much of his information from Fox News and Rush Limbaugh. Soon after I interviewed Brown about last year’s Obamacare debate, he messaged to tell me he’d discovered my list of Trump’s false claims.

I braced for him to say I’d tricked him by sounding friendly, that I, too, was fake news. Instead, he wrote: “Wow…I kind of knew he wasn’t truthful much of the time, but not to the degree of hundreds of lies in such a short period of time. Thanks for opening my eyes.”